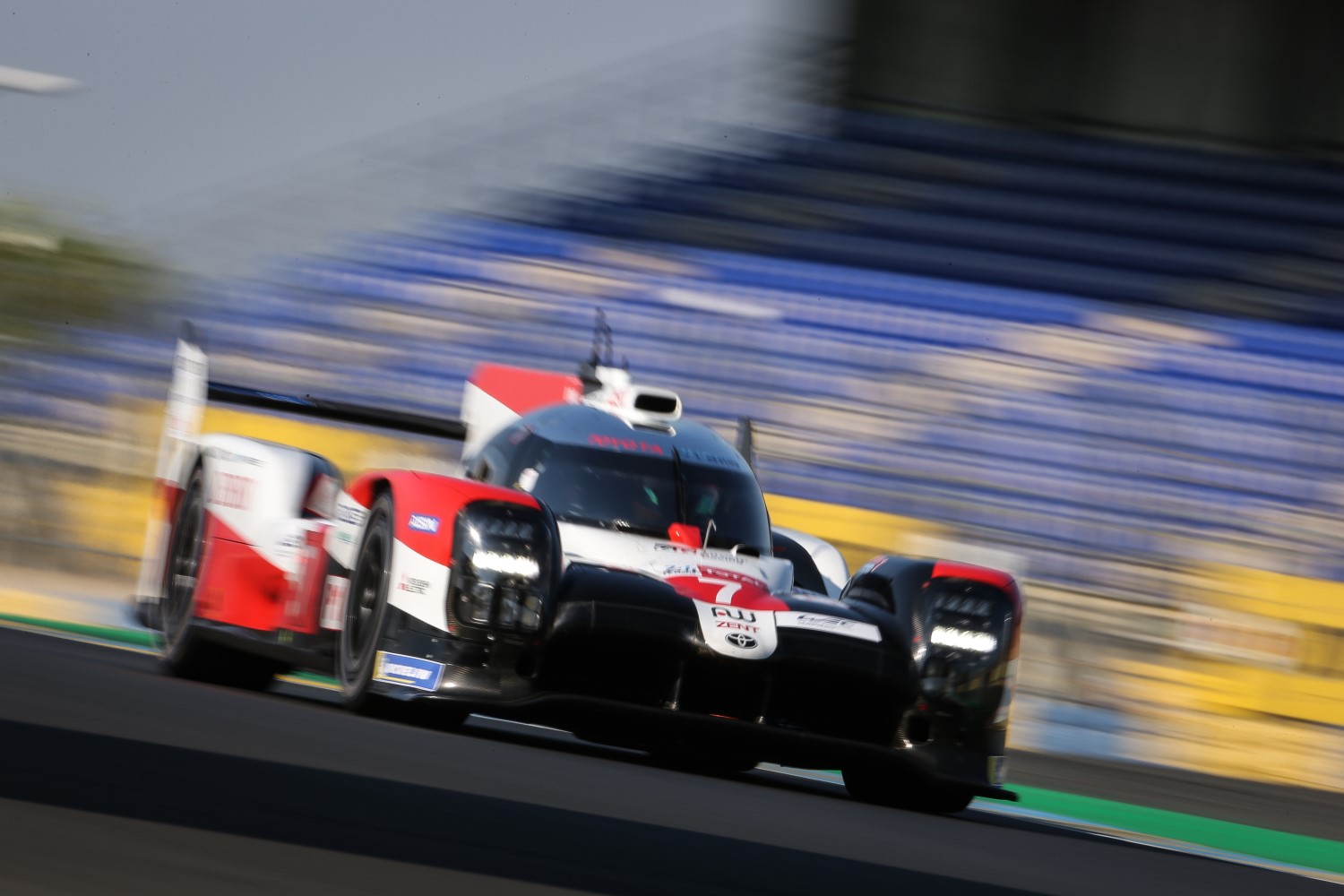 TOYOTA GAZOO Racing set the fastest lap times when track action began prior to the 88th Le Mans 24 Hours, as its challenge for a hat-trick of victories in the legendary French race began strongly.

On a busy practice day, qualifying decided the participants for Friday’s hyperpole contest, in which the leading cars fight for the top six grid positions in each class. Both TS050 HYBRIDs will participate against the other LMP1 contenders, and will challenge for a fourth consecutive TOYOTA pole position at Le Mans.

FIA World Endurance Championship (WEC) leaders Mike Conway, Kamui Kobayashi and José María López, in the #7 TS050 HYBRID, set the pace with a lap of 3mins 17.089secs. Sébastien Buemi and Kazuki Nakajima, winners of the last two Le Mans 24 Hours, partner Brendon Hartley this year in the #8 TS050 HYBRID and they were second quickest, only 0.247secs adrift around the 13.626km circuit.

As with many aspects of life this year, the Le Mans schedule features many changes brought on by the current circumstances. With the traditional pre-event test day not taking place, today was the first time for the cars to drive on the Circuit de la Sarthe since last year’s race in June.

With no previous experience of the latest low-downforce-specification TS050 HYBRID at Le Mans, TOYOTA GAZOO Racing made full use of the extensive practice sessions to prepare for the weekend’s race.

Sébastien had the honor of recording the first timed lap for a TS050 HYBRID at Le Mans this year, at the beginning of the opening three-hour practice. The team used that time to analyze the aerodynamic characteristics of the low-downforce package, fine-tuning the set-up for the best compromise between high speed on the long Mulsanne Straight and appropriate downforce around the sweeping Porsche curves.

With little time between sessions, the pressure was on drivers and team members to avoid any mistakes or mechanical issues which could limit running later in the day. Thanks to their hard work, a busy first session was completed without drama, with Kazuki setting the quickest lap in the #8, 3mins 21.656secs, and Kamui recording the best time for the #7, 0.334secs behind in second.

After a 60-minute break, a second three-hour practice began and the team made further progress on set-up development, analyzing tire performance and comparing mechanical and hybrid settings. The session was interrupted by red flags following accidents for LMP2 cars, and it again finished with the #8 on top, Sébastien having set the best time. The quickest effort from the #7, set by Mike, was second, 0.892secs behind.

A combined total of 127 laps during the two practice sessions, covering 1,730km, accelerated the team’s preparations for qualifying, which took place on a hot evening, with air temperatures of 29°C.

Kamui, who set the fastest-ever Le Mans laps in 2017, and Kazuki, a two-time pole position winner at La Sarthe, took qualifying duties at the beginning of the session. Kazuki set the fastest first two sectors in the #8 car but Kamui’s sector three time earned him the fastest lap.

All drivers had a chance to experience the qualifying session, but those early flying laps on new tires and with low fuel were not beaten, leaving the #7 in first place with the #8 just behind. The #1 Rebellion rounded out the top three, 4.509secs slower.

LMP1 Highlights
•    Kamui Kobayashi set the fastest time out of the LMP1 crews early on with a lap time of 3:17.089 in the No 7. Toyota TS050 Hybrid, 0.247s ahead of the No. 8 sister car with fellow Japanese driver Kazuki Nakajima at the wheel
•    Third quickest was the No. 1 Rebellion R13 Gibson car, the car benefiting from a brand new engine after sitting out of the majority of FP2
•    Le Mans returnees, ByKolles Racing Team were fourth fastest with Frenchman Tom Dillmann setting a time of 3:24.468 in the No.4 Enso CLM/P1/01
•    Rounding out the top five is the No. 3 Rebellion car
•    All five cars will progress to tomorrow’s Hyperpole to determine grid positions for Saturday’s race

LMGTE Pro Highlights
•    It was an Aston Martin 1-2 out of the eight LMGTE Pro entries competing at Le Mans, the top six spots occupied by full-time WEC entrants
•    Marco Sorensen set the fastest time at the wheel of the No. 95 Aston Martin Vantage with a time of 3:50.872, 0.053s ahead of the sister No. 97 car
•    Third and fourth quickest in the session were the AF Corse Ferrari 488 GTE Evo entries (No. 51 and No. 71)
•    After clocking the fifth and sixth fastest times, the two Porsche GT Team No. 91 and No 92 cars make up the final two slots in tomorrow’s Hyperpole

LMGTE Am  Highlights
•    In LMGTE Am, the No. 98 Aston Martin Racing entry was on top with Ross Gunn setting the pace early on with a time of 3:52.778 in the Aston Martin Vantage
•    TF Sport was second, the British squad 0.183s adrift of pace-setters Aston Martin Racing
•    Rounding out the top three in Am qualifying was Gulf Racing in the No. 86 Porsche 911 RSR
•    The final three slots for LMGTE Am entries in Hyperpole were taken by Luzich Racing plus full-time WEC entries Dempsey-Proton Racing and Team Project 1 who finished fourth, fifth and sixth respectively
•    Several lap times were deleted throughout the field due to abuse of track limits