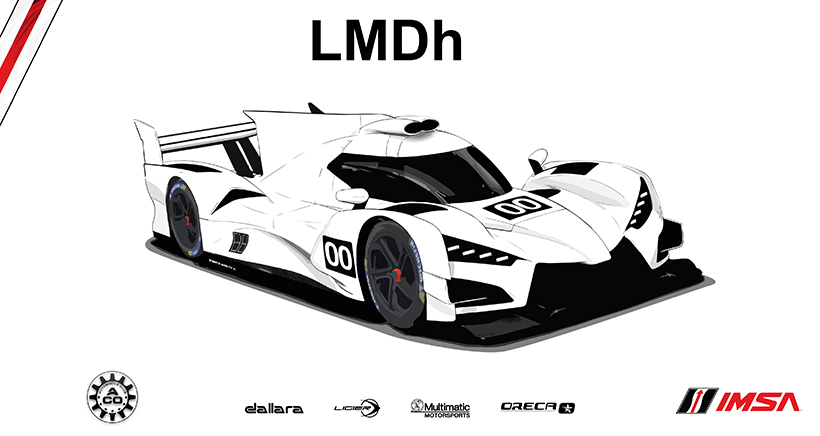 “Since the announcement of the IMSA and ACO convergence back at Daytona in January, and the opportunity for a competitor to enter the same car at both the IMSA WeatherTech SportsCar Championship and the FIA World Endurance Championship, we have received and responded to many specific questions from prestigious automakers,” Doonan said. “We’ve also had those same automakers very involved in the development of the LMDh regulations, and I think all of us are very encouraged and confident, that as we announce the final regulations today, it will bring more names to the table.

“Certainly, the top level of endurance sports car racing has now a very clear, tangible and very bright future. This is, quite frankly, very good news in this difficult global context.”

IMSA Technical Director Matt Kurdock and ACO Technical Director Thierry Bouvet then unveiled the specific technical details for the new LMDh car, which will feature hybrid engine technology. The estimated cost of a complete LMDh car, without the engine, is one million Euro ($1.1-1.2 million).

Major automotive manufacturers will work together with one of four approved chassis constructors – Dallara, Ligier, Multimatic or ORECA – to develop their LMDh race cars. Between the manufacturer’s internal combustion engine and a spec hybrid powertrain system, each LMDh car will have a combined power output of 500 kilowatts (just over 670 horsepower).

Minimum weight will be 1,030 kilograms (just over 2,270 pounds), with a maximum width of two meters (roughly six-and-a-half feet), a maximum length of 5.1 meters (16.7 feet) and a common wheelbase for all cars of 3.15 meters (10.3 feet). Each LMDh car will have advance upper body styling, allowing each automotive manufacturer to bring their own identity and styling cues, while each LMDh will have a controlled underfloor.

Bosch, Williams Advanced Engineering and Xtrac were introduced as hybrid powertrain suppliers for all LMDh cars.

“ACO and IMSA have led a collaborative effort along with the four chassis constructors and the three hybrid powertrain suppliers to come up with a common LMDh solution,” Kurdock said. “The Bosch motor is integrated with the Xtrac gearbox, while the Williams Advanced Engineering battery will be integrated with the Bosch motor controller. This is all in a compact assembly, which installs from underneath the survival cell in an isolated compartment from the driver.”

In January’s historic IMSA-ACO convergence announcement prior to the Rolex 24 At Daytona, it was announced that the LMDh regulations would take effect in 2022. Today’s announcement provides all manufacturers with the specific details they need to propose and develop LMDh programs, and it will be in the hands of the manufacturers to determine if programs can be launched by 2022 amid the global pandemic.

“I think this demonstrates effective work and collaboration between ACO and IMSA,” Fillon said. “Actually, we should have announced this in June had we not had the health crisis.”

“I think the efficiency of the process is a further reflection of the importance of this collaboration between IMSA and the ACO, and the future of endurance sports car racing,” Doonan added. “To have the same car be able to run at Daytona and Le Mans is an expectation of all of our manufacturer partners, and can you only imagine how this is going to make our fans feel?”

The full press conference is available below.