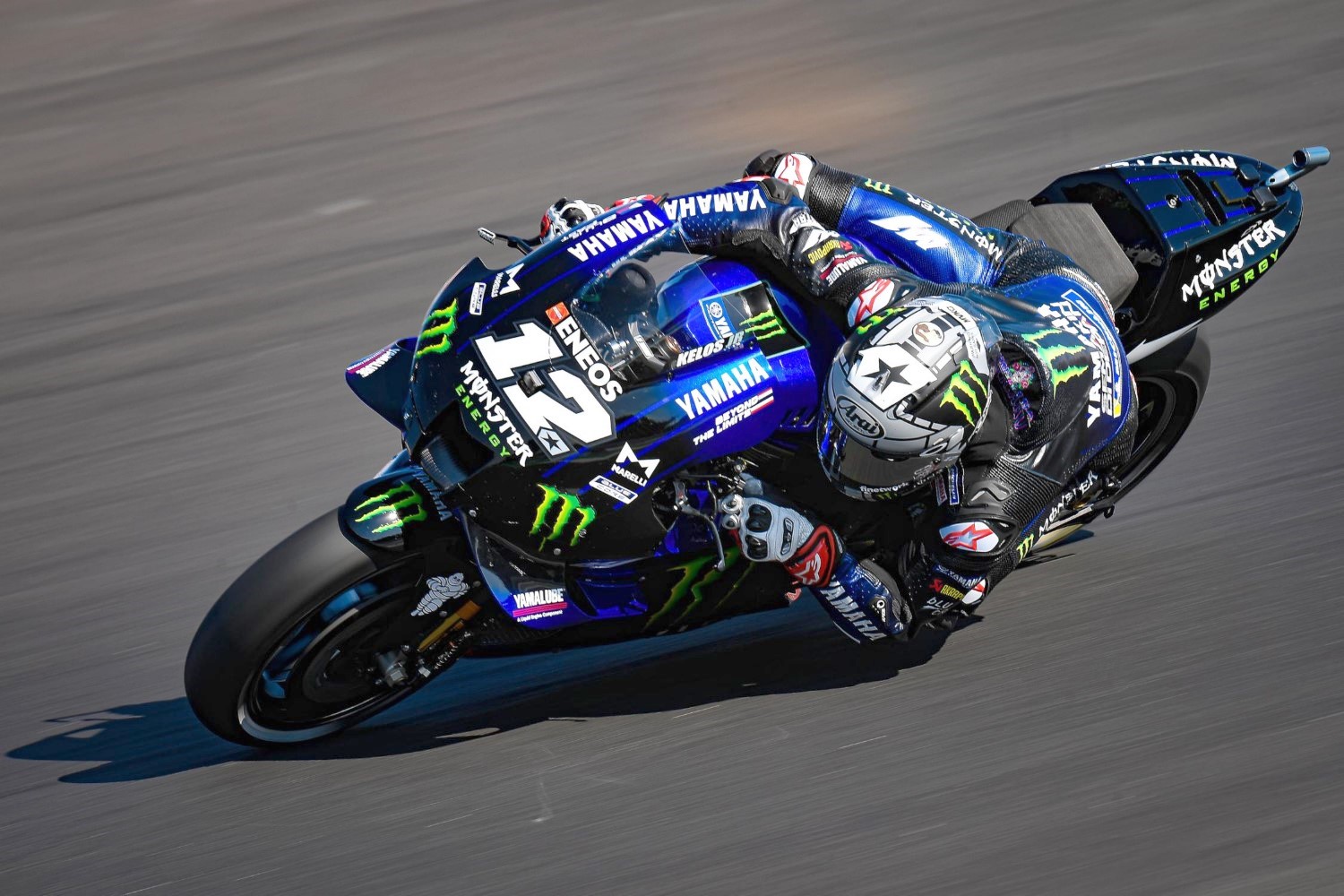 Monster Energy Yamaha MotoGP‘s Maverick Viñales turned his fortunes around on the second day of the Gran Premio dell‘Emilia Romagna e della Riviera di Rimini. The Factory Yamaha man kept the positive momentum from this morning going in the afternoon, and secured his third-consecutive Misano pole position, setting a new All Time Lap Record at the same time.

Before Q2 got underway, there was a big Q1 session taking place. World Championship leader Andrea Dovizioso (Ducati Team) needed to get into Q2 to have any chance of fighting for the rostrum – and he did. A Ducati duo of Dovizioso and Q1’s fastest rider Miller made it through into the pole position shootout, Miller setting a best time of 1:31.559 – a lap that would have placed the Australian 5th on the combined Free Practice times.

So then, after a tantalizing Q1 session, Q2 kicked off. Viñales set the first benchmark, a 1:31.647, before he immediately got a box call from his team – another two-stop strategy incoming for the number 12? Bagnaia slotted into P2 on his first flying lap but then the Italian really got the hammer down on his second lap – a 1:31.313 handing Bagnaia provisional pole. Quartararo slotted into P2 less than a tenth off Pecco, with Red Bull KTM Factory Racing’s Brad Binder going third ahead of Viñales and teammate Pol Espargaro.

Quartararo was right on the money again though, he was 0.032 off Pecco coming through Sector 3 but the Frenchman made a mistake coming into Turn 16 – lap over for El Diablo. After the first runs, Valentino Rossi (Monster Energy Yamaha MotoGP) was provisional P6 but as the riders pitted, his teammate Viñales was already on his second run – and flying. Viñales nailed the lap but didn’t quite manage to beat Bagnaia, however, he did go P2 – 0.073 off – and on the next lap, the number 12 was flying again.

Viñales was a quarter of a second up through the first sector, but he lost time around Sector 2 and 3, with just 0.013 covering Viñales and Bagnaia into the final sector. The YZR-M1 rider was on rails through Sector 4 though and sure enough, a Yamaha was at the summit – a 1:31.268 was now the time to beat for pole position. Joan Mir (Team Suzuki Ecstar) – one of the pre-race favorites – was lingering down in P10 after his opening few flying laps, that one-lap pace still hampering the Spaniard and Suzuki on Saturday afternoons. Dovizioso was P8 heading into the final three minutes, with his nearest title rival Quartararo P3.

Two minutes to go, Dovizioso found some time and moved up into P6 – a provisional second row start. Tucked in behind VR46 Academy protégé Bagnaia, Rossi improved from P9 to P5 – shuffling Dovizioso onto Row 3. Meanwhile, Binder and Bagnaia were both setting red sectors with the South African going P3 – a great lap, but an even greater one was coming in for Bagnaia. The Ducati rider rounded the final corner with Rossi and Miller in tow, and it was a scintillating 1:30.973. However, the fastest ever lap around Misano was cancelled, Bagnaia clearly exceeding track limits on the exit of Turn 16.

Teammate Miller’s lap put the Aussie second behind Bagnaia’s soon-to-be cancelled lap time, but Viñales was again stringing together a marvelous lap. The San Marino GP polesitter would take the checkered flag in P1 with another new Misano outright lap record, Quartararo set a personal best on his last lap to claim P3 – 0.069 off Miller in P2. Pol Espargaro set a 1:31.308 on his final lap to beat Bagnaia’s second fastest time, the KTM rider earning his second best qualifying result of the season. Bagnaia didn’t seem too disheartened, he knows he’s got a great chance of the win from P5 on the grid.

Binder joins his KTM teammate on Row 2 after qualifying in sixth place – that’s the rookie’s best Saturday afternoon result of 2020. Rossi spearheads the third row in P7, The Doctor just three tenths away from Viñales’ time as the nine-time World Champion sits ahead of close friend and San Marino GP winner Franco Morbidelli (Petronas Yamaha SRT) – P8 for Morbidelli, who is nursing an illness this weekend.

Danilo Petrucci (Ducati Team) eventually got the better of teammate Dovizioso, the factory GP20 machines will line-up P9 and P10 for the Emilia Romagna GP on Sunday afternoon. What can the title chase leader do from P10? And what can Mir do from P11 on the grid? The Suzuki rider has been one of the leading contenders throughout the weekend, but finishing outside the top 10 in Q2 wasn’t how the script was meant to be written – 0.540 covering the leading 11 riders. Takaaki Nakagami (LCR Honda Idemitsu) crashed at Turn 15 in the early stages and after crashing at the same corner in FP4, Nakagami was unable to head back out on track – rider ok.

Maverick Viñales
“We worked really hard today, and we got the job done. We hope that tomorrow all the hard work will pay off as well. We are going to try the maximum. I’m very happy and comfortable with the bike. I was very relaxed in FP4 in conditions that are similar to tomorrow’s race, so we will see. Today I focused mainly on riding with a full fuel tank and the race set-up. Tomorrow is a new opportunity to improve. If we don’t, we will try again at the next race in Montmelo. We have good potential, and I think we can still do better. We’re going to try to be at the best level.”