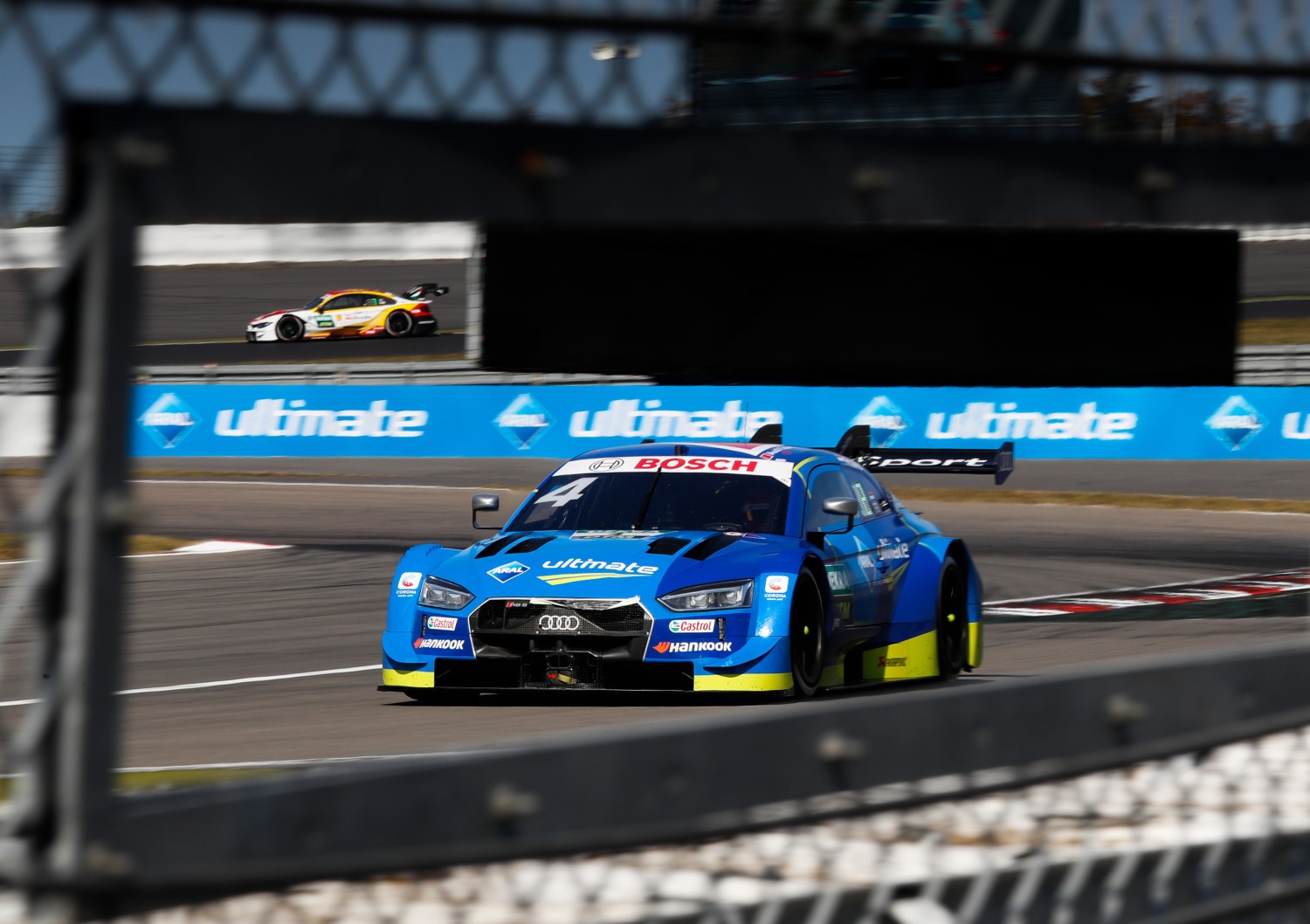 Spectators during the sixth season round of the DTM were treated with touring car action as good as it comes. Saturday’s first race at the 3.6 kilometers short sprint circuit lay-out of the Nürburgring had everything in store. At the end, Robin Frijns (NED) emerged as the buoyant winner. He came to the fore with a perfect start and never was to lose his lead again, in spite of all the efforts by his opponents. Defending champion René Rast (GER, Audi), already a three-time race winner at the sprint circuit, crossed the finish line in second place. With Marco Wittmann (GER) in third place, a BMW driver again made it onto the podium. Five Audis and five BMWs in the top ten reflected a good balance between the two brands.

The start of the race already was highly entertaining: Robin Frijns made a rocket start and immediately moved past pole sitter Rast. Subsequently, Nico Müller made an attempt to overtake Rast on the outside of turn 1, but had to give in and, in turn, lost one place to a charging Philipp Eng (AUT, BMW). Further down in the field, there were intense duels in the first laps, some bodywork contact included. As a result, the first safety car intervention of the race followed a few laps later, called by race control because of debris on track. All drivers had already used the time prior to the first caution for their mandatory pit stops. That set the stage for a thrilling battle for positions, free of any tactics.

The first restart didn’t result into any changes in the top three, but there was drama for points’ leader Nico Müller: the Swiss spun after contact with Jamie Green and dropped to the back of the field. A reason for his team Abt to opt for a different pit stop strategy and to call Müller in for a tire change while the group of the front-runners remained out on track. That changed from lap 15 onwards, as Loïc Duval (FRA, Audi) caused the second safety car intervention after an excursion into the gravel trap and subsequent contact with the tire stacks. The Frenchman was able to get his Audi RS 5 DTM back on track and initially managed to continue.

Initially, the second restart, in double-file formation in Indy Car fashion, didn’t result into any changes in the top three. In turn 2, however, Wittmann took his chance and overtook Rast with a skillful move on the outside. A three-way battle between Lucas Auer (AUT, BMW), Fabio Scherer (SUI, Audi) and Duval led to a collision between the two Audi drivers who retired from the race. That triggered the third and final safety car intervention, after which the race could be completed without any further incidents. This time, however, Rast outpaced Wittmann, reclaimed second place and mounted a final challenge against Frijns. Eventually, he finished a little over half a second down on the winner.

Going into the twelfth race of the 2020 DTM season (Sunday from 13.00 hrs live on SAT.1), Nico Müller is still the points’ leader at 216 points, having kept the damage limited by still finishing fifth after his spin. With his victory, Frijns is catching up and is now only 13 points down, Rast remains third at 180 points.

Robin Frijns (NED), Audi, winner
“That was a difficult race. Defending my position wasn’t easy. It really was nerve-wrecking in the cockpit. Every time I pulled a gap, and then the safety car came out, and it all started again from scratch. Basically, my start was good, and I was able to build a slight advantage. At the end, René Rast came pretty close, especially in turns one and nine. I knew that I couldn’t make any mistakes. That was crucial, but I managed to make it to the finish as the winner. I was aware that Nico Müller had quite an action-packed race, so it was all the more important to score these ‘big points.”

René Rast (GER), Audi, 2nd place
“The start was difficult because, unfortunately, I wasn’t able to do any practice starts on Friday. During the restarts from second place, I once didn’t get the perfect line, which enabled Marco Wittmann to get through. At the next Indy restart, it was the other way round again. I knew that it would be down to the final lap, but my attack was a little too late. Okay, I did make up some points to Nico Müller, but I lost points to Robin Frijns. One of the two is always in front of me. After the rather mediocre Friday, pole position and second place in the race definitely were good results for me.”

Marco Wittmann (GER), BMW, 3rd place
“My start was quite decent, but with the first safety car intervention, things became a bit chaotic. Of the three Indy restarts, I was able to use one to get past René Rast, but the next time, it was the other way round. Because most drivers had already made their mandatory pit stops before the first safety car intervention, it was rather performance than strategy that determined the race. Nobody had to manage the tires either as they didn’t wear out that much as a result of the three safety car interventions for several laps. Anyway, I am very happy to have made it onto the podium from sixth on the grid.”