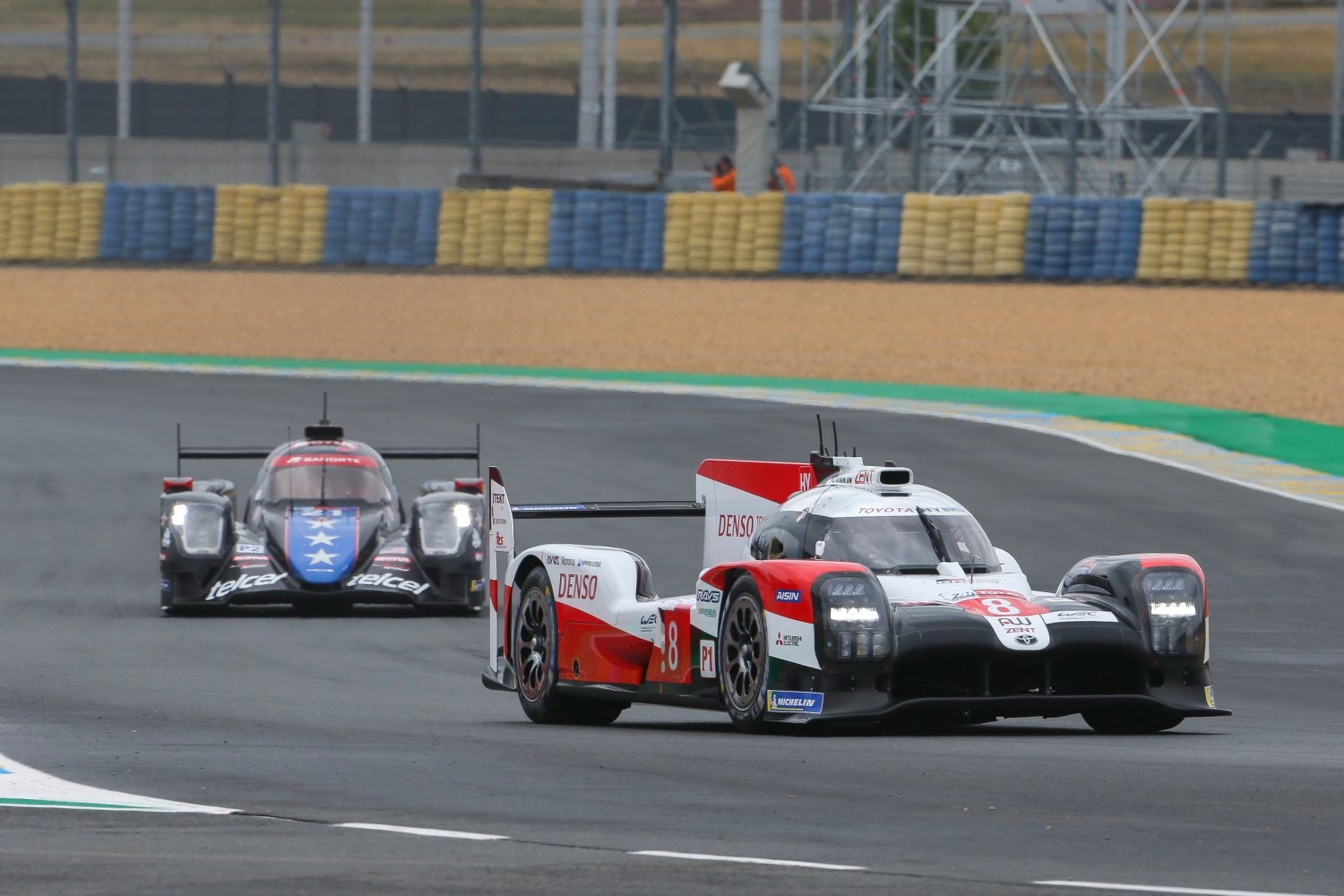 The sun has finally risen after a long 12 hours of darkness for this 88th edition of the 24 Hours of Le Mans and the race has entered its final quarter.

Below are the highlights after 18 hours of racing.  There have now been 10 retirements and 1 disqualification from the 59 cars which started at 14h30 yesterday.

LMP1 Highlights
•    The No.8 Toyota TS050 Hybrid of Sébastien Buemi, Kazuki Nakajima and Brendon Hartley holds a 3-lap lead over the No.1 Rebellion Racing R13 Gibson.
•    Just after the 14th hour, the No.7 Toyota – having led for most of the first half of the race – was backed into the garage for a turbo replacement.  After almost 30 minutes in           the pits, it is back in the race in 4th place, 6 laps down to the leader.
•    Both Rebellion Racing entries are running strongly in 2nd and 3rd – the full season WEC entry of Bruno Senna, Norman Nato and Gustavo Menezes holding a one lap                 advantage.
•    Lap times have come down due to ideal ambient conditions and the continued dry conditions.

•    The Aston Martin / Ferrari battle continues to play out, with the No.97 Vantage AMR battling hard with the No.51 AF Corse Ferrari 488 GTE EVO throughout.
•    Alexander Lynn leads James Calado in the 2019 LM24 class winning entry by 32s after a recent brake pad and disc change on the Ferrari.
•    Aston Martin’s No.95 Dane train is in 3rd, and the No.71 Ferrari in 4th
•    The Porsche GT Team’s No.91 has suffered the same power steering issues as the No.92 911 RSR-19 and dropped back to 9 laps behind the class leader.

LMP2 Highlights
•    United Autosports continues to dominate the biggest class in the race, with the lead having changed several times between the team’s two entries. Paul di Resta in the                 WEC’s No.22 is now 65s ahead of the No.38 JOTA ORECA 07 Gibson of Roberto Gonzalez.
•    Third in class is the No.26 G-Drive Racing Aurus 01-Gibson with Mikkel Jensen at the wheel.
•    Filipe Albuquerque in the No.22 completed a solid triple stint in the early hours of the morning, despite battling with blurred vision due to a windscreen covered in oil from the       No.32 sister car.
•    Job van Uitert was forced to bring his No.32 into the pits at 06h19 because of the oil leak and the car lost 46 minutes on pitlane changing a fractured oil pipe.
•    Racing Team Nederland has had further delays following early engine overheating issues after a tangle with an LMGTE Pro car.  They are back out on track but the balance         of the car has been affected. The 24-strong LMP2 entry is now down to 18.

LMGTE Am Highlights
•    TF Sport has had a faultless run to this point and has a firm hold on the lead in class. Salih Yoluc has a lead of over 2 minutes from the No.77 Dempsey Proton Racing entry       of Christian Ried.
•    Third in class is the No.83 AF Corse Ferrari 488 GTE EVO of Emmanuel Collard.
•    Long-time contender for class victory, the No.98 Aston Martin Vantage AMR, has suffered a heart-breaking set back following suspension failure.  Ross Gunn managed to           limp the car back into the pits just before the start of the 16th hour for repairs, re-joining but now 6 laps down to the leader.