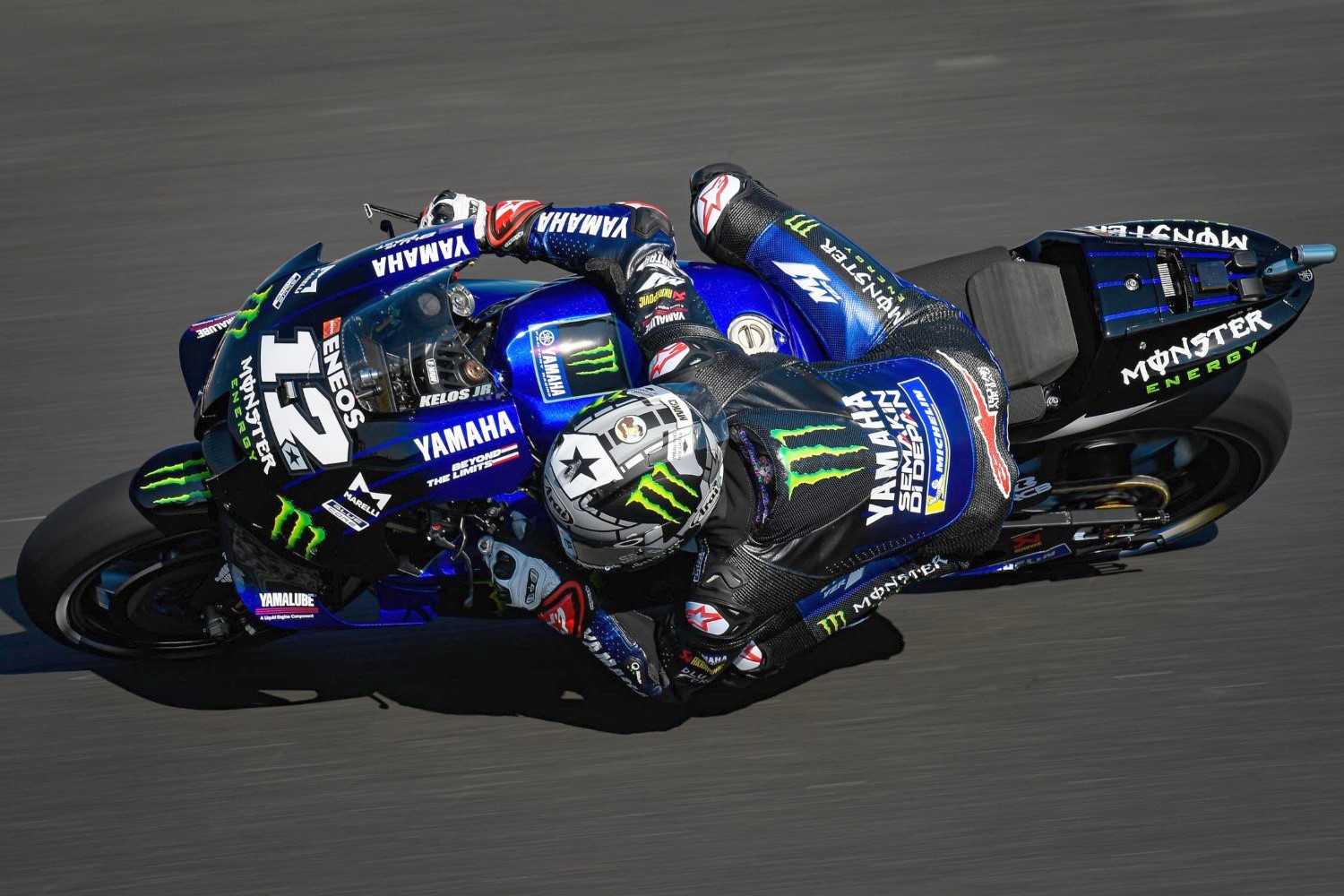 Monster Energy Yamaha MotoGP‘s Maverick Viñales got his revenge the second time round at the Misano World Circuit Marco Simoncelli. He executed his plan perfectly and claimed his eighth premier class victory, his seventh with Yamaha.

Viñales had a perfect start from pole and took the holeshot. The Yamaha man planned on pushing right from the start, and that’s exactly what he did. He set a blistering hot pace that only Francesco Bagnaia was able to match.

Bagnaia had got past teammate Miller for P2 and Binder was then 3rd at Turn 10 as he left Quartararo in his wake. The rookie was on a charge but then Binder was down at Turn 14, with Bagnaia setting the fastest lap of the race as the Italian locked his radar firmly onto the back of Viñales’ YZR-M1. Bagnaia closed Viñales down again on the following lap as Pol Espargaro set the fastest lap of the race in P3, with Binder crashing again at Turn 1 to end his race.

The pair were riding on the limit ahead of the pack, consistently increasing their lead. Then, on lap 6, Viñales made a small mistake in Turn 4 that made him go wide. He reluctantly handed over the lead but didn‘t stop pushing.

The gap between him and Bagnaia stretched to 1.5s, but it didn‘t extend beyond that. The Spaniard also still had a comfortable advantage over the rider in third place, so he could afford to focus on saving his tires for the final stages of the race.

With ten laps to go, the time had come for the number-12 to put pressure on Bagnaia. He was inching closer, and the gap was reduced to just over a second when the race leader crashed. Viñales was now back in P1 with 7 laps left to go to the checkered flag. Just focusing on getting the bike home, he cruised towards his first victory of the 2020 season, which he secured with a still dominant 2.425s advantage. This is his eighth premier class GP win and his seventh with Yamaha.

Further back, Mir had now managed to get to the front of the battle for the lower ends of the top 10 to have some clean air in front of hm – the gap to Quartararo was 3.5 seconds on Lap 7. A few more laps went by and the gap between the leading two wasn’t going above 0.6 seconds, with Viñales slightly quicker than Bagnaia. But then the Pramac Racing started to up the ante, Bagnaia’s lead was up to the magic one-second mark on Lap 11. A couple of laps later and the lead was up to 1.4 seconds, with Quartararo setting his fastest lap of the race on Lap 11 – with Mir going even quicker behind. Bagnaia had got the gap up to over a second but Viñales wasn’t letting the sophomore pull away, the lead was tinkering between 1.1 and 1.4 seconds as Quartararo reeled in Espargaro. Mir, with eight laps to go, was now under two seconds away from the podium fight.

Huge drama then unfolded with seven laps to go. The cameras were focused on the Pol Espargaro-Quartararo battle that was intensifying, but suddenly the scrapes of a bike hitting the deck were heard. Someone had crashed, and it was race leader Bagnaia. Turn 6 – where he crashed in FP3 – was the location for heartbreak as a dream maiden MotoGP win slipped away from the Italian’s grasp on home soil.

This left Viñales was a marvelous four-second lead. Now, this was Viñales’ race to lose as the attention turned to who would join him on the podium – barring a mistake from the polesitter of course. Quartararo was showing a wheel to Espargaro but the latter was defending brilliantly on his KTM. But cue the jaws music – a GSX-RR was swiftly approaching the KTM and Yamaha. Mir was 0.6 faster than the duo ahead of him with six laps to go and sure enough, it became a three-rider dog fight for the remaining two spots on the podium. And also with six laps to go, Quartararo was handed a track limits warning – something that would prove to be costly for El Diablo in a few minutes time.

With three laps to go, Mir struck. Turn 2 was Mir’s chosen mugging spot and the Spaniard was underneath and past Quartararo, and it wasn’t long before Mir was up to P2. On the next lap at Turn 1, Mir was through. Quartararo then pounced at Turn 3 as Espargaro went from P2 to P4 in a matter of corners, and it seemed that was that for the podium fight with Espargaro struggling with his tires.

Then, yet more drama. The news came through that Quartararo was handed a long-lap penalty for repeatedly exceeding track limits, his only time to do it was on the last lap. Quartararo was just over a second clear of Espargaro and four seconds ahead of fifth place Miguel Oliveira (Red Bull KTM Tech3) – so it looked like he was going to lose P3. However, Quartararo didn’t take the long lap penalty and that meant he would be handed a three-second penalty at the end of the race.

Oliveira was stunning in the second half of the race to finish P5, the Portuguese rider had the race leader’s pace but starting P15 ultimately cost the Styrian GP winner of a podium. The leading Honda across the line was Takaaki Nakagami (LCR Honda Idemitsu) in P6, 11 seconds from the win. The Japanese rider also showing strong late-race pace to get the better of Repsol Honda Team’s Alex Marquez and Dovizioso. 7th went the way of reigning Moto2™ World Champion Marquez who produced his best MotoGP™ ride to date, finishing seven tenths away from Nakagami. A phenomenal effort from the rookie, who beats Dovizioso by over a second at Misano as the Italian once again struggled. Dovi still holds the Championship lead, testament to how close and unpredictable the 2020 title race is.

Iker Lecuona (Red Bull KTM Tech3) crashed out of P6 with two and bit laps to go after stringing together a fantastic race, gutting for the Spaniard who was mightily impressive on Sunday. Rossi pulled in with 12 laps to go after his crash, with Miller encountering engine issues early on that he later revealed was caused by one of Quartararo’s visor tear-offs blocking the air filter, forcing him to retire. Tito Rabat (Esponsorama Racing) crashed at Turn 1 on Lap 12 – rider ok.

Four riders, four points. That’s how it stands at the top of the MotoGP™ World Championship after the Misano double-header, Dovizioso, Quartararo, Viñales and Mir the quartet who lead the way. But this is 2020, and this is MotoGP™ – it could all change in the blink of an eye and with Barcelona coming up in less than a week’s time, we don’t have to wait long to witness more unrivalled premier class action.

“We did an amazing job this weekend, and we prepared really well for this race. Pecco was very fast, and I was pushing a lot throughout and trying to save a bit of tire for the last ten laps. Then I started to push at the end, and I thought I was catching up with Pecco. But after he made a mistake, I just focused on keeping the bike with both wheels on the ground, trying to not crash and take the maximum amount of points. It’s fantastic!

“I‘m very happy, because my mentality is exactly the same as it was last weekend and during the last races, but we just found a set-up that’s a bit better for when we ride with 20 liters at the beginning of the race. I actually made a mistake in Turn 4. I was pushing a lot in the beginning, trying to open the gap. But when we were with only two riders, it was good. I want to say ’Thank you‘ to all the people who are supporting me at home. They know we‘ve had some tough times in our team, but it seems like we‘ve passed it, right now we have some good luck, and that’s what counts. I‘m very happy and appreciate all the work from the team, and we need to continue like that, pushing very hard, because we have a lot more potential.”