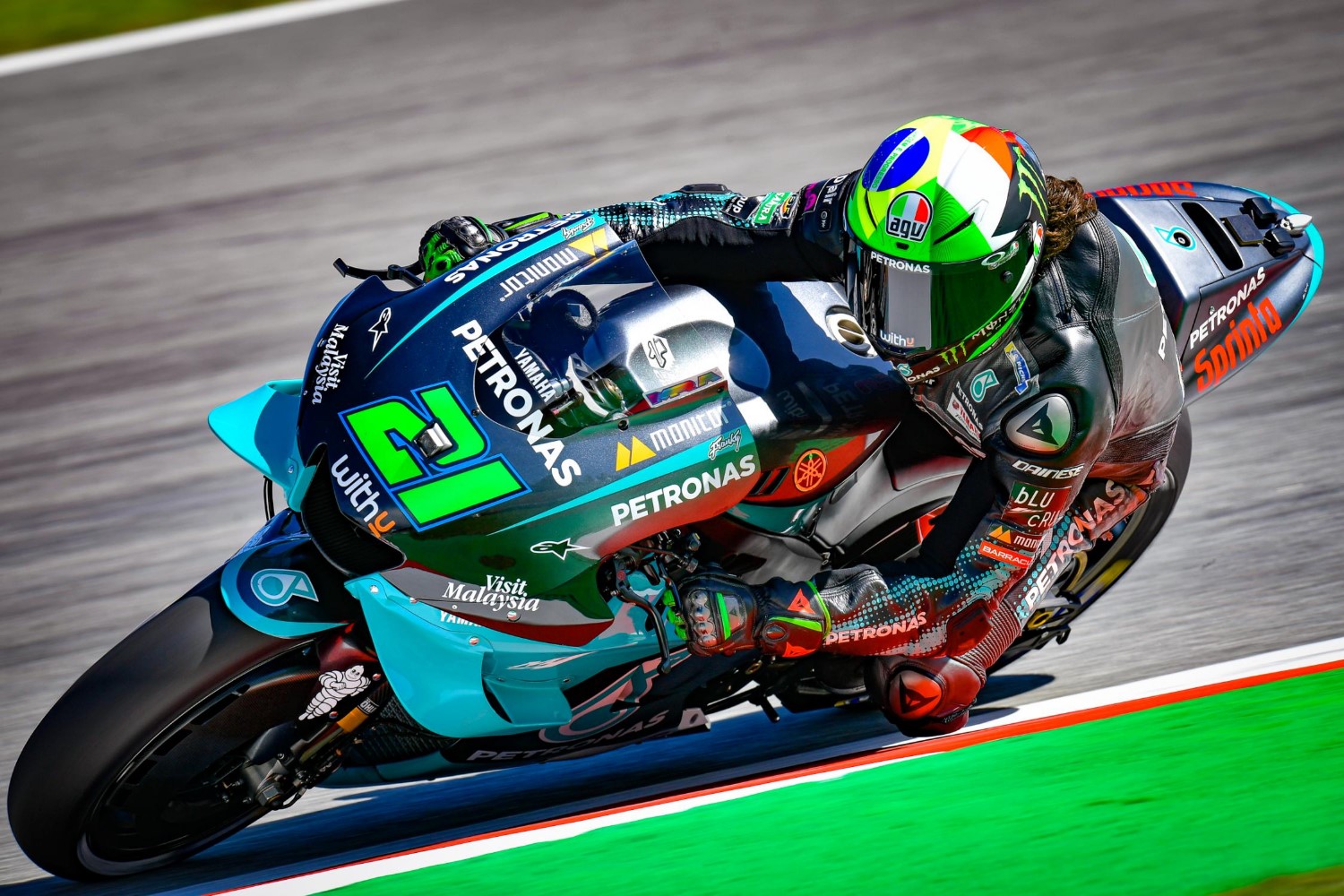 The battle for pole came down to the four Yamaha riders at the end of Q2, with Morbidelli heading Fabio Quartararo and Valentino Rossi.

Rossi set the early pace on his factory Yamaha with a 1m39.881s, though this was immediately topped by Maverick Vinales with a 1m39.655s.

Morbidelli then took over top spot with a 1m39.110s to end the first runs fastest, while teammate Quartararo was only seventh after making a mistake on the way into Turn 10.

But Morbidelli dug deep on his final lap stunning lap of 1m38.798s to claim his first pole in the premier class and his first in grand prix racing since his final Moto2 season in 2017.

Quartararo went for one final lap just as the checkered flag came out, but was unable to improve on second, with Rossi completing the front row for the first time this season.

Ahead of Q2, a huge 15 minutes in Q1 got underway and emerging from it was Jack Miller (Pramac Racing) with the fastest lap of the weekend. The Australian set a 1:39.399 to head Takaaki Nakagami (LCR Honda Idemitsu), but it was a disaster for Championship leader Andrea Dovizioso (Ducati Team) – the Italian finishing P7 in Q1, seeing him start 17th in Barcelona. Dovizioso has a huge Sunday afternoon ahead of him if he’s to keep the title lead heading to Le Mans.

Shortly after, it was a Yamaha stranglehold at the beginning of Q2 as Morbidelli set the first banker, with Rossi then taking over at the top before his teammate Maverick Viñales quickly found himself at the summit. Meanwhile, Quartararo ran wide as he got his YZR-M1 all sorts of crossed up at the tricky Turn 10, before his teammate Morbidelli slammed in the fastest lap of the weekend to go provisional pole again – a 1:39.110.

Miguel Oliveira (Red Bull KTM Tech3) then also got it wrong a Turn 10 but unlike Quartararo, Oliveira was down – thankfully unhurt. Getting the hammer down then was two Ducatis – Miller and Johann Zarco (Esponsorama Racing). Miller only had one set of fresh soft tires available after coming through Q1, but the Aussie made it count – the future factory Ducati rider was up into P2, just 0.115 off Morbidelli.

After running wide at Turn 10 in the early stages, Quartararo rumbled out of pitlane with five minutes to go having not set a lap time. The Frenchman and last year’s pole man was P12, but that was soon going to change as four Yamahas lit up the timing screens. Halfway around the lap, Quartararo was 0.132 under Morbidelli’s time – the latter going even quicker though. El Diablo crossed the line and managed to strike a 1:39.008, with Morbidelli unable to improve – nor did Viñales. Rossi did though, The Doctor launched from P7 to P3 with his time and it was a provisional Yamaha front row lockout – Miller the only rider to mix it with the Iwata factory riders for the time being.

On the next lap, Morbidelli was flying – again. The San Marino GP winner was 0.082 under Quartararo’s time at Sector 3, but could he hold it through Sector 4? Well, Morbidelli did more than hold his advantage. Sector 4 was a stunner for the number 21 as he shot to the top, beating Quartararo’s time by over two tenths to lay down the gauntlet. Further behind, Pol Espargaro (Red Bull KTM Factory Racing) went P6 as Quartararo went in search of a final lap charge. It didn’t prevail for the MotoGP™ sophomore, but a lap was being strung together by the rider just ahead of him – Zarco. The Frenchman put in a solid last flying lap to go P6, shoving former teammate Pol Espargaro off the second row at the checkered flag.

No one had an answer for Morbidelli though, a first premier class pole position is his – and what a way to do it. Quartararo is normally the Petronas Yamaha SRT rider who takes the Saturday afternoon spoils, but not today in Barcelona. The man second in the Championship will launch from P2 though, ahead of all his closest challengers in the overall standings. Rossi makes it a Yamaha Q2 1-2-3 for the second time in three races – the nine-time World Champion sounding confident ahead of Sunday’s battle.

Miller did an awesome job to qualify P4 as the leading Ducati rider, beating Viñales by over a tenth. The latter will be slightly disappointed with P5 after showing supreme pace in Free Practice, Viñales has to hope he gets a good getaway and doesn’t get mired by the fast starting Ducatis either side of him on the grid. To the right of Viñales is Zarco, his final lap was just 0.007 slower than Viñales’ effort to see Zarco start from his best grid slot since his Czech GP pole.

Pol Espargaro spearheads Row 3 ahead of Joan Mir (Team Suzuki Ecstar). Both riders looked very good in FP4 and will be strong contenders in the race if they can get a good start. Ducati Team’s Danilo Petrucci joins the Spaniards on the third row – his second consecutive P9 start, with Brad Binder (Red Bull KTM Factory Racing) completing the top 10. Nakagami claimed P11 after coming through Q1, Oliveira couldn’t regain his speed shown in FP3 after his crash to line-up P12 for Sunday’s battle.