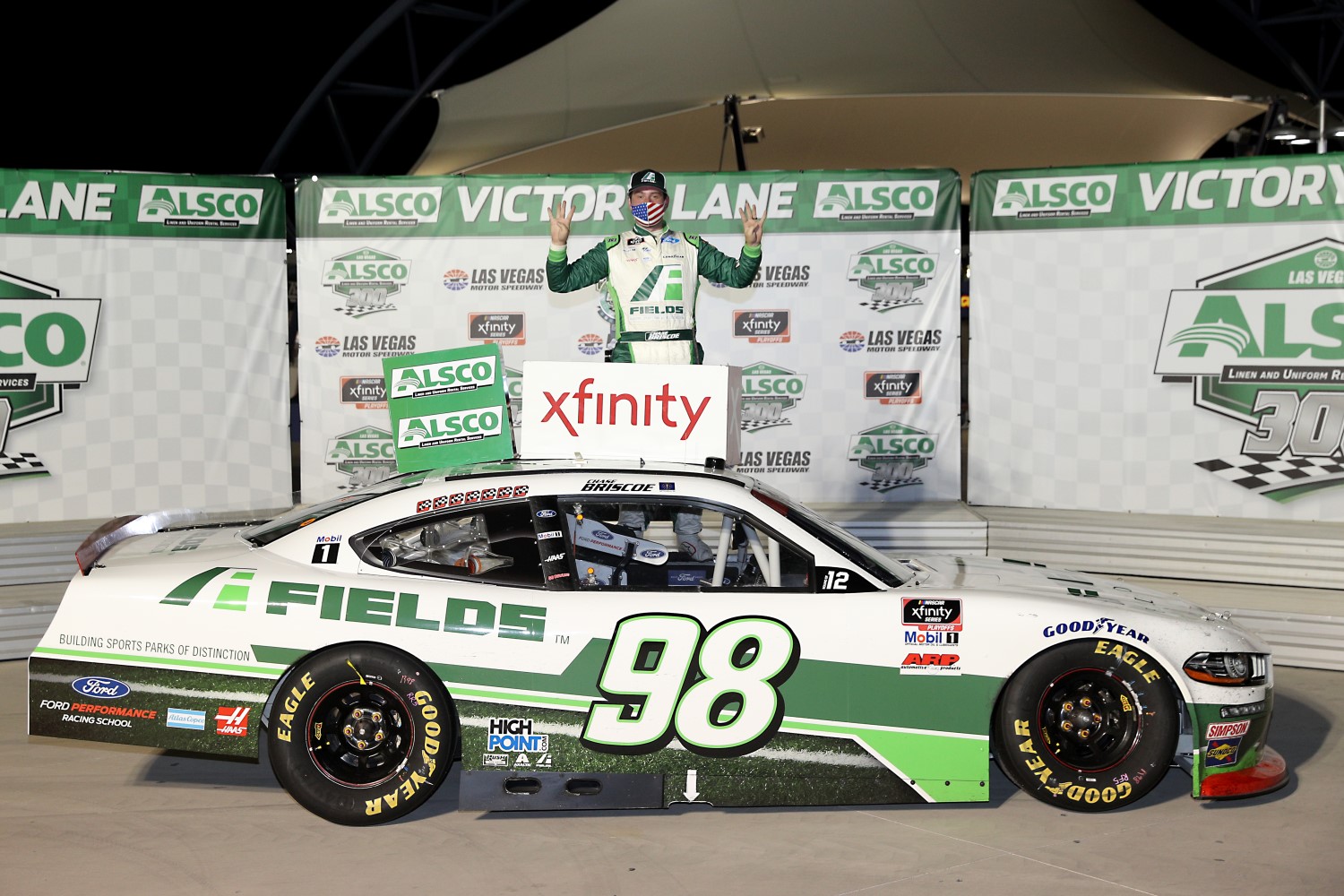 Chase Briscoe began his 2020 NASCAR Xfinity Series Playoff run at Las Vegas Motor Speedway Saturday night just as he has competed so much of the regular season – out front.

Briscoe led a dominating and career-high 164 of the 200-laps, and swept both stage victories in the Alsco 300 playoff opener en route to his series best eighth victory of the season. He joins NASCAR legends Sam Ard and Jack Ingram as the only drivers to amass eight wins in the opening 27 races of an Xfinity Series season.

Briscoe’s No. 98 Stewart-Haas Racing Ford beat Las Vegas native Noah Gragson’s No. 9 JR Motorsports Chevy by a healthy 1.370-seconds – with Briscoe forced to hold off the field on a late, furious race restart with 10 laps remaining making a strong statement about his championship intentions.

“Just didn’t have enough for the 98 [Briscoe], a lot of race cars out here and one space shuttle,” Gragson said of Briscoe.

The victory earns the 25-year-old Indiana-native Briscoe an automatic bid into the second round of the playoffs with two races – at Talladega Superspeedway and the Charlotte Roval – still remaining in this opening playoff round. It’s the first time in his two seasons at the Xfinity Series level that Briscoe has swept both stage victories en route to a race win.

Daniel Hemric finished third, one of only two non-Playoff drivers among the top 10 at Vegas. Playoff competitors Justin Allgaier and Ryan Sieg rounded out the top five. Regular season champion Austin Cindric was sixth, followed by Michael Annett, Anthony Alfredo (the other non-playoff driver in the top 10), Harrison Burton and Justin Haley.

While restarts were dramatic as drivers made daring moves to challenge Briscoe and negotiate their places, Briscoe was inevitably able to hold his place out front. He led by more than four seconds with 25 laps remaining and had increased that advantage to more than six seconds with 20 laps remaining when he radioed to his crew that he felt a small vibration. He was reminded of his healthy lead and reassured it was his race to manage – that all was okay. And indeed it was for Briscoe.

“First off, incredible car by everybody at Stewart-Haas and that made my job way too easy, honestly,” Briscoe said, acknowledging, “We’ve had a lot of wins this year, but this was by far our most dominant car. I’m so glad I can sleep a little bit easer this week going into Talladega and the [Charlotte] Roval and just enjoy.”

“I knew this team is fully capable of achieving that and even more. I just can’t say thank you enough to [team owners] Gene Haas and Tony Stewart and everybody that lets me drive these race cars.

“It’s been an unbelievable season and we’ve still got six more wins to try and gain and a championship so that’s what we’ll try to do.”

The outcome gives Briscoe the automatic ticket to Round 2 and leaves Cindric leading the standings, 17 points ahead of Gragson. Allgaier is next, 25 points behind Cindric. Sieg and Burton hold the seventh and eighth spots in the standings with Chastain two points behind Burton for the final transfer position for the Round of 8.

Annett is 10th in points, 10 points out of the final position, while Herbst is 14 points back and Brown is 20 points back heading into next Saturday’s Ag-Pro 300 at Talladega Superspeedway (4:30 p.m. ET, NBCSN/NBC Sports App, MRN, SiriusXM NASCAR Radio).

Post-race inspection notes: The Nos. 10 (Chastain), 18 (Herbst), 20 (Burton) and 22 (Cindric) each had one lug nut not safe and secure. The fines assessed to those teams crew chiefs will be on the penalty report that is typically released on the Tuesday following a race weekend.