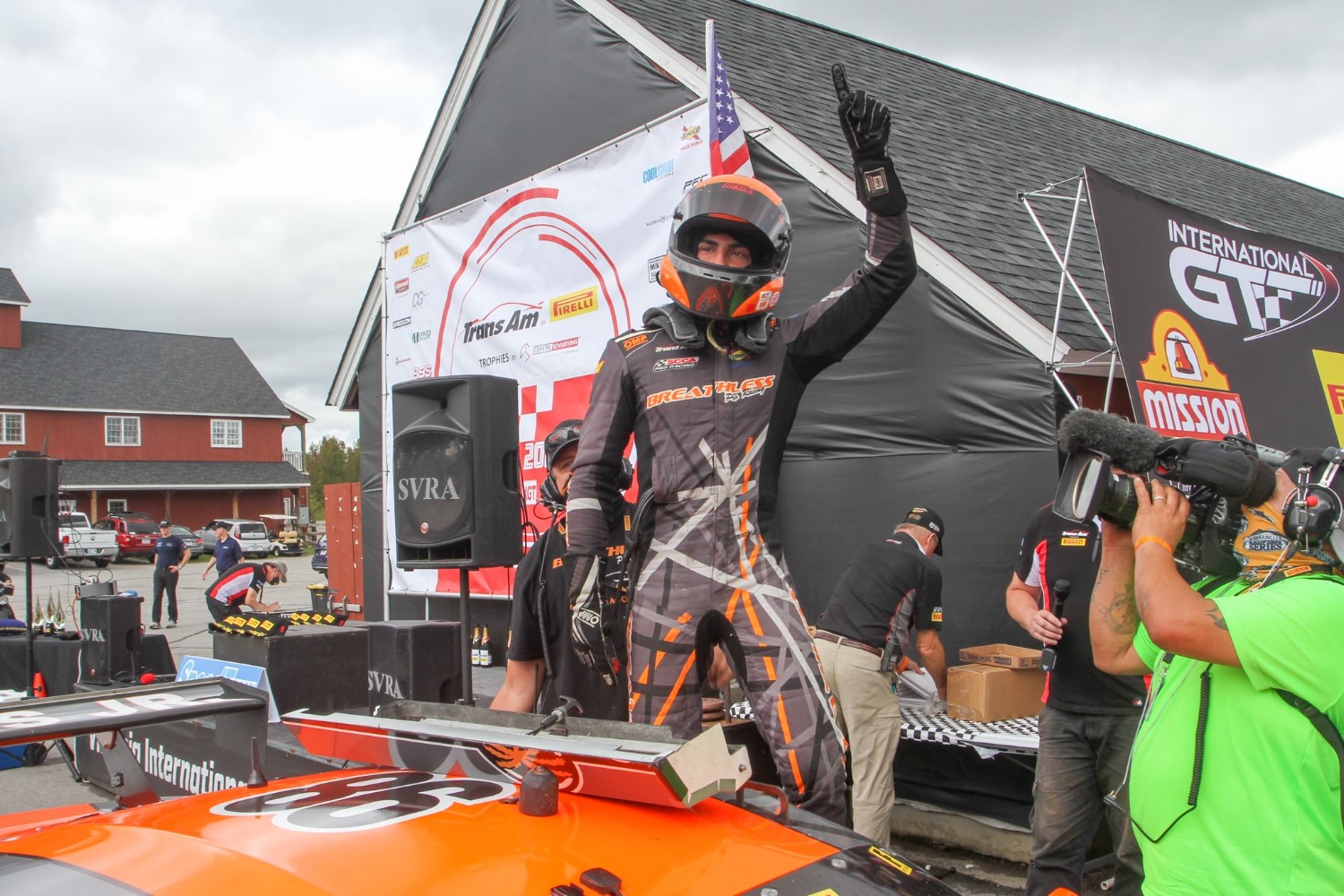 Said started on the pole and led the opening 18 laps in the No. 2 Weaver Racing Dodge Challenger. Francis went to the inside on the front straight on lap 19, edged ahead and maintained the position through Turn 1. Francis led the final 13 laps, including a green/white/checker finish following a late incident, winning by 2.623 seconds.

“Patience was key today from the start of the race,” Francis said. “These cars are wicked fast around here at VIR but it is hard to make a move with the aerodynamics of the Trans Am cars. When I saw an opening, I shot the car in there, hoped it would stick and it did. It is a very big weekend with a doubleheader which means double points. We are trying to maximize what we have here and try to do it again tomorrow.”

It was third victory of the campaign for the six-time champion, and the 45th of his career. Francis also tied Scott Pruett for fourth on the all-time TA list with his 22nd overall victory, and now trails only Paul Gentilozzi (31), Mark Donohue (29) and Tommy Kendall (28).

Said had won in 2002 and 2018, and returned in a brand-new car built by Pancho Weaver. That car will be driven in Sunday’s race by NASCAR veteran Paul Menard.

“It was the first time out in this newly built car,” Said explained. “We have a few things to work on but when we get rid of the bugs, we have a car that is a winner. Ernie (Francis Jr.) did a fantastic job getting by me in traffic. He won today fair and square. We were so dominant for the first half of the race. I made a few mistakes that allowed some room to open up. It was just one of those things. Running this car for the first time, it was a fantastic car.”

Chris Dyson had a back-and-forth day in the No. 20 Plaid Mustang. Passing Frances at the start, he pressured Said during the early laps before losing two positions after being blocked by a backmarker. Dyson fought back, again pressuring Said in the closing laps before finishing third.

“VIR puts on a fantastic show,” Dyson said. “I am so happy we got the Trans Am cars back to this track. The top five were nose to tail the entire time. It is great to have Boris (Said) back and hats off to Ernie (Francis Jr.). When you run in traffic here at VIR it all comes down to timing of when to make that pass. I am excited we have another race here tomorrow and I hope I can get the No. 20 car to the top step tomorrow.”

The race was black-flagged twice. There was a brief stoppage following the opening lap when Jeff Hinkle went off in Turn 6 in the No. 9 Dodge Challenger and damaged the tire barrier. On lap 25, Trans Am West point leader Matthew Butson went into the tires in NASCAR turn, with Tomy Drissi and Humaid Masaood also going off. With time running out, the clock was stopped to allow a green-flag finish.

Amy Ruman finished fourth in the No. 23 McNichols Co. Corvette, followed by Simon Gregg. Tomy Drissi entered the race second in the points and ran with the leaders early in the event in the No. 8 Lucas Oil Corvette. He lost several positions after going off on lap 18, and worked his way back to take sixth.

Ken Thwaits regained the XGT lead on lap 20 and went on to take his third consecutive victory of the season in the No. 5 Franklin Road Apparel Audi R8 GT3 Ultra. Erich Joiner passed Thwaits on lap 14 to take the lead in the No. 10 Championship Coffees and Tool Porsche 911 GT3 R, but went in Turn 10 shortly after Thwaits regained the position.

“A big thank you to my crew,” Thwaits said. “We crashed in qualifying in the rain that required a bit of work. It was so nice being able to race in the dry. We got a good start but the yellows took away any advantage that we had. As usual, I had to fight tooth and nail but it’s great to come away with the win today.”

Lee Saunders led all the way up to the final caution en route to his fourth SGT triumph of 2020 in the No. 84 Landsearch LLC Dodge Viper, but had his work cut out over the final two laps. Adrian Wlostowski made several challenges for the lead before finishing second for the third time this season in the No. 96 F.A.S.T. Auto Ford Mustang, followed by Mark Brummond in the No. 24 Garage Door Dr./Dynamic Auto Tune BMW M4 GT4.

“It feels great to get the win today,” Saunders said. “It was a tough race and we had multiple lead changes, especially on that last lap. Adrian was able to get around me in Oak Tree but I was able to get a draft to get the spot back. Everyone drove very clean and VIR is one of the best tracks in the country.”

With his car damaged in an accident during Thursday testing, Lou Gigliotti raced up to second in his rebuilt No. 28 GT Performance Corvette. His day ended on the 14th lap, when he spun and stopped with a mechanical problem in the Oak Tree turn.

Billy Griffin captured his first GT triumph in the No. 14 Griffin’s Auto Care/Sheehan’s Towing Ford Mustang. Tim Horrell led the first half of the event in quest of his third victory of the season, but parked the No. 45 Breathless Racing Porsche GT4 Clubsport with mechanical issues.

“Today was my first Trans Am win,” Griffin said. “The car was hot, making it tough, but I still had a ton of fun getting to drive around VIR today. Getting the win today gives me a positive mindset going into tomorrow. We have some damage to repair but fixing damage is a lot more fun when I am standing on the top step of the podium. VIR is a fantastic track. Winning here makes it one of my favorites now.” 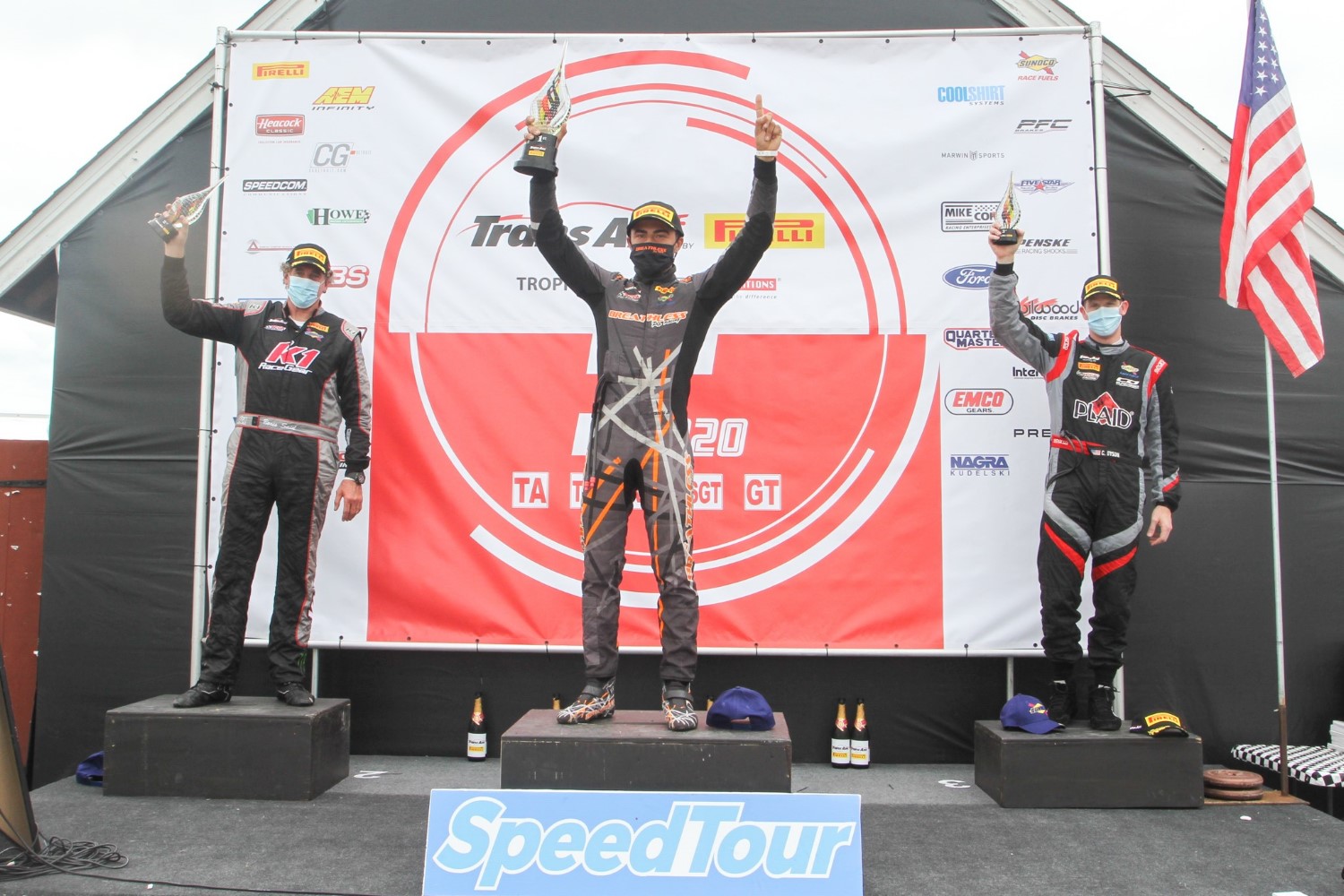 On Sunday, all five Trans Am classes will race in a 100-mile race to complete the unique VIR doubleheader.

Sunday’s combined race will be 100 miles with a 70-minute time limit, set to take the green flag at 11:05 a.m. ET. The race will have a divided grid, with TA, TA2® and XGT/SGT/GT having split starts.