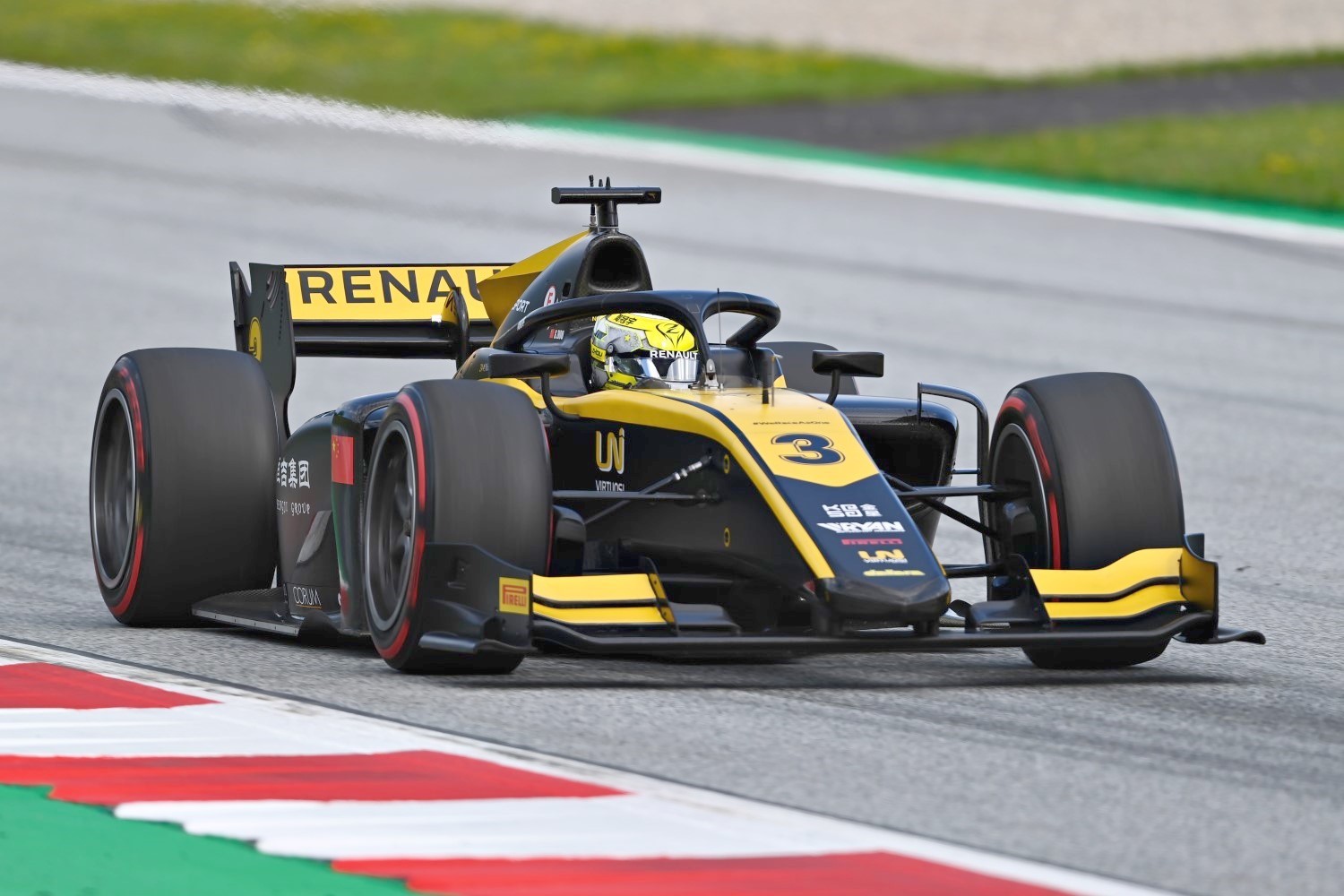 Guanyu Zhou is finally a FIA Formula 2 race winner, but it’s not quite how the UNI-Virtuosi racer would have pictured it, after the Sochi Sprint Race ended early after a collision between Luca Ghiotto and Jack Aitken.

The duo crashed at Turn 3 on Lap 7 and ended up deep in the barriers. Both drivers walked away safely, but the scale of repairs needed meant that the decision was taken not to restart the race. With more than 25% of the 21 lap race left to run, only half points are awarded to the grid, leaving Zhou with a sense of frustration after a dominant start to the race.

Nikita Mazepin secured his fifth podium of the season at his home event, taking second, while Mick Schumacher claimed his 10th rostrum this year to further enhance his position at the top of the Drivers’ Championship.

Zhou was calm and composed when the lights went out, incisively pulling away from Mazepin, who was swallowed up by the field and fell to fifth. Aitken posed an immediate threat to Zhou, but the Campos driver’s attempt around the outside of Turn 1 failed to come off.

As has become a regular feature this season, Schumacher made a storming start. The German thundered down the right from eighth and took the inside line into the first turn, coming out of the second corner in fourth.

There was an early Virtual Safety Car period after a collision between Guilherme Samaia and Jake Hughes. The Campos bounced over the curb at Turn 2, before making contact with Hughes’ left rear and taking them both out of the race.

Mazepin made up the positions he lost after the restart, climbing back up to third, before flinging his Hitech Grand Prix machine past Aitken to retake P2.

Schumacher continued his charge up the field with an extraordinary move on Aitken for third. The PREMA clearly had the pace, but it looked as if he would have to wait until the main straight to overtake. Schumacher had other ideas though, boldly firing down the inside line and into third.

Racing was brought to a halt after a scary moment between Aitken and Ghiotto. The two were battling for fourth position but caught one another at speed and ran off into the wall. Thankfully both drivers walked away safely, but a red flag was needed to recover the cars and mend the barriers.

The marshals got to work clearing away the cars and repairing the barriers, but in the end the damage proved too great to fix in the time available, and the decision was made to abandon the race.

That meant Zhou collected his first win in F2, ahead of Mazepin and Schumacher. Aitken and Ghiotto held on to fourth and fifth due to the count back rule, with the classification being taken from the final lap completed, before the red flag was shown. Yuki Tsunoda claimed sixth, ahead of Callum Ilott, while Dan Ticktum took the final points’ position. A time penalty saw Jehan Daruvala drop to P11.

Schumacher tops the Drivers’ Championship with 191 points, 22 ahead of Ilott. Tsunoda is up to third with 147 points, two ahead of Christian Lundgaard. Robert Shwartzman is fifth on 140 points. In the Teams’ Championship, PREMA are top with 331 points, ahead of UNI-Virtuosi on 288.5. Hitech Grand Prix are third with 244, ahead of ART Grand Prix and Carlin.

“Finally! I have my first victory in the F2 Championship and it definitely felt good to stand on the top step. I promised the Chinese fans at the start of the season that I would win at least once for the country and we have done that today.

“Obviously, it hurts a little bit because we have only got half points. I think from the beginning of the race up until the red flag, we were quite decent. I think that me and Nikita had good pace compared to everyone else and were pulling away.

“It was nice to see Jack and Luca walk away, so that is a good thing. Obviously going into a little break with a victory is definitely nice.”