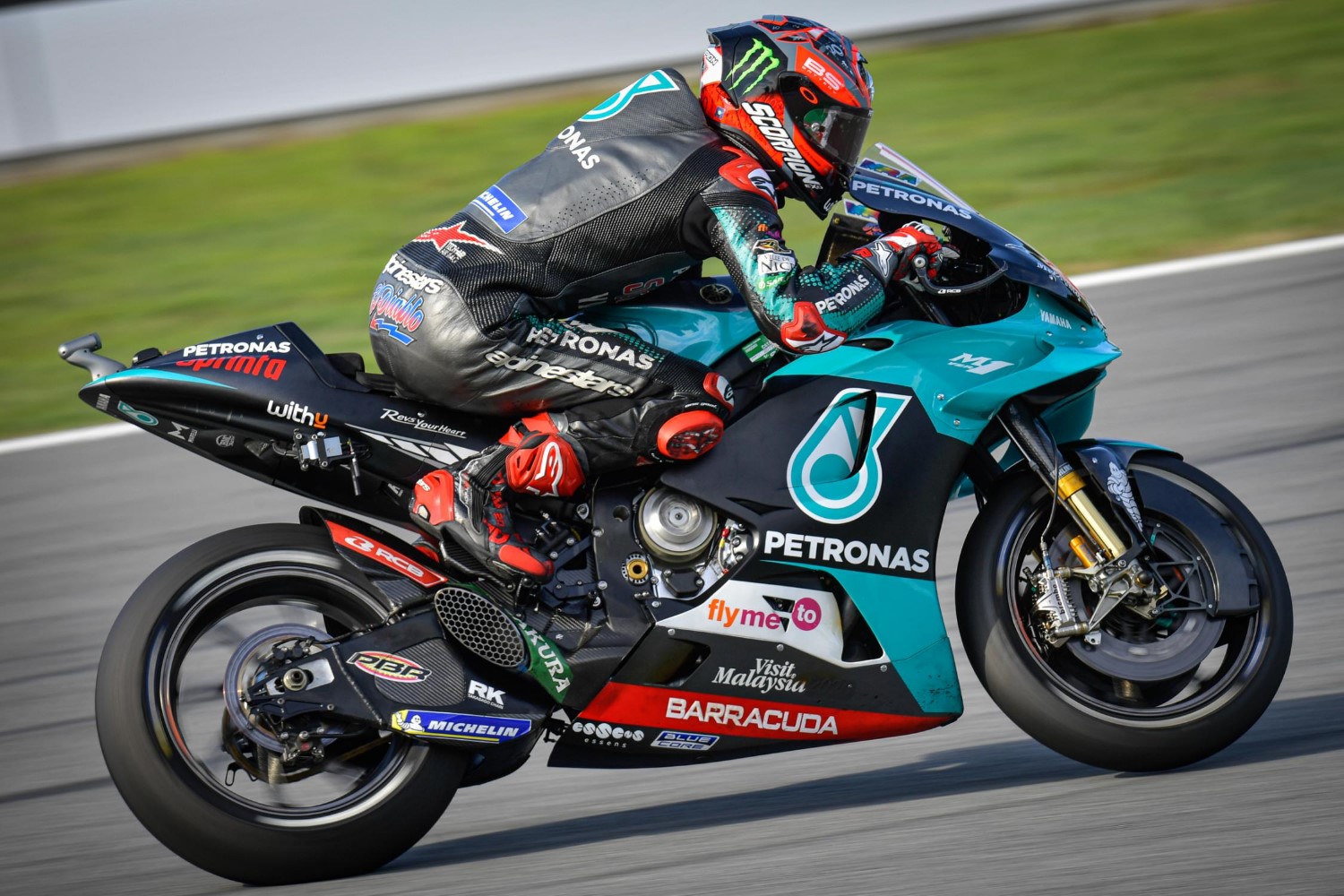 Joan Mir came home third while Jack Miller and Alex Rins rounded out the top-5 in a hard-fought battle behind the leader.

The MotoGP World Championship leader Dovizioso’s title hopes were in tatters after Johann Zarco wiped him out on the opening lap.

Valentino Rossi’s dream of a fairy tale weekend ended with a Turn 2 crash. The Doctor was sitting in second, stalking Fabio Quartararo and looking like a victory contender before his front end folded at Turn 2 and he crashed out.

Franco Morbidelli (Petronas Yamaha SRT) was lightning off the line and grabbed the holeshot with ease as Jack Miller (Pramac Racing) propelled himself into P2 from P4 on the grid, with Valentino Rossi (Monster Energy Yamaha MotoGP) and Quartararo dropping places before huge, Championship defining drama unfolded at Turn 2. Danilo Petrucci (Ducati Team) almost went down just in front of Johann Zarco (Esponsorama Racing) as the riders piled through Turns 1 and 2, Petux clipping Pol Espargaro (Red Bull KTM Factory Racing). Reacting, Zarco then tucked the front of his Ducati after grabbing too much front brake but there was no saving it and on the outside of the Frenchman, Andrea Dovizioso (Ducati Team) was taken out. The Championship leader and Zarco were down and out of the Catalan GP at Turn 2 – both ok, but disastrous for Dovizioso for the title.

Back up front, Rossi had got the better of Quartararo and then The Doctor was up the inside of Miller at Turn 5. Miller was then wide at Turn 10 – narrowly missing Rossi – and that allowed Quartararo through, making it a Yamaha 1-2-3 at the end of the opening lap. Miller was P4 and Mir was holding off teammate Rins for P5 as both Suzukis had made good starts. Maverick Viñales (Monster Energy Yamaha MotoGP) got an awful start and was down in P15 on the first lap from 5th on the grid, work to do for the Spaniard.

Further up the road, the top five then started pulling clear of the chasing pack with Pol Espargaro getting the better of Rins for P6. The gap to Mir was one second on Lap 3 but that had risen to two seconds a couple of laps later, with the top five all equally split apart on the road. Quartararo had Rossi firmly in his sights and the 21-year-old dragged The Doctor down the straight and made a pass stick on the 41-year-old at Turn 1 – a Petronas 1-2 at the front now with Miller sticking with the three Yamahas, Mir dropping back slightly but it was hovering at around one second.

On Lap 8, Quartararo was hounding teammate and race leader Morbidelli, with Rossi waiting in the wings – Miller too. Then, El Diablo snatched the baton off Morbidelli to lead into Turn 1 at the beginning of Lap 9 – was Quartararo now going to try and stretch away? Well, a 1:40.142 certainly suggested that he was trying to – the fastest lap of the race for the number 20, but the Yamaha duo of Morbidelli and Rossi wasn’t letting him streak clear. Morbidelli and Rossi set slightly quicker lap times on Lap 10 than Quartararo as there was nothing between the YZR-M1 trio. Miller was 0.7 seconds off the podium, with Mir 1.2 seconds behind Miller.

With 14 laps to go, the riders were starting to get into tire derogation territory. Everyone was on the soft rear Michelin tires, with 0.8 covering the leading three – Miller now 1.2 off Rossi in P4. After showing awesome race pace in FP4, Pol Espargaro crashed at Turn 1 with 12 laps to go in his backyard, he was battling Petrucci for P7 at that time, with Rins just a little bit further up the road from the lower ends of the top 10 gaggle.

Morbidelli was then nearly down at Turn 1 a lap later. The Italian was out of shape into the braking zone and ran wide, then nearly tucked the front on the dirty asphalt on the outside. Rossi was through on his protégé with Morbidelli slipping to 1.3 seconds behind Rossi and race leader Quartararo, with Miller now struggling to keep Mir behind as the riders headed into the last 10 laps. 0.7s was Quartararo’s gap to the number 46, and that then went up to 0.9s on the 15th lap of 24 – the tension was palpable in Barcelona.

On Lap 16, more drama at Turn 2. On for his second podium of the season and chasing a dream victory and 200th premier class podium, Rossi slid out of contention as he tipped into the left-hander. The Doctor was out of his 350th MotoGP™ race and that left Quartararo with a three-second lead over teammate Morbidelli. After a Turn 10 mistake from Miller, Mir was up to third and smelt blood. That late-race pace for the Suzuki man was coming to the fore again and with seven laps to go, Mir was just half a second off Morbidelli.

Turn 2 then caught out another title contender – Miguel Oliveira (Red Bull KTM Tech3), rider ok. With five laps to go, Rins was now all over the tailpipes of Miller in 4th and 5th, with Mir unable to get within striking distance of Morbidelli for the time being. Barring a disaster, Quartararo was safe in P1 – his lead up to 3.3, and he could control the race without too many issues. Rins pounced on Miller at Turn 10 and was now just 0.8 behind his teammate as the podium battle in Barcelona was hitting boiling point, with the tires now becoming a real factor.

Quartararo’s lead was shaved to 2.8 seconds with four laps left and at the end of Lap 21, the gap was 2.5 – Mir seven tenths quicker than the race leader, the Suzuki man now right with Morbidelli. Both Quartararo and Mir were into the 1:42s with three to go, Mir still in the 1:41s. Onto the penultimate lap, Mir was through and that wasn’t the last of Morbidelli’s worries – Rins was hunting a first podium of 2020. The Suzukis were swarming and Mir was immediately off into the distance, and Rins was then up the inside at Turn 10 to demote the polesitter to P4.

Last lap time. Quartararo’s lead was 1.8 seconds, Mir was flying and Rins was safely by Morbidelli, with Miller and Francesco Bagnaia (Pramac Racing) getting close at Turn 1 as the GP20 duo had Takaaki Nakagami (LCR Honda Idemitsu) for company in the scrap for P5. Halfway round the last lap and Mir was now just 1.4 seconds behind but it was too late for Mir, another lap and the number 36 may have bagged the win but Quartararo rounded the final lap to win for the first time since Jerez. El Diablo was back to winning ways at the perfect time to silence some critics and, more importantly, Quartararo was now the Championship leader again.

Mir was simply sublime once again for his third consecutive podium, the Spaniard climbs to P2 in the title race to sit just eight behind Quartararo heading to Le Mans. Mir is riding the crest of a wave at the minute and is looking formidable. Rins came from P13 on the grid to claim his first rostrum of the season, a magnificent ride from the Spaniard who has endured a tough season with his shoulder injury sustained in Jerez. Mir and Rins give Suzuki their first double podium since Misano 2007 – the Hamamatsu factory are seriously strong heading into the final six races of the season.

Morbidelli slipped to P4 after the Suzuki duos late charge, a disappointing end to the race for the Italian but it’s important points for the Championship – Morbidelli now just seven behind Dovizioso. Miller managed to hold off teammate Bagnaia on the last lap to claim a top five, strong rides for both Pramac Racing men in Barcelona after Ducati looked to be in deep trouble on Friday. Nakagami was just a tenth behind the Ducatis as the Japanese rider keeps up his run of finishing in the top 10 in every race this season. Behind Nakagami in P8 was Petrucci for his fourth top 10 of the year, eighth is his second-best ride of 2020 after finishing P7 at the Austrian GP.