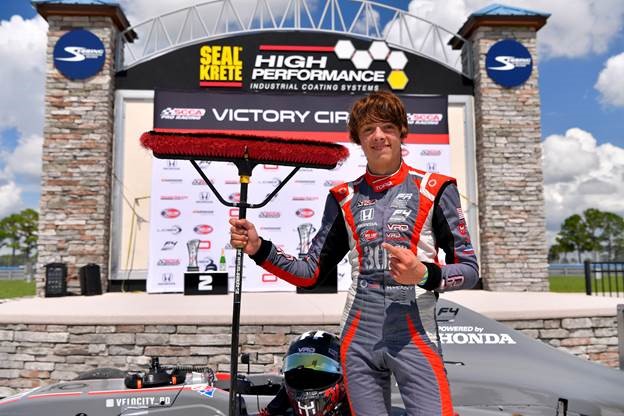 Drives of the season were achieved during the Formula 4 United States Championship Powered by Honda triple-header at Sebring International Raceway September 25-27.

Hunter Yeany swept the weekend, the first hat trick of the season, extending his championship lead by 90 points and earning the Omologato Watch Perfectly Timed Move of the Race for such a precise weekend of competition.  The victory marked Yeany’s fourth consecutive win, his seventh of the season.

“The VRD crew gave me a fast car and the competition was great this weekend,” said Yeany. “We are on a roll with wins and hope to carry that streak on at Homestead. It feels great to have swept the weekend.”

But, Yeany’s ascension to triumph did not come easy, as drivers throughout the field turned up the pressure on the Velocity Racing Development rookie throughout the weekend, setting season records for closest race finishes on the very bumpy Sebring circuit.

The feat earned the No. 32 Art-Draft Authority/ LVP Paint Crosslink Competition driver pole position for the opening round. However, complications surfaced with Blanco’s steering wheel during the parade lap, forcing him to the pits for inspection. He made the green but was required to start from pit lane.

Liberante joins F4 after decades of racing on short tracks, in sports cars and a long career in karting on the newest team in the paddock, RJ Racing. His day would be cut short in the final lap after the Sebring bumps got the best of his car.

Yeany laid down the sixth fastest time in qualifying, but a post-qualifying penalty demoted him to ninth.

On the opening lap, Tavella slid off the track collecting Sarchet in his wake. The incident brought out the red flag to stop the clock for cleanup.

This was the opportunity that Blanco needed to get grouped back up. Rocketing through the field on the restart, by Lap 6, Blanco made up 13 positions, by Lap 9 he banked another three, now sitting in fifth.

Blanco also got a good jump on the restart, making up another three positions. On the final lap, Blanco was glued to Yeany’s gearbox, with Evans in hot pursuit. Trying to use the draft Blanco shot out wide, but it was too late, Yeany took the checkered just .042-seconds ahead of second-place Blanco and only .194-seconds over third place Evans, a new series record podium finish.

From first, to 21st, to second, it was a dramatic drive for the Puerto Rican pilot.

“That was the greatest drive of my career,” said Blanco. “It was gutting to lose pole, but I have to thank Crosslink/Kiwi for getting the car fixed and it back on track before we went green. I really thought I had Hunter (Yeany) at the end, we needed just a few more feet!”

The third-place result was the first podium visit for VRD rookie Evans.

“I am very pleased with the car that VRD gave me today,” said Evans. “It took a lot of work for us to get here. It was a good weekend and the results continue to come with all the hard work that we are putting into the program.”

Jeremy Fairbairn made up four positions to finish fourth, his best placement of the season, with Kohlbecker, Cade McKee, Hayden Bowlsbey, William Myers, Varun Choksey and Vincent Khristov rounding out the top 10.

Bowlsbey was slated to start off pole, his best starting position of his F4 career, however a mechanical issue on the pre-grid followed by an incident on the reconnaissance lap, ended his race before it began.

Evans and Liberante lined up in Row 2 with Yeany and Fairbairn in Row 3.

Blanco controlled the point for the entire race, until a very dramatic last two laps shook up the final podium standings.

With more than a second lead over the rest of the field, Blanco defended the point from Yeany most of the race. On the penultimate circuit, after dominating the entire 30-minute race, Blanco and Yeany entered Turn 1 wheel-to-wheel. Yeany went deep on the outside for a pass. Blanco caught off guard by the move, shot off course, losing position, and the chance not only for victory but also for a podium. Yeany crossed the stripe uncontested, taking the checkered more than 12 seconds ahead of second place.

Another amazing drive of the weekend was from second-place finisher Tavella.

Tavella started last in Race 2 after failing to clock any times in Race 1 following an incident that ended his day prematurely. Working through the night to get his car prepared for the early morning race, the Crosslink/Kiwi driver made grid, lining up in 21st. With only one full course caution that lasted one lap, Tavella drove flat out, chipping away positions and by Lap 7, Tavella was contending for a podium position.

Blanco’s misfortune turned into Tavella’s fortuity as he took second with McKee rounding out the podium.

“We had several good battles going to the front,” said Tavella. “It was an exciting drive and I am really happy to have made podium. Thank you to Crosslink/Kiwi for putting together a fast and reliable car.”

The podium for Race 3 was a repeat of Race 2 with Yeany closing out a perfect weekend in first, Tavella taking second and McKee claiming third, his third podium finish of his rookie season.

“It’s been a good weekend for the Iron Rock Motorsports team,” said McKee. “Sebring is a rough and bumpy track so it can be quite tricky.”

Fairbairn, Blanco and Sarchet finished in the top six. Liberante started 22nd to finish the race in seventh, followed by Murphy, Will Holtz and Rodrigo Gutierrez in the top 10.

The F4 U.S. Championship Powered by Honda drivers have a quick turn around with another triple-header weekend at Homestead-Miami Speedway October 2-4, the first visit Roval configuration for the series. The weekend will be live streamed at FanRacing.Live