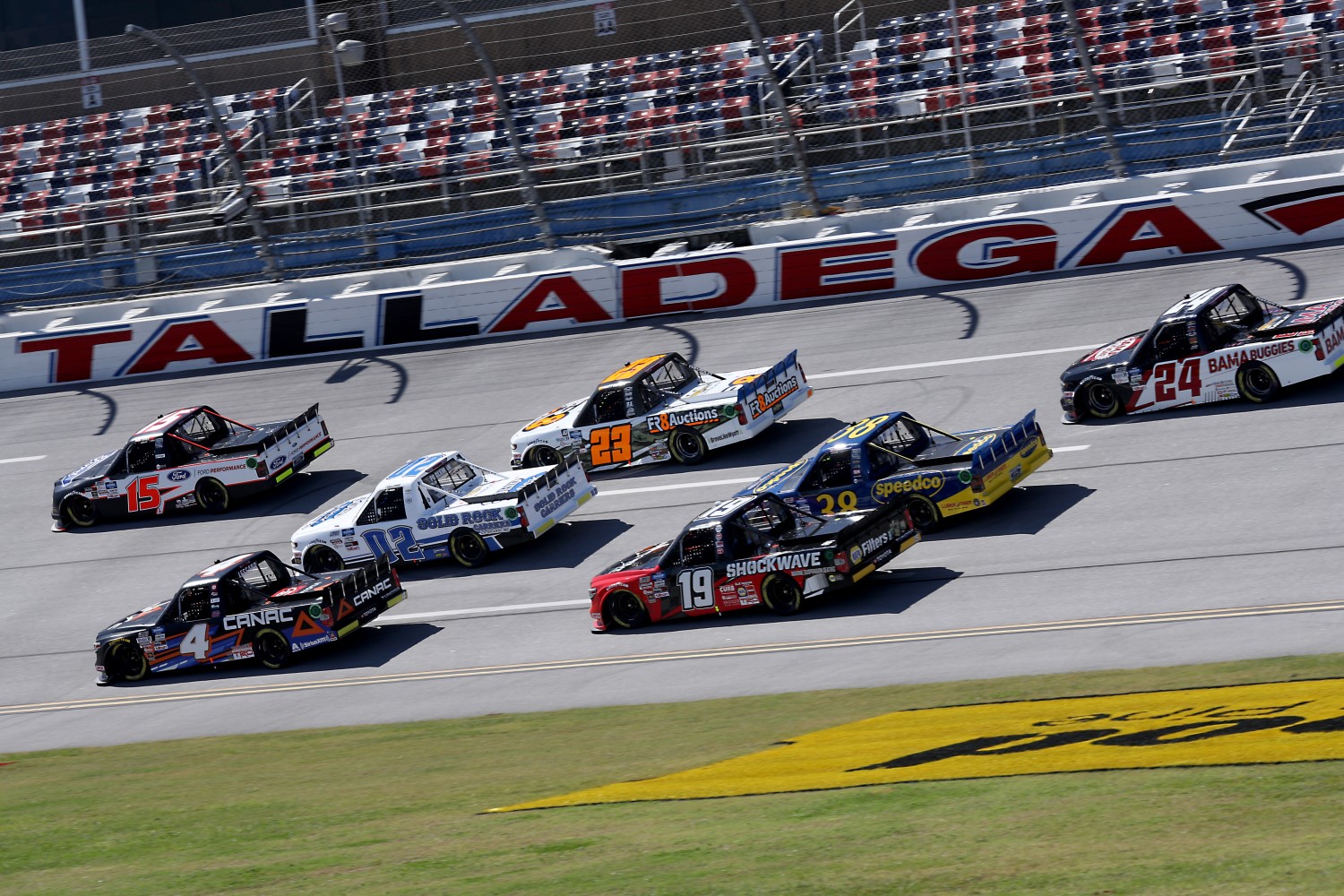 The intensity of playoff elimination racing was on full display Saturday afternoon at Talladega Superspeedway, as the NASCAR Gander RV & Outdoors Truck Series Chevy Silverado 250 at TALLADEGA whittled the playoff field from 10 drivers to eight.  The happiest driver to leave the track, though, was one who was not among the playoff drivers.  Raphael Lessard, a native of Quebec, Canada, was declared the winner after a multi-car wreck on the final lap of the race brought out a caution flag.

It was the first career win for Lessard, driver of the No. 4 Toyota for Kyle Busch Motorsports, as he became the fifth different Gander Truck Series driver to collect his first career victory in 2020.  In addition, he is just the fifth foreign-born driver to earn a win in the Series.

“That was awesome,” said an elated Lessard. “This is amazing, I can’t believe it. It’s my second superspeedway race and my first truck series win here is amazing. I don’t know who was behind me, but he gave me a heck of a push and I can’t thank him enough because he’s part of that win too. He pushed me as hard as he could and I was just holding on for the ride. Then the caution came out at the right time. I’m so happy. This was my first time doing a burnout from a race win and I loved it. Hopefully we can do it some more.”

Seven of the eight drivers who began the day above the cut line managed to advance to the Round of 8 – Sheldon Creed, Brett Moffitt, Zane Smith, Grant Enfinger, Tyler Ankrum, Matt Crafton and Austin Hill.  Rookie Christian Eckes, who began the race in 8th spot, was involved in the last-lap wreck and was eliminated from playoff contention.  Ben Rhodes started the race 9th in the playoff standings and secured a 4th-place finish in the race to earn his way into the Round of 8, which commences in two weeks with the running of the Clean Harbors 200 at Kansas Speedway on Saturday, October 17 at 4:00 pm ET (FOX).

There were tense moments early in the race for several of the playoff contenders.  Grant Enfinger, who began the day fourth in the playoff standings, 31 points above the cut line, experienced a flat left rear tire, putting him two laps down early on.  He secured a 14th-place finish and will head into the Round of 8.

Shortly afterwards, on lap 12, a multi-car wreck in Turn 3 collected 11 cars, including Zane Smith, who entered the day third in the playoff standings, 39 points above the cut line.  Smith watched the remainder of the race, hoping that lady luck would be on his side and that he could find his way into the Round of 8.  Despite his 33rd-place finish, Smith was able to survive and make the Round of 8.

“They just got bunched up in front of me and my teammate (Sheldon Creed) got all out of shape,” Smith said shortly following the incident when he still was not certain if he would advance. “I was just an innocent bystander.”

Matt Crafton, driver of the No. 88 Ford for ThorSport Racing, started the day sixth in the playoff standings and held on for an 8th-place showing, just enough to propel him into the Round of 8.

“We threw some haymakers right there, did some crazy superspeedway blocking and did what we had to do,” said Crafton, the defending champion in the Gander Truck Series.  “It wasn’t pretty.  It seemed like every time I made a move they just never seemed to work.  All in all we move on and I love all of the next four race tracks.”

Gilliland, who was 10th in the playoff standings at the beginning of the day saw his championship hopes erode prematurely when he developed engine trouble with 47 laps remaining in the race and finished 28th.

There were 14 lead changes among 10 drivers, including a race-high 19 by rookie Derek Kraus and 16 by Jennifer Jo Cobb.  There were five cautions for 24 laps.

How does it feel to get your first Truck Series win?

“That was awesome. First of all, I want to thank everyone back home, my team at Kyle Busch Motorsports. Canac came on board with us this year. Also, Mobil1, Toyota, TRD – this is amazing, I can’t believe it. It’s my second superspeedway race and my first truck series win here is amazing.”

What was the final lap like and did you think you had won the race?

“I don’t know who was behind me, but he gave me a heck of a push and I can’t thank him enough because he’s part of that win too. He pushed me as hard as he could and I was just holding on for the ride. Then the caution came out at the right time. I’m so happy. This was my first time doing a burnout from a race win and I loved it. Hopefully we can do it some more.”

“It’s been pretty crazy. I moved here to Mooresville, North Carolina in January and it’s a crazy year to be my first time moving from home. My family is all in Quebec, Canada. It’s been crazy and I haven’t seen them in a while. I want to say hi to everybody back in Quebec and all my family. I needed that. We had a tough season so this one feels really good.”

How were you able to get into position to win the race?

“All race long, my crew chief Mike Hillman Jr. gave me the best strategy ever. I was kind of getting tired riding out back. My teammate and I worked really well – Christian Eckes and Chandler Smith. I was just getting tired of it and I guess I listened to my crew chief, my team and I think we won it from listening to what my crew chief was telling me. At the end, we were in position to win it and all I was doing was trying to hold it straight and the guy behind me pushed me as much as he could.”

Did you feel you were ahead of Trevor Bayne when the caution came out?

“I thought I was close, but I was just focused in case we had another restart. In my head, it wasn’t done yet. We didn’t get to the start-finish line yet so I thought it was going to be a green-white-checkered, but it didn’t happen and we ended up winning.”

What would you say to other kids on looking up to you for this victory?

“I want to go celebrate now with my team, but I’m just a kid from Quebec that started racing growing up. Growing up, I was watching my Dad just race for fun and now I’m here. Just always keep believing and always keep pushing hard.”