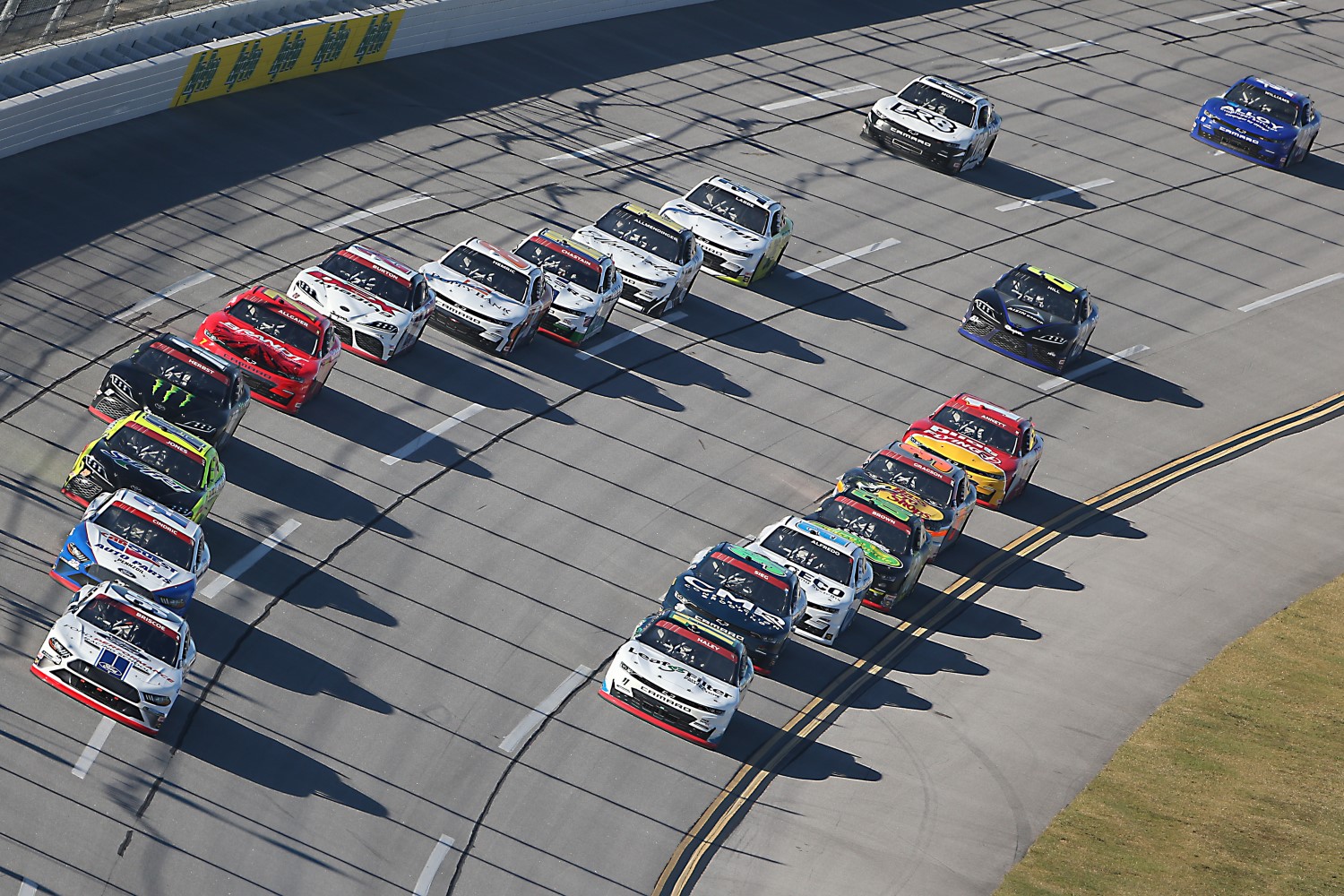 With “Darkhorse” written above his door, Justin Haley drove his No. 11 Kaulig Racing Chevrolet through the field in some chaotic final laps of the NASCAR Xfinity Series Playoff race at NASCAR’s Most Competitive track on Saturday, to capture the checkered flag in the Ag-Pro 300 At TALLADEGA. Haley only led two of 113 laps, but they were the most important laps as he notched his third win of the Xfinity Series season.

“We were so far back with 10 to go,” said Haley. “Matt Kaulig (team owner), we love you! Three (superspeedway wins) in a row. I guess I told you earlier I wasn’t saying it’s luck but three in a row is pretty hard to do on luck. Just super thankful. This is such a blessing.”

The celebration was Haley’s third consecutive Xfinity win at a “super” superspeedway (Talladega Superspeedway & Daytona International Speedway) as he took the checkered flag in the Unhinged 300 at Talladega on June 20 and Wawa 250 Powered by Coca-Cola on Aug. 28. The first two victories were part of the Xfinity Series regular season. Haley swept the season at Talladega, which hosted two Xfinity races in the same year for the first time in its history. In his career at Talladega, Haley has two wins and three top-10 finishes in four races. It was also Haley’s 18th top-10 finish of 2020.

“The ‘Darkhouse’ nickname has been with me since the truck days when I was at GMS and went all the way to the final four and had a chance at the championship,” continued Haley. “A lot of people doubted my existence even in the playoffs that year and I’ve just always felt like an underdog…I’m here to race and I’m here to win. I could really care less about anything else. I’ve just always been overlooked. That’s just how it is.”

Michael Annett finished second in his JR Motorsports No. 1 Chevrolet after “the big one” occurred at the start-finish line as the white-flag flew for the final lap. Ryan Sieg, driver of the No. 39 RSS Racing Chevrolet, finished third followed by Noah Gragson in the No. 9 JR Motorsports Chevrolet and Brandon Jones in the No. 19 Joe Gibbs Racing Toyota.

The Ag-Pro 300 At TALLADEGA was the second of seven races in the Xfinity Series playoffs, the middle event of the opening three-race Round of 12. Chase Briscoe, driver of the No. 98 Stewart-Haas Racing Ford, had already clinched a spot in the Round of 8 with last weekend’s victory at Las Vegas Motor Speedway.

Briscoe was dominant throughout, leading a race-high 73 laps, but conflict with Gragson shuffled him out of contention in the final laps and leaving him with a 20th-place finish.

“At the end you are doing everything you can to protect the runs and (Gragson) is doing everything he can to make moves,” said Briscoe. “It is just part of racing here. It was exciting, at least on my end.”

Briscoe won the first two stages of the race with his fellow Ford driver, Austin Cindric in the No. 22 for Team Penske, close behind in second. In the third stage on Lap 76, Austin Cindric and Austin Hill got knocked out of line as several teams were getting ready to head down to pit road and each slammed into the inside retaining wall.

“I had no chance of even making it to pit road,” said Cindric. “Really unfortunate. I really wanted to have a great run. Ran up front all day, unfortunately, circumstances kept me and (Briscoe) from being up front there. Really sucks, but it’s part of racing.”

For the first time in history, the Xfinity Series, which has been a staple during the track’s springtime weekend since 1992, competed twice in the same season at NASCAR’s Most Competitive venue. The addition of the Ag-Pro 300 At TALLADEGA came as part of a realignment from the Mid-Ohio Sports Car Course event, originally set for May 30. The Ag-Pro At TALLADEGA continues a strong partnership between the 2.66-mile track and Ag-Pro Companies, which is also the Official Tractor Dealer of Talladega Superspeedway.

The Ag-Pro 300 At TALLADEGA was a part of a double-dose of action on Saturday, with the Chevy Silverado 250 NASCAR Gander RV & Outdoors Truck Series held earlier in the day. Raphael Lessard won the event while Christian Eckes was eliminated from Playoff contention. The Chevy Silverado 300 was the second race in the Round of 12 for the Xfinity Series.