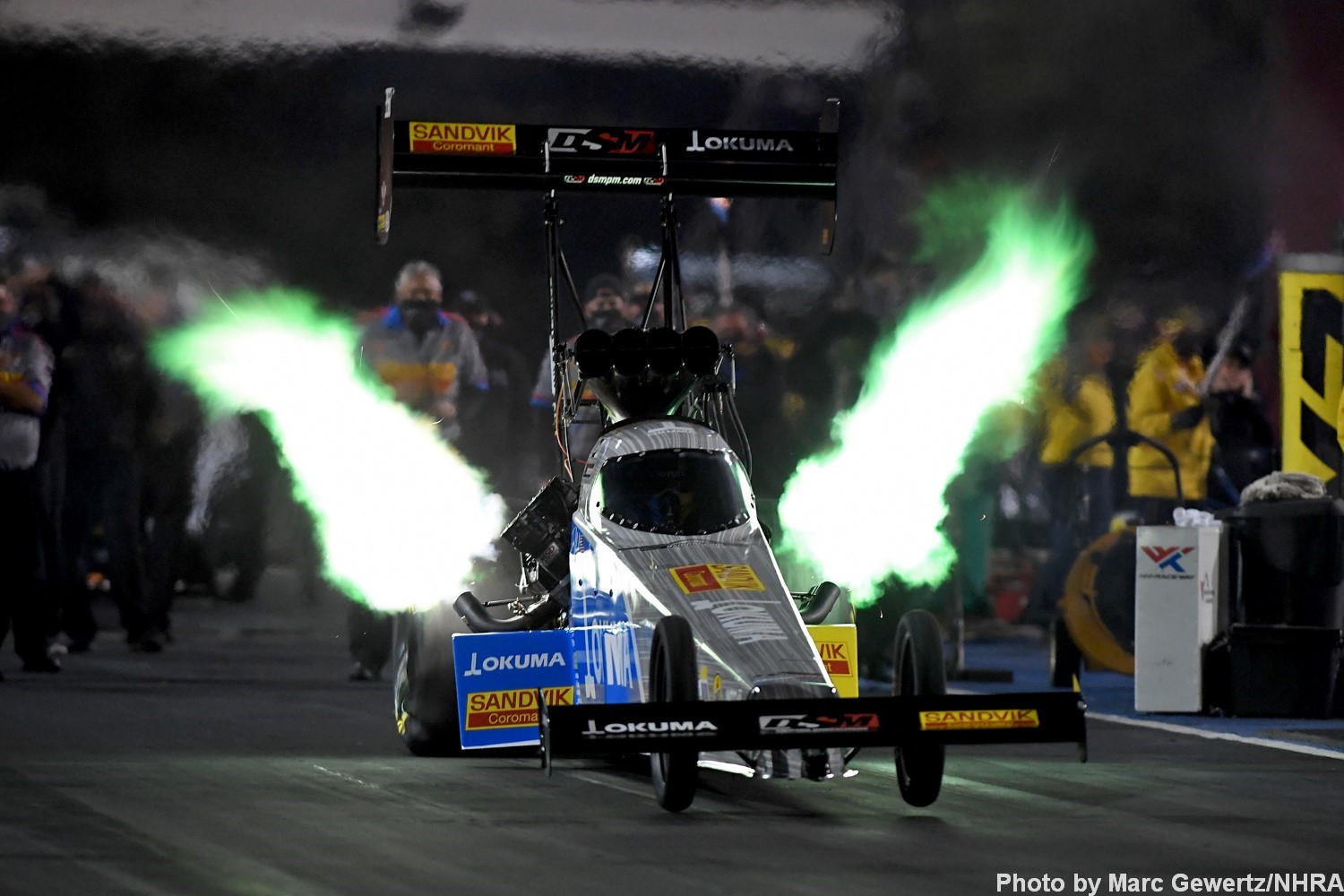 After a swelteringly hot Amalie NHRA Gatornationals last weekend, the cool temperatures we all longed for greeted us in St. Louis. But the drop in mercury also brought intermittent rain during Saturday’s qualifying for the 2020 Mopar Express Lane NHRA Midwest Nationals presented by Pennzoil.

Intermittent rain throughout the day delayed on track activities at World Wide Technology Raceway for seven hours and limited Funny Car and Top Fuel classes to just one qualifying session in cool 58-degree Fahrenheit temperatures on Saturday night under the lights.

Challenging track conditions and the resulting shake-up to the nitro elimination ladders heading into race day will almost certainly further enliven battles for world championship titles for the Mopar Dodge SRT entries in both Funny Car and Top Fuel.

Five drivers; Kebin Kinsley, Todd Paton, Luigi Novelli, Kyle Wurtzel, and Chris Karamesines were able to make passes before storm clouds rolled in from the West to delay qualifying action for three more hours. When the track was dried, Top Fuel’s Q1 restarted at 7:15 p.m. with Tony Schumacher and Pat Dakin. Schumacher immediately quelled any concerns about the condition of the track with a 332.92-mph run—a new Top Fuel speed record for World Wide Technology Raceway.

Following Saturday’s only round of nitro qualifying runs and the calculated qualifying order for Pro Stock and Pro Stock Motorcycle due to weather; Tony Schumacher, Paul Lee, Jason Line, and Matt Smith have qualified in the top spot in their respective categories.

At 4 p.m. local time Tony Schumacher’s car (above) was fired and ready to do his burnout when the word from NHRA’s Safety Safari came to shut the cars down. Three hours later, Schumacher’s Mike-Green-tuned dragster showed everyone they’d need to bring out their aggressive tune-ups. He knew that nitro drivers would only have one shot at qualifying, so he decided to go long. Schumacher stormed his way into the top qualifying spot with a 3.680-second run at 332.92 mph—for a new track speed record.

“I was just on a dynamite run,” Schumacher said. “I honestly didn’t think it was going to stick, but for all the people who jumped in at the last minute to help me out and get me back out here, I appreciate it. (Crew chief) Mike Green and I have been doing this a long time together. We work well together and understand how each other works, and these guys are having a great time. I’m real happy to be here. I’ve got faith in the guys and that makes a big difference. It’s hard to go down a track that’s 64 degrees. It takes a great crew chief, a great team and some luck. We had it all right there, so it was perfect for us.”

Fans didn’t know what the rest of the night would hold, but it seemed the racers did. When Antron Brown and Terry McMillen lined up for what proved to be the best side-by-side pairing in Top Fuel we saw clean runs that saw Terry McMillen qualified No. 2 with a 3.715 at 319.45 mph and Antron Brown run an equally clean, but slightly slower 3.720 at 326.95 to qualified No. 3. It should be noted that for nearly three hours today, “The Greek” Chris Karamesines was statistically the No.1 qualifier in Top Fuel. A position that he’s never held in more than 258 starts in NHRA drag races dating back to 1964.

Funny Car qualifying saw just two of 16 entries make clean runs in cool conditions, with all four Don Schumacher Racing (DSR) Dodge Charger SRT Hellcat pilots finding it difficult to get the traction needed to make it down the lane.

When the Funny Car pairs came to the line it was obvious drivers and crew chiefs where going to battle overpowering the track, and relying on their drivers to manage the mighty torque of their nitro methane burning Hemi engines. Paul Lee’s Global Electronic Dodge made the cleanest pass with a 3.913-second run at 326.95 mph. Alexis DeJoria also bears watching after she made the third-best pass with a 3.929 at 288.21mph in her RoKit/ABK Beer Toyota. DeJoria opened the season with a semifinal finish but has recently dropped to eighth place in the tough Funny Car title chase. DeJoria will be paired with Cruz Pedregon also made a reasonably clean run with a 3.949-second pass at 329.58 mph. Pedregon was next to Lee when he qualify third.

When paired off against Blake Alexander, Jim Campbell broke traction and failed to qualify, while Alexander was able to get down the track and lock in his slot on race day. The dominant DSR Funny Cars all suffered with traction issues, with Jack Beckman doing the best of the group with a 4.7-second run at 185.03.

For the first time since Dallas 2000, the Pro Stock qualifying order will be dictated by the current Mello Yello Drag Racing Series points standings. The de facto order on race day of the Mopar Express Lane NHRA Midwest Nationals presented by Pennzoil will be Jason Line.

For the first time since Dallas 2000, the Pro Stock Motorcycle qualifying order will be dictated by the current Mello Yello Drag Racing Series points standings. The de facto order on race day of the Mopar Express Lane NHRA Midwest Nationals presented by Pennzoil will be Matt Smith.

Prior to the end of Saturday’s qualifying rounds, NHRA officials announced that the start time for Sunday’s final eliminations would remain 11 a.m. CDT.