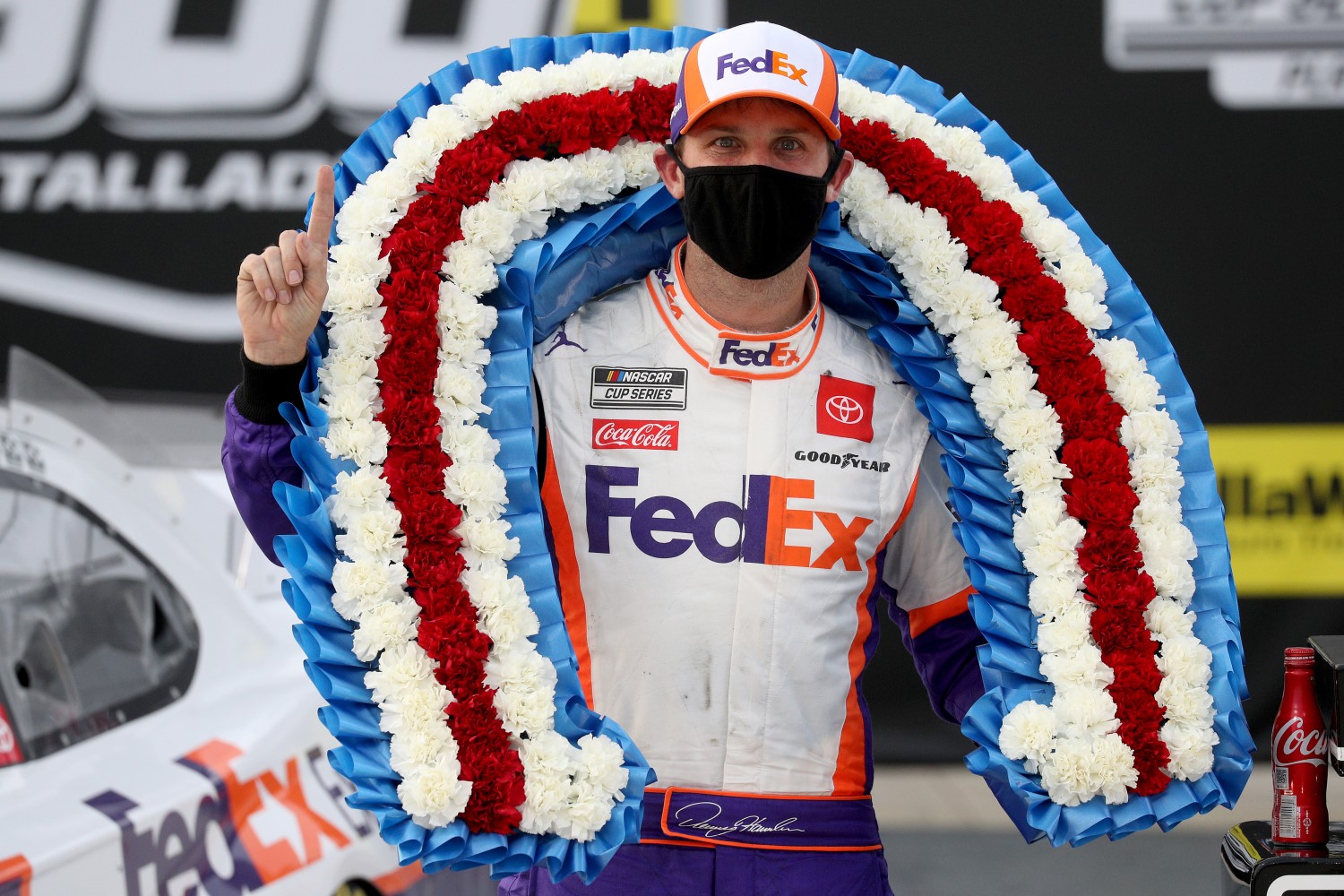 If you like big wrecks, the 13 in the NASCAR YellaWood 500 at Talladega did not disappoint. In fact there were so many wrecks the race ran 12 laps over the planned 188 – so far over the TV broadcast had to switch from NBC to NBCSN to finish the race.

They started wrecking on lap 1 and didn’t stop wrecking until the very end. Through all the smoke and wreckage, and several green-white-checkers, #11 Denny Hamlin emerged as the winner in a photo-finish by 0.023s over the #21 Wood Brothers Ford of DiBenedetto.

Later the #9 of Chase Elliott and the #21 of Matt DiBenedetto were moved to the back of the lead lap for forcing the #11 of Hamlin below the yellow line.  After further review the #9 was deemed to be innocent and his finishing position restored.

It was Hamlin’s 44th career win, which ties legend Bill Elliott for wins. Hamlin won his seventh race of the season.

In one of the wildest races in Talladega Superspeedway’s history, Denny Hamlin, one of the few playoff drivers that survived the afternoon mayhem, emerged victorious – coming from fifth through turn four on the last lap – to take home the checkered flag in triple overtime to win Sunday’s YellaWood 500.

“We just played the strategy and the numbers game to run in the back until we were lock in,” said Hamlin, who said afterwards while catching his breath at the start/finish line. “Just, things worked out. We finally got one back. This one was unexpected to say the least, but proud of this whole FedEx team, Toyota and everyone at JGR for bringing great race cars.”

The win marked Hamlin’s seventh on the season and the 44th of his Cup Series career, tying him for 18th all time with his childhood hero Bill Elliott. Following a record 13 cautions, the end of the race saw numerous wrecks requiring multiple overtime attempts at a green-white-checkered. Winning in triple overtime, Hamlin edged Matt DiBenedetto and Joe Gibbs Racing teammate Erik Jones. DiBenedetto was later penalized for forcing William Byron below the yellow line on the final lap, relegating him to the back of the field and a 21st-place finish.

“A lot of stuff happened (on the last lap) for sure,” added Hamlin. “I don’t know if the 21 (DiBenedetto) was running out of gas, but they obviously got shuffled there. They were crashing up top. I think the 20 (Jones) hit the wall and then started coming back down, which forced, I think, me and the 24 (Byron) down to the apron. I was just able to overcome. This is one of those that you don’t plan on winning, but we got away with one today.”

Elliott initially was penalized for passing below the yellow line on the final lap, but NASCAR reviewed the video and rescinded the penalty after determining Elliott was forced below the boundary. NASCAR also reviewed Hamlin’s trip to the apron in the final corner but determined that he had had been forced to go there to avoid a wreck.

“It’s just a crazy finish,” said DiBenedetto, who was trying to give the Wood Brothers Racing Team its 100th victory. “I haven’t been able to really process it.  I just really want to get this thing in Victory Lane. I feel like this is the same story a lot of times, just heartbreak.  I tried to block all I could. This is tough.”

Sunday’s playoff race saw plenty of heart-pounding action, including 58 lead changes amongst 18 different drivers. Major wrecks marked the end of all three stages, each of which cutting the day short for multiple playoff drivers competing for valuable points in their push for a Cup Series championship.

A wreck in the final lap of Stage 1 ended the day for Aric Almirola, driver of the No. 10 for Stewart-Haas Racing, while also involving fellow playoff drivers Kyle Bush and Alex Bowman. Busch was later involved in a wreck late in Stage 2 that ended the day for his brother Kurt Busch as well as Clint Bowyer. And on the penultimate lap, just short of the white flag in the final stage ahead of the overtime attempts, another multicar wreck finally ended the day for Kyle Busch while also taking out fellow playoff competitors Kevin Harvick, Joey Logano and Martin Truex Jr.

“It was textbook, as perfect as Talladega could go for us,” said Truex Jr. following the late-race wreck. “Just nowhere to go obviously in that last wreck. Proud of the effort, strong car. We wanted to get stage points and we got a stage win. That was a nice little bonus. Had fun up until the crash. Just wrong place, wrong time. Wish we could have ran until the end. We’ll go to the ROVAL and have some fun next week.”

With just one race remaining in the Round of 12, ten drivers are competing for the final six spots in the Round of 8. Hamlin and Kurt Busch are locks in the Round of 8 following their victories, with Harvick (+68), Chase Elliott (+44), Brad Keselowski (+41), Truex Jr. (+32), Bowman (+22) and Logano (+21) sitting third through eighth. Defending Cup Series Champion Kyle Busch as well as Austin Dillon find themselves on the wrong side of the bubble 21 points behind Logano for the cutoff spot, followed by Bowyer (-38) and Almirola (-48).

Next week’s finale in the Round of 12 will be The ROVAL at the Charlotte Motor Speedway Road Course on Sunday, October 11 at 2:30 p.m. ET on NBC.

How did you pull this win off today?

“Just a lot of attrition. We just played the strategy and the numbers game to run in the back until we were locked in. Just things worked out. We finally got one back. This one was unexpected to say the least, but proud of this whole FedEx team, Toyota and everyone at JGR for bringing great race cars. Today we’re obviously thinking about JJ Damato (JGR executive) and his two kids. Really excited about this win. This was unexpected for sure.”

Were you aware that you went below the yellow line and were you forced there?

“They were crashing in front of us. Obviously, I got forced down there just like the 21 (Matt DiBenedetto) and others did. There were a bunch of us that all crashed down there.”

What does it mean to tie total number of wins with Bill Elliott?

“So much. He (Bill Elliott) was my childhood hero growing up. That’s why I’ve always been No. 11 to be honest is because of the days when he was running for Junior Johnson. Just an amazing day.”

What happened in those final laps to get you to victory lane?

“A lot of stuff happened for sure. I don’t know if the 21 (Matt DiBenedetto) was running out of gas, but they obviously got shuffled there. They were crashing up top. I think the 20 (Erik Jones) hit the wall and then started coming back down, which forced I think me and the 24 (William Byron) down to the apron. Just was able to overcome. This is one of those that you don’t plan on winning, but we got away with one today.”

Did you run in the back early in the race by design?

What makes this win special for Joe Gibbs Racing?

“JJ Damato (JGR executive) was a great friend of ours at JGR. Just really thinking of his two kids right now. It’s really, really sad what happened to expectantly lose him. We’re all thinking about him.”

“It was good. Obviously, wish we could have won it there at the end. We had to throw a big block and got in the wall, but still came back and finished second there. Good day. The car was strong. The Sport Clips Camry had good speed and we led a lot of laps. Just didn’t totally play out at the end. You can’t ask for a lot more. We were there and coming to the line with a shot to win.”