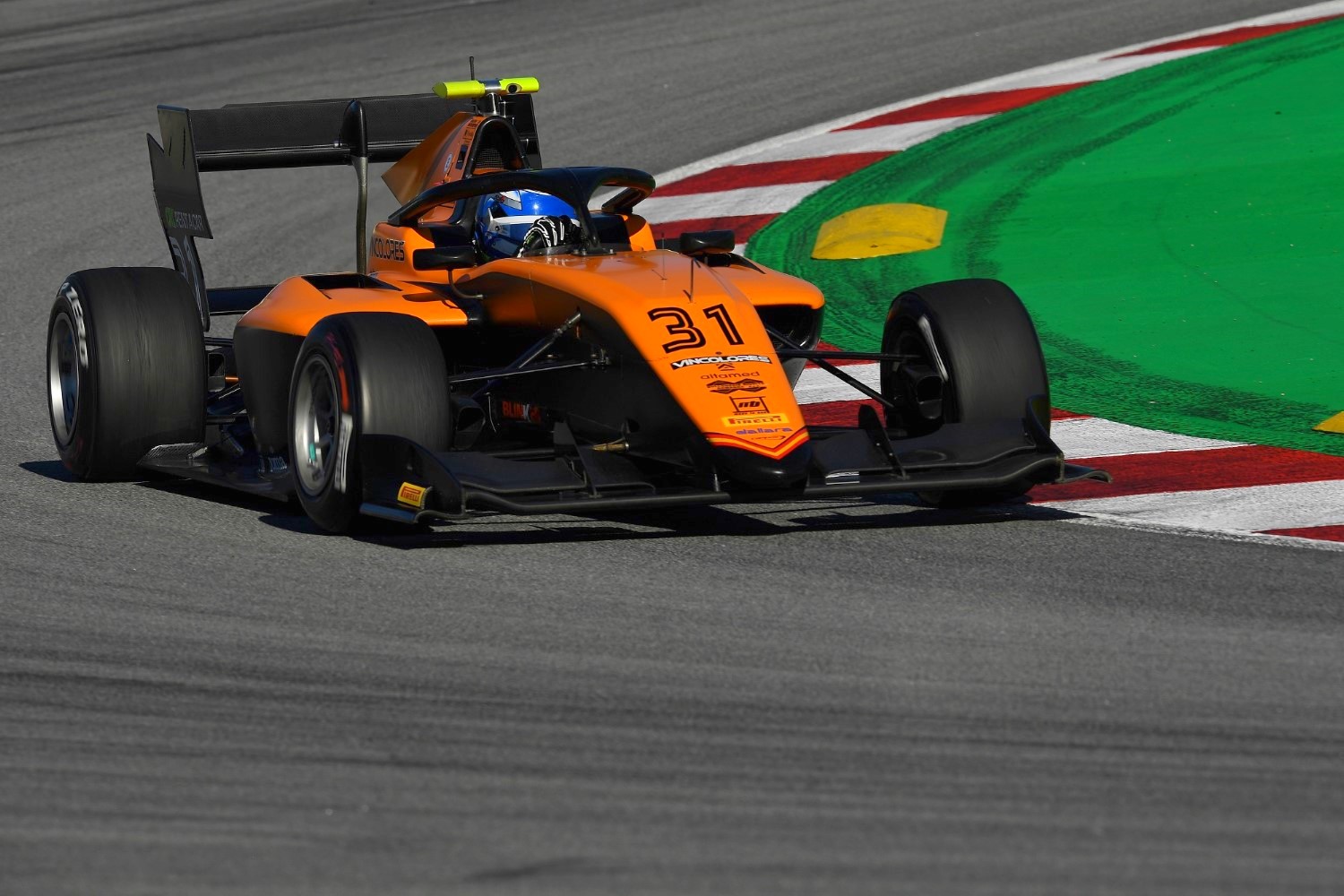 The fastest lap of the first day of post-season testing in Barcelona was set by Italian racer Matteo Nannini (above), who demonstrated the lessons he has learned from his debut season in FIA Formula 3, to take first place overall.

The top ten was heavily dominated by returning drivers, though there was space for a debutant, as Victor Martins clinched fifth overall on his maiden outing for ART Grand Prix.

Jack Doohan dominated the second half of the day for Trident, ahead of Williams and Dennis Hauger, in an afternoon session which was heavily focused on race-simulations and data gathering.

The field were treated to a dry and sunny morning in Barcelona, as MP Motorsport’s trio of rookies set the first lot of fast laps around the circuit, 45 minutes into the opening session. Franco Colap into was the quickest of the three, clocking 1:34.841. The 2019 Spanish F4 champion finished the morning in 12th.

There was a brief red flag as Rafael Villagomez lost control of his Trident and spun on track. The Mexican did manage to get back out there, but ended up 29th in the order.

PREMA enjoyed a stint in first midway through the morning, before switching to longer runs. Hauger and David Schumacher took turns in P1, before slipping down to fourth and tenth.

Williams was enjoying the familiarity of the Jenzer Motorsport cockpit and twice topped the morning session, on the one-hour and two-hour markers. The Australian’s quickest time of 1:32.500 was good enough for third.

Nannini enjoyed a productive first day with Campos Racing, finding his rhythm in the final hour of the opening session to take first place ahead of Hughes, by 0.257s.

Hughes had been drafted back into the F3 car by HWA to assist with development on Day 1 and put in an impressive 62 laps overall, but couldn’t resist a few flyers, topping the times for a period. In the end, his tour of 1:32.427 was good enough for second.

There was also a spot in the top ten for debutant Martins, who took fifth with ART Grand Prix, while the returning quartet of Enzo Fittipaldi, Roman Stanek, Doohan and Clement Novalak occupied sixth to ninth.

Williams initially returned to the top of the table at the start of the afternoon stint, but was overtaken by Igor Fraga ahead of the hour mark, testing for the Hitech Grand Prix.

Very little changed until Jack Doohan set in motion a final lot of flying laps for the field, with just over half an hour to go. Debuting for Trident, the Australian lapped quickest to nab first from Fraga. He briefly lost P1 to Hauger, but forced himself back in front on his next tour of the circuit.

PREMA had attempted to flex their muscles in the closing half hour as their trio of drivers fleetingly went one-two-three in the order, with Hauger followed by Arthur Leclerc and Schumacher.

The 2020 Teams’ Champions couldn’t sustain it though, as Doohan reclaimed first and Williams stole second. While, Stanek separated Hauger from his teammates, diving into fourth.

Despite being just 15-years-old, Jak Crawford was impressing on his maiden F3 appearance outing with Hitech. The American sat sixth for a good while, before dropping down the order in the final minutes and finishing a respectable 15th.

Frenchman Martins continued his good work with ART, taking fifth in the afternoon stint. Fraga settled for sixth in the end, ahead of Leclerc. Ben Barnicoat was back in the Carlin garage and assisting with the team’s development, but still found time to set a lap good enough for eighth. Pierre-Louis Chovet and Caldwell closed out the top ten.

Action will resume for the second and final day of post-season testing in Barcelona on Tuesday at 9am (local time).