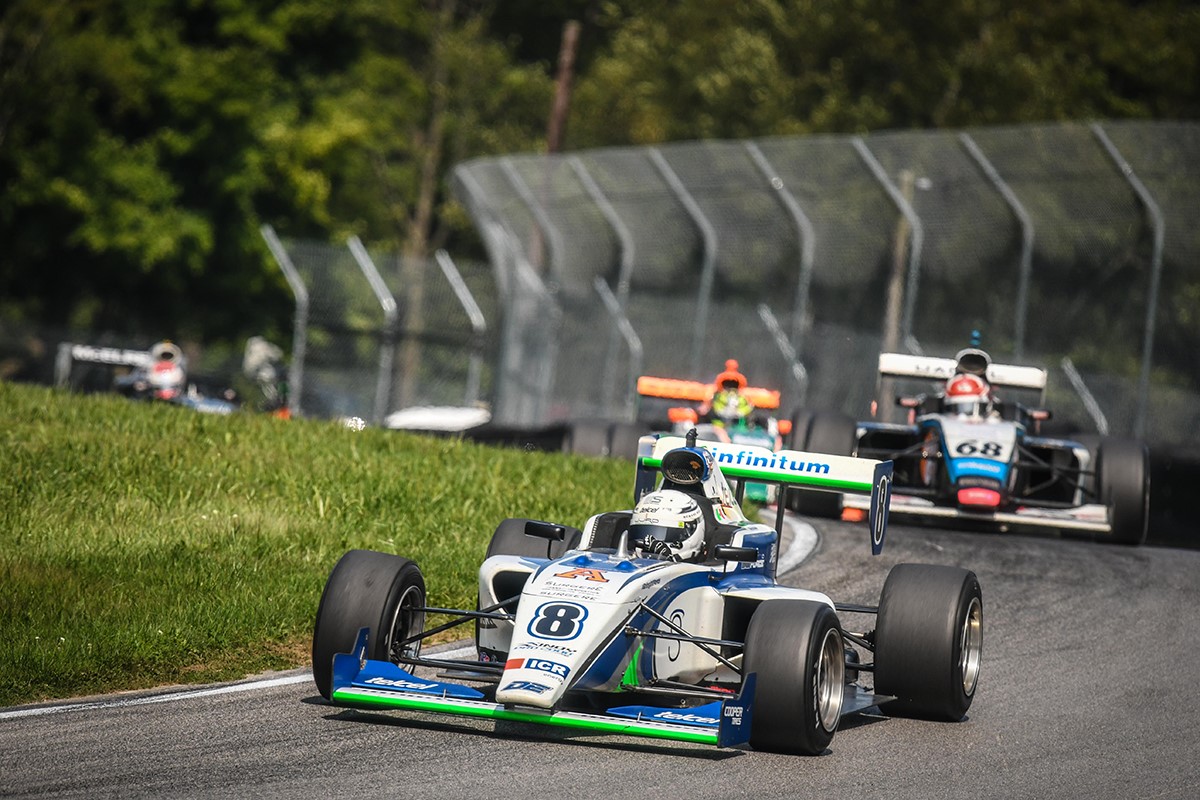 Just two event weekends remain in the quest for scholarships and awards valued at over $1 million which will propel drivers onto the next step of the highly acclaimed Road to Indy Presented by Cooper Tires open-wheel racing development ladder. Up first this coming weekend, October 10/11, both the Indy Pro 2000 Championship Presented by Cooper Tires and the Cooper Tires USF2000 Championship will visit New Jersey Motorsports Park for a triple-header alongside the Global Mazda MX-5 Cup. It will mark the series’ first visit since 2010 to the 2.25-mile, 12-turn Thunderbolt Raceway road course situated in Millville, N.J.

The 2020 season, which was delayed and reconstituted as a result of the COVID-19 pandemic, will conclude with a double-header in conjunction with the NTT INDYCAR SERIES on the streets of St. Petersburg, Fla., on October 23-25.

Consistency, Speed the Keys for Robb

More than a decade later, Robb looks to continue the recent rich vein of form that has enabled him to win four of the last five races and open up a commanding 49-point lead in the championship heading into the final five races of the season. At stake is a scholarship valued at over $600,000 which will allow the series champion to graduate onto the top step of the Road to Indy ladder when Indy Lights Presented by Cooper Tires makes its eagerly awaited return to the schedule in 2021 following a one-year hiatus.

“Anything can happen – we often see movers come up late in the season, but I think we’re in a very good position,” said Robb, 19, from Payette, Idaho. “We learned a lot in the test at NJMP a few weeks ago and we have a very good car. It’s going to be important to stay consistent, especially at the tripleheader, and speed will be key. That said, with the lead we have, if we need to hold off to avoid contact, we’ll do that. It doesn’t mean I won’t go for some moves but I’ll be a little more defensive, a little less aggressive.”

Robb’s recent streak has taken him clear of a trio of contenders — Devlin DeFrancesco, Artem Petrov and Danial Frost – all of whom are separated by just 15 points and remain very much in title contention.

DeFrancesco, 20, from Toronto, Ont., Canada, looks to bounce back from a difficult outing last month at Mid-Ohio where his Andretti Steinbrenner Autosport Tatuus PM-18 finished outside the top 10 for the first and only times during an impressive rookie campaign. Petrov, also 20, from Saint Petersburg, Russia, is the only driver aside from Juncos Racing teammate Robb to have multiple victories to his credit this year, while Frost, 18, from Singapore, also has been a consistent contender for Turn 3 Motorsport.

Six different teams have been represented on the top step of the podium from the first 12 races of an intensely competitive season. A seventh, Pabst Racing, is looking to join that group with its pair of talented rookie drivers, Hunter McElrea, from New Zealand, and Colin Kaminsky, from Homer Glen, Ill. Both have displayed strong pace, with McElrea, who finished second in last year’s USF2000 title-chase, having earned podium finishes in each of the past four race weekends.

“There have been times this season when I’ve shot myself in the foot by pushing too hard and that’s on me,” admitted 20-year-old McElrea. “But this has also been a learning year for me and for the team, being a rookie driver and rookie team in the series, competing against teams like Juncos Racing which has been in the championship for a long time and has so much prior experience and data.

“But the biggest thing for us has been getting on top of the qualifying car – there’s a big difference between the USF-17 and the PM-18 in terms of what gets the car into that perfect window in certain race or quali trims, and the tiniest things have cost us. The results show that we’re becoming more and more competitive and we’ve come so close to winning. I’ve been quick in practice and earned a few fastest race laps so the pace is there, we just need to get that qualifying car. We tested at New Jersey a few weeks ago, focusing on quali trim, and let’s just say that I’m sleeping well at night! I’m excited to hit the track.”

DEForce Racing broke through with its first victory at Mid-Ohio with Mexican rookie Manuel Sulaiman, who also has three poles to his credit. Experienced Canadian teammate Parker Thompson also has come close to adding his name to the victory roster.

The Cooper Tires Indy Pro 2000 Grand Prix at NJMP will kick off with a trio of test sessions on Friday, October 9. A 30-minute official practice session will set the ball rolling on Saturday at 10:45 a.m., followed by qualifying at 1:45 p.m. and the first of three 50-minute races at 4:35 p.m. A separate qualifying session at 10:45 a.m. on Saturday will set the grid for Race Two, at 2:00 p.m., from which each competitors’ fastest race lap will determine the starting order for Race Three at 5:00 p.m. All times are EDT.

All sessions on Saturday and Sunday will be live streamed on the Road to Indy TV App, RoadToIndy.TV and the series website, indypro2000.com.

The stage is set for an intriguing battle for top honors in The Andersen Companies USF2000 Grand Prix at NJMP between season-long pacesetter Christian Rasmussen, from Copenhagen, Denmark, and teenage challenger Reece Gold, from Miami, Fla.

Rasmussen, 20, began the year on a tear, winning the first six races in a row for the Jay Howard Driver Development team. But after romping away to an 85-point margin over his pursuers, a sequence of five consecutive poor finishes, coupled to 16-year-old Gold’s run of eight podium results in nine races, including two wins, enabled the Cape Motorsports charge to close within just three points. That was before the most recent race at Mid-Ohio, where Rasmussen steadied the ship with another hard-earned victory. Gold had to be content with another third-place finish.

With a scholarship valued at over $328,000 available to this year’s champion to assist in graduation to Indy Pro 2000 in 2021, it’s no wonder Rasmussen has shifted his focus slightly heading into the final five races of the season.

“I think the mindset has changed a little bit,” said Rasmussen. “I wouldn’t say I’m concerned but I’ve shifted my focus more toward the championship and away from going 100 percent for the win. As a driver without a whole lot of funding, I have to rely on the scholarship to progress to Indy Pro 2000 and that needs to be the priority. The other drivers have gotten so much closer over the past few races, but I know I have the speed and I trust myself and my abilities. I’ve learned from what’s happened the past few races, that I have to pull back sometimes, settle in and calm down a little bit, let the race come to me. I have adapted and overcome, and I feel as though I have come back even stronger.”

Gold, too, has changed his approach just a little. Instead of being content to chalk up the podiums, he knows he needs to take full advantage of his Cape Motorsports team’s vast experience if he is to stretch its remarkable record of success into a 10th consecutive USF2000 championship.

“The key for me this year has been just taking what I can get,” said Gold, who placed 10th in points following his rookie season in 2019. “I’ve made clean passes and haven’t forced anything – if the car is fast and I can pass someone, I will, but if we have a second-place car, then I’ll take second place. That’s helped us this year and we’ve really gotten the podiums. You can’t make any errors in this championship, so you have to be smart in your moves.

“But the Capes have so much knowledge. They’ve had so many champions and they’ve really helped me improve my craft. My plan, plain and simple, is to beat Christian on track. As long as we finish ahead of him and gain as many points as possible in New Jersey, we’ll be right there as we head to St. Pete.”

As the past few race weekends have shown, there is no shortage of talented young drivers seeking to claim their own slice of glory. One of Gold‘s Cape Motorsports teammates, Michael d’Orlando, from Hartsdale, N.Y., broke through with his first win at Mid-Ohio. Another, rookie Josh Green, from Mount Kisco, N.Y., also has been a regular podium contender. Green, furthermore, is one of very few drivers in the field with prior experience at NJMP, having earned three podium finishes, including one win, in FRP F1600 Championship Series competition in 2019.

Other contenders will include rookies Christian Brooks (Exclusive Autosport), from Santa Clarita, Calif., and another Brazilian, Kiko Porto (DEForce Racing), both of whom enjoyed a breakthrough weekend at Indianapolis with a pair of podium finishes (with Porto also snaring two pole positions), and Jack William Miller, from Carmel, Ind., with two podium finishes to date for Miller Vinatieri Motorsports.