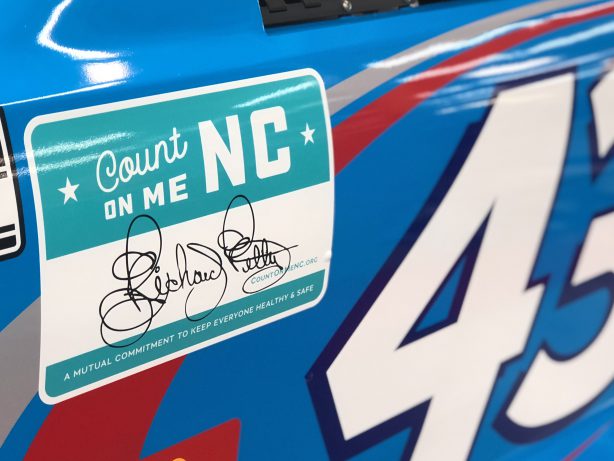 Richard Petty Motorsports (RPM)announced today a partnership with Count On Me NC, a mutual pledge and public health initiative that empowers guests and businesses to help keep everyone safe and protected. As part of the agreement, the No. 43 Chevrolet Camaro ZL1 1LE will carry the Count On Me NC badge as an associate partner in the NASCAR Cup Series (NCS) Bank of America ROVAL™ 400 at the Charlotte (N.C.) Motor Speedway on Sunday, October 11 with driver Darrell “Bubba” Wallace Jr.

Visit North Carolina will make its initial foray into NASCAR with the legendary Petty name. The agreement enlists Richard Petty, a seven-time NASCAR Cup Series champion, and Thaddeus “Thad” Moffitt, ARCA Menards Series driver, as Count On Me NC’s newest brand ambassadors, and includes the associate partnership of the No. 43 Chevrolet Camaro ZL1 1LE at the Charlotte Motor Speedway.

Moffitt and Petty have autographed the Count On Me NC pledge to help create a safer, healthier environment for everyone by following a few guidelines and best practices.

“With his support for Count On Me NC, Richard Petty will help drive COVID-19 off the track,” Wit Tuttell, director of Visit North Carolina, said. “By engaging with fans who know him from motorsports, the movies, Victory Junction and other arenas, ‘The King’ will motivate people to join his winning team and play an essential role by wearing masks, washing their hands and waiting at a distance when they’re out in public. We can all look forward to joining Richard Petty Motorsports in the Winner’s Circle as we outpace COVID-19.”

The driver of the No. 43 Columbia Omni-Heat Chevrolet Camaro ZL1 1LE for Richard Petty Motorsports has two starts in the NASCAR Cup Series at the 2.32-mile road course at the Charlotte Motor Speedway. Wallace posted a career-best finish of 24th-place at the Charlotte Motor Speedway ROVAL on September 29, 2019. In addition, the finish on the 17-turn course that combines the high-banks of the traditional oval with an infield road course was a career-best road course finish.