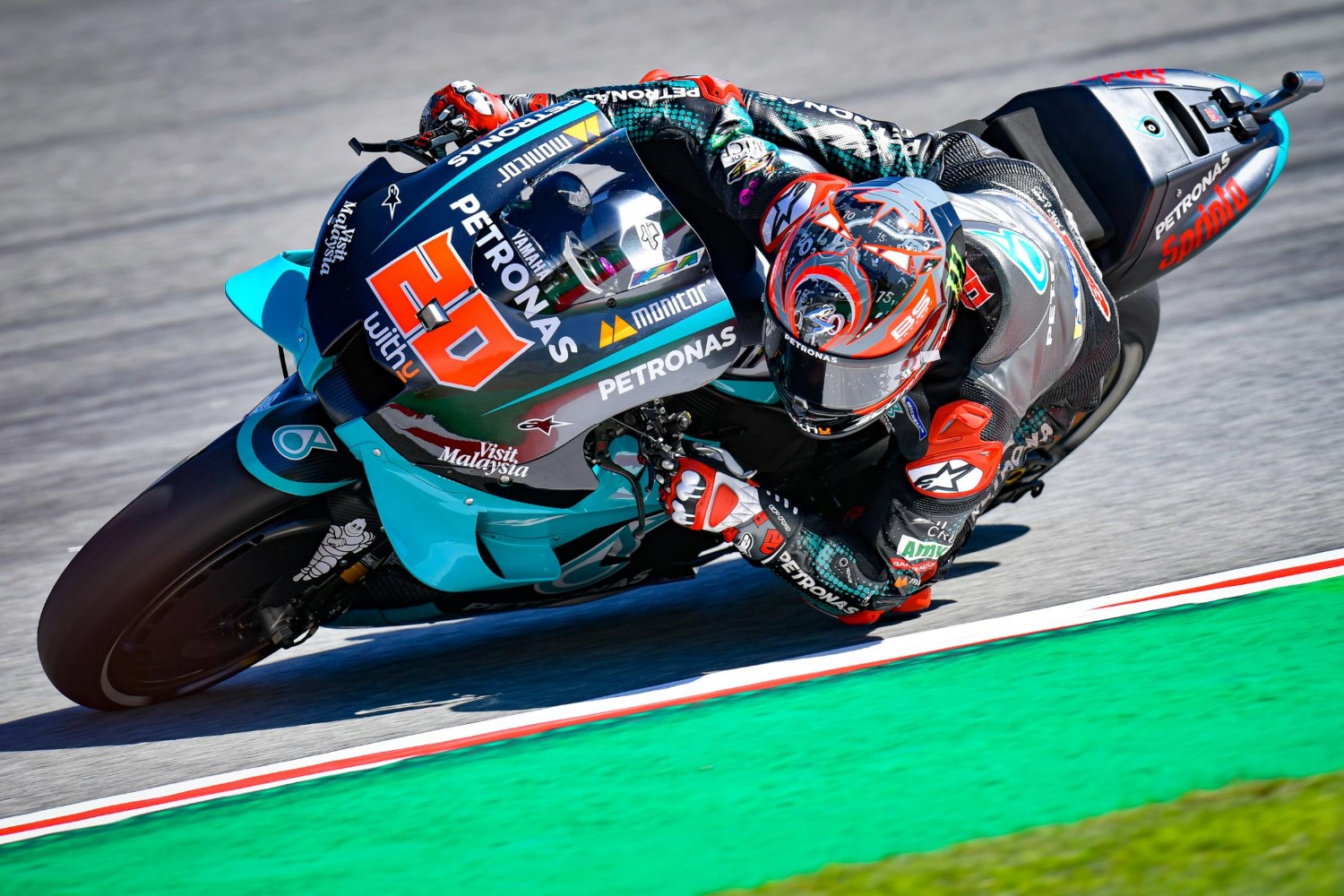 Fabio Quartararo beat Jack Miller to MotoGP pole in a dramatic French Grand Prix qualifying, with 2nd in points Joan Mir only 13th after failing to get out of Q1.

The Australian Jack Miller will launch from P2 on Sunday afternoon with Danilo Petrucci (Ducati Team) coming through Q1 to land his first front row start since the 2019 Italian GP. Second in the Championship Joan Mir (Team Suzuki Ecstar) failed to make it out of Q1 and will start P14.

Before Q2 at Le Mans got underway, Ducati duo Petrucci and Francesco Bagnaia (Pramac Racing) claimed P1 and P2 in the 15-minute dash, seeing title contender Mir having to start from way down the order after Takaaki Nakagami (LCR Honda Idemitsu) also finished ahead of the Spaniard – far from ideal for Mir, who now has a huge task on his hands.

Soon after, Q2 burst into life. Franco Morbidelli (Petronas Yamaha SRT) led Yamaha duo Maverick Viñales (Monster Energy Yamaha MotoGP) and Quartararo over the line, and it was the Italian who set the first benchmark time – a 1:32.393. Bagnaia went up to P2 with Viñales slotting into P3, but the times were going to change immediately, there were red sectors everywhere. All four Yamahas were inside the top four with Quartararo launching to P1 with a 1:31.679, Bagnaia then improved again to slot into P2 behind the home hero, 0.073 was the gap after two flying laps.

Quartararo then improved again to extend his advantage to 0.087 seconds, with Morbidelli holding P3 for the time being as the riders completed their first runs. Viñales was P4 and was seemingly – like he did at Misano – on a two-stop qualifying strategy. Petrucci and Valentino Rossi (Monster Energy Yamaha MotoGP) joined Viñales on the provisional second row with Andrea Dovizioso (Ducati Team) sitting P10 with six minutes to go. Bagnaia hadn’t pitted and after venting his frustrations at Miguel Oliveira (Red Bull KTM Tech3), Pecco was on another flyer but it went wrong at Turn 9.

Viñales was pushing for a lap but it wasn’t happening for the Spaniard. Further back though, Dovizioso was getting a wriggle on. From P10, Dovi shot up to P2 to sit 0.082 off Quartararo, and on the next lap, the Italian was on it once more. Dovi was over a tenth under but lost some time in the last sector and didn’t improve. Wounded Cal Crutchlow (LCR Honda Castrol) then came out of nowhere to set an unbelievable 1:31.686 to go provisional P2 and just behind him on the road, close mate Miller was setting the world alight with his time. The Aussie was 0.3 under at the third split and despite losing some time in the last sector, Miller demoted Quartararo to P2 and went to pole position by 0.128 – but it wasn’t done.

Viñales improved but couldn’t find his way onto the front row and went to P4, however, there were red sector times across the board. Dovizioso was one of the riders who was going faster and despite setting his personal best lap time, the Italian didn’t improve his position – but teammate Petrucci did. The latter shot up to P3 to beat Crutchlow’s time by a slender 0.012 as a Frenchman then caught everyone’s attention. Quartararo was determined to make it a home Grand Prix pole position and he was on course to absolutely smoke the competition. The number 20 was two tenths under Miller’s time heading into the last sector and the 21-year-old made no mistake, taking the checkered flag to claim his ninth MotoGP™ pole position by 0.222 from the Ducati of Miller.

Miller probably thought he’d stolen pole from Quartararo, but it wasn’t to be. After his FP3 crash though, Miller was happy to claim a front row start. Petrucci’s wonderful Saturday afternoon sees the charismatic Italian start from the front row for the first time since the 2019 Italian GP – and we know what happened there. Crutchlow’s P4 is arguably ride of the day given his physical condition, his right arm after surgery still giving the Isle of Man resident grief but a second row start proves there’s plenty of fight in the British bulldog. Fourth is Crutchlow’s first top 10 qualifying result in 2020, and he’ll lead fifth place Viñales off the line. The Yamaha star ends Q2 0.4 seconds off Quartararo and just edged out Dovizioso by 0.003 at Le Mans. P6 is Dovi’s best qualifying since his P4 in Austria.

After coming through Q1, Bagnaia claims P7 as both he and eighth place Pol Espargaro (Red Bull KTM Factory Racing) also sit 0.4 off pole position, again showing how tightly contested MotoGP™ is in 2020. Frenchman Johann Zarco (Esponsorama Racing) joins Bagnaia and Espargaro on Row 3, with two Yamahas being left disappointed in Q2. Rossi and Morbidelli have work to do on Sunday afternoon after qualifying P10 and P11, with Oliveira settling for P12. The Portuguese rider encountered plenty of troubles in FP4 with a mechanical problem and a crash, but the Styrian GP winner was just 0.694 from pole despite a P12 grid slot.