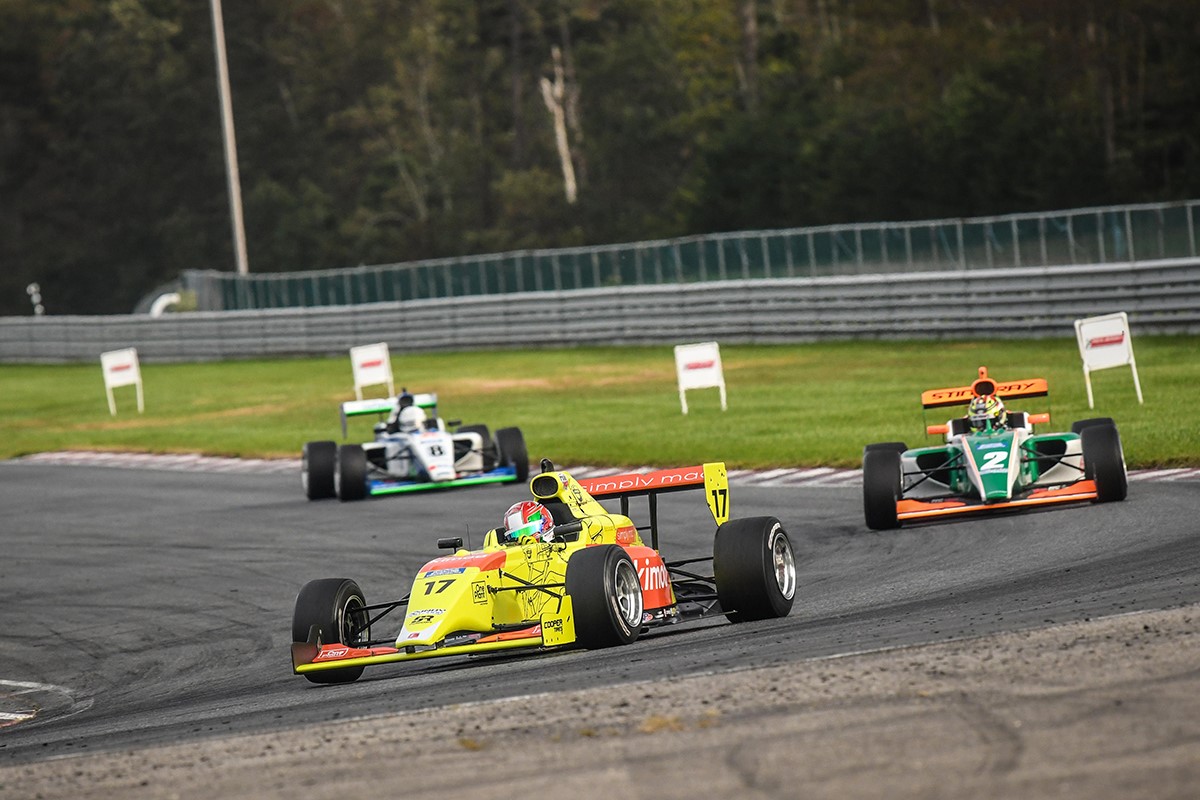 Mexico’s Manuel Sulaiman continued his good form for DEForce Racing to complete the podium in third.

DeFrancesco set the ball rolling this morning in qualifying as he edged Robb by just 0.0087 of a second to snag his third Cooper Tires Pole Award of the year. He took full advantage by making a clean start and was comfortably ahead as the field entered the braking area for Turn One. DeFrancesco then set a series of fastest laps to extend his margin to over a second in the first five opening laps before settling into a rhythm and eventually taking the checkered flag fully 5.3507 seconds to the good.

DeFrancesco’s performance ensured a second PFC Award of the season for the winning team.

Sulaiman chased gamely after Robb but was never able to make a serious challenge for position. He in turn edged clear of Canadian teammate Parker Thompson, from Red Deer, Alb., Canada, who had to work much harder to keep Robb’s teammate, Russian Artem Petrov, in his mirrors after overtaking Petrov at the start.

Singapore’s Danial Frost, winner of the opening race of the season at Road America in July for Turn 3 Motorsport, endured a disappointing day when he pulled off the road with a mechanical problem while holding down sixth place. Frost’s demise allowed Colin Kaminsky (Pabst Racing) to finish seventh, despite having fallen to the back of the field following an off-course excursion on the opening lap.

Two more races will be on tap tomorrow, with the grid for the opener established during a separate qualifying session at 10:45 a.m. ET.

Devlin DeFrancesco (#17 WTF1.com-Andretti Steinbrenner Autosport Tatuus PM-18): “That was a new situation for us, to be out in front for the entire race, so that was fun. It’s a great feeling, after all the hard work that’s gone into this, to see us evolve as a team and get faster and faster through the year. That’s the most satisfying feeling in the world. The test here last month really helped us as a team to find that speed, so I knew we’d have the race pace. We’ll see what we can squeeze out in qualifying tomorrow morning. I know there’s weather coming so there will be a few more spanners in the works. But anything can happen in the championship. I’m here to fight and Sting Ray definitely has a fight on his hands.”

Sting Ray Robb (#2 Firehouse-Goodheart Animal Health Centers-Juncos Racing Tatuus PM-18): “With the triple header, we had the choice to run on new or used tires and we decided to go out on used, and it looks as though Devlin went with freshly scrubbed new tires. Props to him, he drove great, especially on the newer tires, but I think we did a good job to get second. We had good pace, so going into qualifying tomorrow morning we’ve got two new sets of tires we can look forward to in addition to perhaps some rain racing. Who knows what will happen; no one has run here in the rain. Huge thanks to the Juncos crew. We blew a motor yesterday and they had to hustle to get me back in the car, with little time in the car until the final session. But 41 points, I’m not too worried. I’m ready to get out there tomorrow.”

Manuel Sulaiman (#8 Mandala/Viva Aerobus/Telcel/La Santa-DEForce Racing Tatuus PM-18): “This is a nice track but it’s difficult to pass, so that was our main issue today. I think we were the car that was racing closest to the car in front, and I think we managed that very well, keeping the tires from getting too degraded. If we had been able to start on pole, I think we had the pace for the win, but I know we have the speed to go for pole for the second race tomorrow. We’re happy with a podium finish today.”