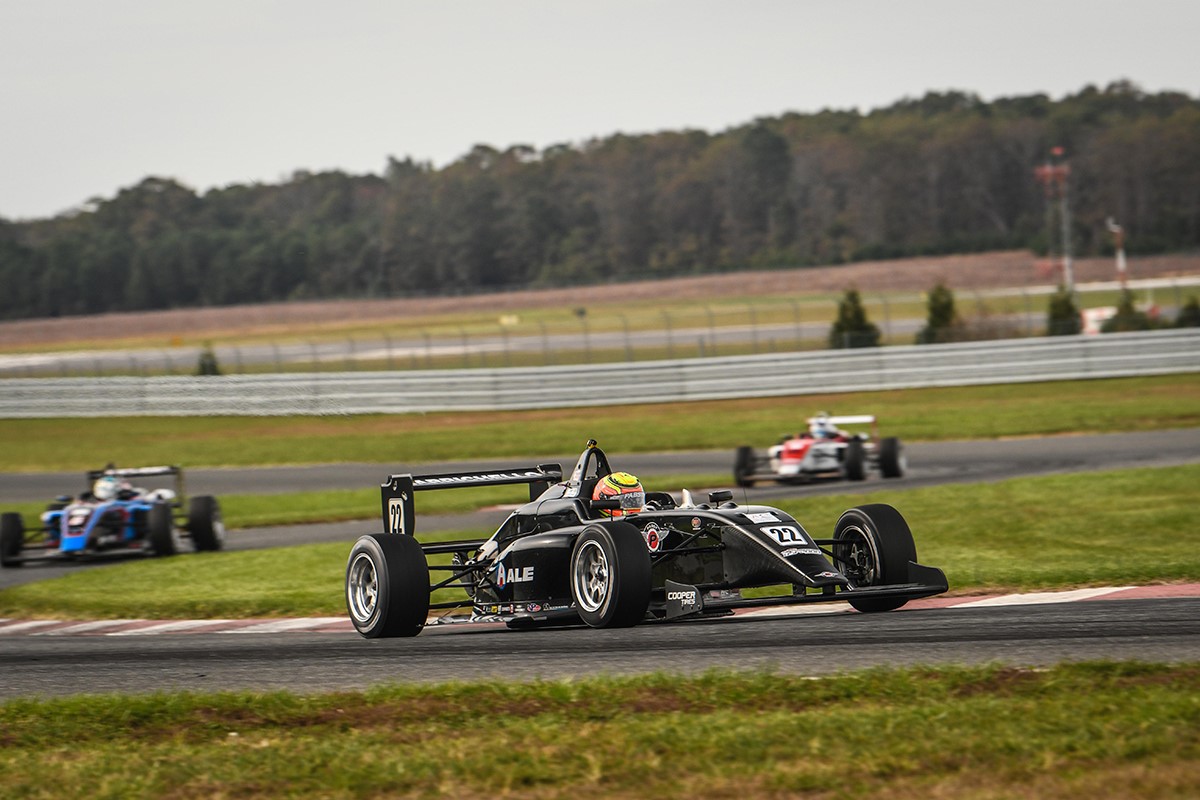 Eduardo Barrichello this afternoon made his way back to Victory Lane – for the third time this season – following an impressive drive in the first of three races that will comprise The Andersen Companies USF2000 Grand Prix this weekend at New Jersey Motorsports Park. Barrichello, 19, from Sao Paulo, Brazil, led throughout a thrilling 20-lap race for Pabst Racing, edging away in the closing stages from Denmark’s Christian Rasmussen (Jay Howard Driver Development), who extended his championship points lead with his eighth podium finish of the season.

Rasmussen barely held off a late challenge from Cape Motorsports’ Michael d’Orlando, from Hartsdale, N.Y., who also drove a fine race after starting back in seventh.

The Cooper Tires USF2000 Championship provided some entertaining action on its return to the 2.14-mile Thunderbolt Raceway road course for the first time in more than 10 years. Barrichello, though, was clearly on a mission. Following a relatively disappointing outing at Mid-Ohio last month which netted “only” one podium finish from three races, the Brazilian laid down a marker this morning in qualifying by claiming his third Cooper Tires Pole Award.

Barrichello had failed to convert either of his two previous poles into a race win but there were to be no hiccups this time around. He fended off a determined challenge from Rasmussen under braking for Turn One and remained in control for the remainder of the race. He secured The Ticket Clinic Fastest Lap Award for good measure with a new lap record of 1:18.2674, an average speed of 98.432 mph.

Rasmussen remained hot on Barrichello’s heels for the opening five laps, during which the two leaders pulled well clear of the battle for third place. Rasmussen’s closest championship challenger, Reece Gold (Cape Motorsports) held the pace initially, having fought past Christian Brooks (Exclusive Autosport) at the first corner but was clearly unable to match the leaders’ pace. Gold fell back down the order with severe handling difficulties after clipping a curb in the early laps. He eventually finished a disappointed 15th.

Brooks, from Santa Clarita, Calif., finally found a way past Gold after four laps and immediately began to close in on the two leaders. He lost some ground with a small mistake on Lap 13, but put his head down and gradually closed the gap to Rasmussen, who by this stage had slipped around 1.5 seconds behind the fleeing Barrichello.

Also on the move was d’Orlando, who reduced a deficit of more than four seconds to Brooks down to just a few car lengths with four laps remaining. The three-car battle for second was only resolved on the final lap when Brooks’ attempt to pass Rasmussen around the outside in Turn One ended with the Californian on the grass, which elevated d’Orlando into third place. He wanted more, too, but Rasmussen was up to the challenge, crossing the line merely 0.0452 of a second clear of d’Orlando.

Brooks recovered to finish fourth as the top rookie, although he was almost caught on the line by teammate Prescott Campbell, from Newport Beach, Calif., last year’s Lucas Oil Formula Car Series champion, who posted by far his strongest race of the season in fifth. Australian Cameron Shields (DEForce Racing) finished right on his gearbox in sixth.

Augie Pabst earned his third PFC Award of the season as the winning car owner.

A second qualifying session tomorrow morning at 9:00 a.m. EST will set the starting order for the first of two more races.

Eduardo Barrichello (#22 Ale-Pabst Racing Tatuus USF-17): “The Pabst Racing team and I have been working so hard and this is really a team win. I wouldn’t be here without all of them, so I’m happy to give them another win. This track is really fast so it’s hard to follow very closely because of the dirty air, so Christian wasn’t able to get to me. And the track was really dirty so everyone was really loose; we were two seconds slower than qualifying. We all struggled, but I guess I struggled the least.”

Christian Rasmussen (#6 JHDD/CSU One Cure/Lucas Oil-Jay Howard Driver Development Tatuus USF-17): “We’re focusing on the championship right now, so the goal was to finish ahead of Reece, and we did. It was a good race for me, though we all struggled to find grip on the track. There was a lot of sand so the grip levels were pretty low. Toward the end of the race, I had plenty of heat from the back. Christian Brooks tried to make a move on me on the last lap but unfortunately for him – and good for me – it didn’t stick. Finishing P2 with solid points? That keeps us pointing toward the main goal right now.”

Michael d’Orlando (#4 Focused Project Management/DB Collaborative-Cape Motorsports Tatuus USF-17): “This is such a fantastic feeling! Very few people I know understand what it feels like to be in a race like this, so to show them what it’s really like is such an honor. And it was a great race, there were some great battles, especially with Reece. He is such a clean driver and I know that every time I get next to him, he’s going to be respectful – but I also know it’s going to be a hard fight because he’s always quick. I had it in the end but that was such great racing, with Brooks and Rasmussen. All of a sudden I was third and I was thinking ‘how did I get here from seventh?’ It was a great race and I’m really happy to have earned the podium in front of so many of my friends and family.”