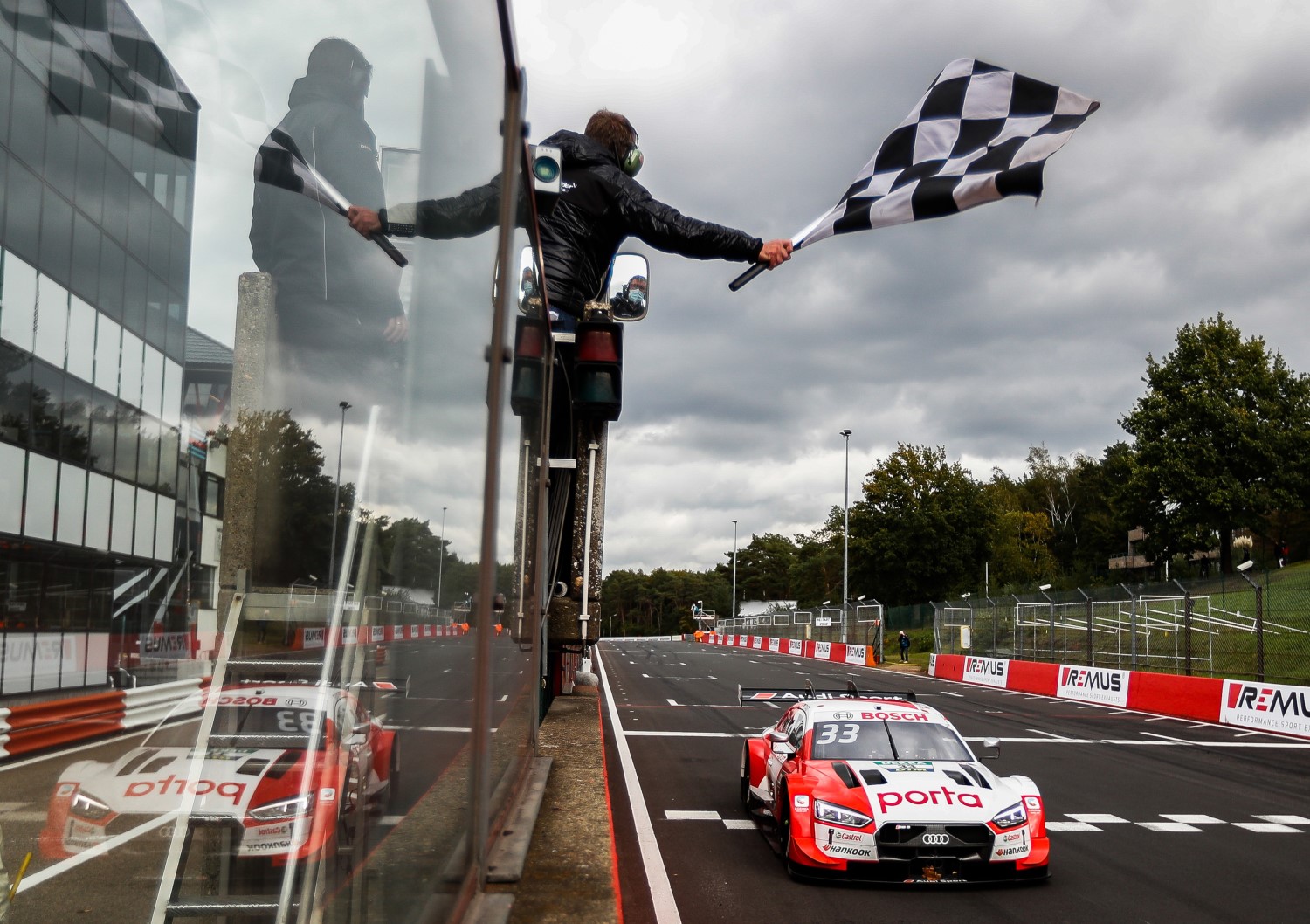 A dominant winner, strong recoveries and another successful Audi trio: René Rast scored a commanding win after coming good in the 13th race of the 2020 DTM season. The German, who had only secured pole position in the final seconds of qualifying on a damp track in the morning was able to drive his Audi RS 5 DTM across the finish line, having led from lights to flag almost unchallenged and winning with a margin of 18.8 seconds.

Second place went to Robin Frijns (NED, Audi), who had started third behind Timo Glock (GER, BMW), but immediately took over the latter’s position right after the start. Nico Müller (SUI, Audi) finished third following a start from seventh on the grid and a strong recovery.

Once again, the three dominating Audi drivers of this season ended up on the podium. Still, it is becoming more and more exciting in the drivers’ standings: Müller remains the leader with 257 points. Frijns has increased his tally to 243 points. Still only 34 points down on the leader, Rast (223 points) rounds out the triumphant trio. Thus, it is clear: the 2020 DTM champion will be an Audi driver.

At 96 points, Sheldon van der Linde (RSA/BMW) remains fourth in the championship standings but is no longer in a position to catch the Audi trio. The best-placed BMW driver in the Saturday race was Timo Glock, who was fourth across the finish line, just missing out on a podium result.

Qualifying in the morning already produced hot action at Zolder, in spite of the rather chilly temperature of eight degrees Centigrade: parts of the track hadn’t yet dried out. As a result, all drivers opted for rain tires rather than slicks, something that didn’t change as qualifying went on. In the battle for pole position, BMW’s Timo Glock was in front for quite a long time.

It could have been the first pole of the current season for the brand from Munich, had it not been for his compatriot René Rast posting the fastest lap time of 1m 28.987s in his Audi RS 5 DTM with twelve seconds remaining. For Audi, it was the 20th consecutive pole position while BMW at least scored the first additional championship points in qualifying this season.

Although Rast started from first place on the grid on a slightly damp surface and Glock, second on the grid, on dry asphalt, Rast kept the ex-Formula 1 driver at bay as the lights went out. He was leading the race right from the start and wasn’t to lose it anymore until the checkered flag was out. Glock’s alleged advantage at a dry track was gone after the first corner: Frijns and Mike Rockenfeller (GER, Audi) got past. Glock, meanwhile, temporarily claimed second place again as a result of his pit stop strategy, only for him to lose it again after a thrilling battle at the end of lap 23 and three corners later. The situation cost Glock and Frijns around two seconds. Philipp Eng (AUT, BMW) and Jamie Green (GBR, Audi) staged a battle for eighth from lap 21 onwards, including multiple incidents. After an unauthorized overtaking maneuver outside the track limits, Green had to have eighth place back to Eng again. A few laps later, Eng incurred a warning for more than one change of direction. The heated-up battle between the two led to contact between the BMW and the Audi. The front-end damage that had resulted from the collision forced Green to park his car in the pits.

Thrilling duels in the midfield

Nico Müller, who initially had to make do with his position for a long time meanwhile had worked his way up from seventh to fourth place. In the final third of the race, he attacked Glock, closely followed by BMW driver Marco Wittmann (GER) and Harrison Newey (GBR, Audi). On lap 31, Müller overtook Glock after a hard, but fair battle. On lap 33, Wittmann and Newey also increased the pressure. Wittmann eventually had to let the DTM rookie past. Shortly after that, a gearbox failure occurred on the BMW M4 DTM after running hard over the curbs and the two-time DTM champion retired in the pit lane.

After a failed 26.4-second pit stop due to technical issues, while changing the front wheels, Mike Rockenfeller dropped back from fourth to last on lap 13. In a spectacular recovery, the former DTM champion still managed to finish eighth, scoring championship points as a result. Loïc Duval (FRA, Audi), who had started tenth, incurred a five-second pit stop penalty for jumping the start and eventually was tenth across the line.

The 14th race of the season on Sunday, 11 October, will be broadcasted on German TV