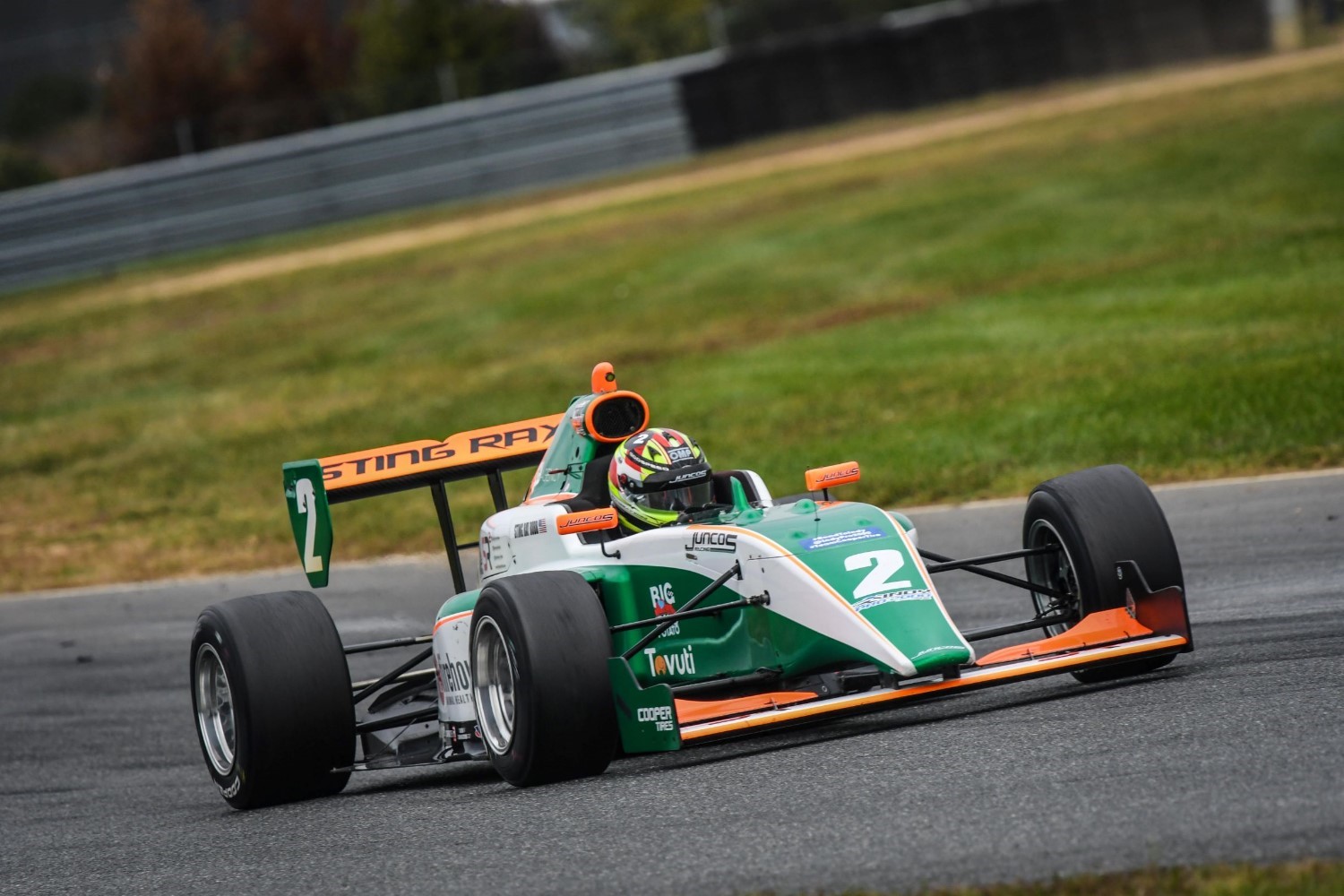 Robb scored a dominant victory in the first of two races today. Later in the afternoon he cruised to a third-place finish, which, allied to a similar result earlier in the day for Juncos Racing teammate Artem Petrov, was enough to secure a third successive Team Championship for Argentinean-born Ricardo Juncos’ Indianapolis-based organization.

Robb began his day in qualifying by claiming his third Cooper Tires Pole Award of the year by a relatively comfortable margin of 0.3135 of a second over Thompson. His superiority was even more apparent in the race as he immediately romped into a lead of more than six seconds before throttling back and cruising to victory, his sixth of the season.

Robb’s title aspirations received an additional boost when his closest challenger, and yesterday’s winner, Italian-Canadian Devlin DeFrancesco (Andretti Steinbrenner Autosport) locked up his brakes at Turn One on the opening lap and caromed into Sulaiman. Both cars headed to the pits for repairs. DeFrancesco also was required to serve a drive-through penalty for initiating the contact.

Jacob Abel (Abel Motorsports), from Louisville, Ky., claimed the Tilton Hard Charger Award after rising from 10th on the grid to sixth.

Farther back, several drivers took the option of making pit stops for a fresh set of Cooper tires. The ploy worked perfectly for McElrea’s teammate, Kaminsky, who returned to the track and posted the fastest lap of the race to secure the coveted pole position for the final race of the weekend.

A mid-afternoon rain shower ensured that everyone required wet-weather Cooper tires for the final race. Kaminsky held his own during the opening stages, edging away a little from DeFrancesco, who dodged past a conservative Robb at the start but instead found himself under strong pressure from Sulaiman and then Petrov, who had quickly made up ground from sixth on the grid.

Petrov steamed past Sulaiman on the fifth lap, but then made contact with DeFrancesco at Turn Six as he attempted to wrest away second position. Both cars were out on the spot. Cue the Pace Car for its only appearance of the weekend.

The demise of his two closest title rivals elevated Robb to fourth place, which was all he required to wrap up the championship comfortably in advance of the final two races of the season.

Up front, Kaminsky continued to lead at the restart but was no match for Sulaiman, who sailed around the outside under braking for Turn One on the 12th lap, then pulled away inexorably. He eventually took the checkered flag a comfortable 10.7528 seconds to the good.

McElrea struggled in the conditions, slipping from second at the restart to a disappointed fifth behind both the jubilant Robb and Thompson.

While Juncos Racing and DEForce Racing shared the two PFC Awards as the winning car owners, DEForce Racing’s Kory Enders, from Sugar Land, Texas, also took home the final Tilton Hard Charger Award after moving up from 11th on the grid to sixth at the checkered flag.
Robb has already put the championship beyond the reach of his rivals, but DeFrancesco, Petrov, Frost, McElrea, Thompson and Sulaiman all hold mathematical chances of finishing second in the points table, which will be decided in conjunction with the NTT INDYCAR SERIES at the Grand Prix of St. Petersburg, Fla., on October 23-25.

Sting Ray Robb (#2 Firehouse-Goodheart Animal Health Centers-Juncos Racing Tatuus PM-18): “I’m happy to get a podium finish to put the final stamp on the championship. We had every condition this weekend and I’m happy with our performance. I had some wheel spin on the start in the rain and lost a few positions so I’m happy we were able to come back and take a podium.

“I really can’t wrap my head around the championship right now, it’s still settling in. We hope to win the Indy Lights championship eventually and get into the NTT INDYCAR SERIES, but we’re just starting that process. We’re getting to where we want to be and I’m so happy with everything we’ve done the past few years to get to this point. I’m so grateful to the team, and to my mom and dad – I’m so thankful to be able to share this with them!”

Manuel Sulaiman (#8 Mandala/Viva Aerobus/Telcel/La Santa-DEForce Racing Tatuus PM-18): “I had an amazing car all weekend, so thanks to the team for that. It was good to deliver the win in the end. The track was very difficult today, in both races, but the team gave me a car that could find the grip. I was able to get by Colin after the restart and pull a good gap to the checkered flag and I’m super happy for me and for the team. And I’m so happy to get the win for my family and friends who were here – and I want to dedicate this to my mom. Tomorrow is her birthday, so this is a nice birthday gift.”

Colin Kaminsky (#19 Slick Locks-Pabst Racing Tatuus PM-18): “We were in the lead pretty handily until the caution came out but hats off to Manuel – he had so much pace so when he got by, he just drove away. But I couldn’t be happier with a second-place finish, for myself and for the team, considering how tough it was out there today. We’ve had a rough couple of stretches and we were able to bounce back with the pole today, that was a good call to come in during Race Two. And I’m really happy for Sting Ray: to see him clinch today was really cool.”

Parker Thompson (#9 DEForce Racing/Valkyrie Velocity-DEForce Racing Tatuus PM-18): “Another bridesmaid – it’s like going to a bunch of weddings and not getting married! We just need to keep our heads down and keep moving forward. As my engineer and I always say, aim for the bushes and hope for the best! The stars just haven’t aligned this year – we missed out on pole yesterday and this is just one of those places where it’s really difficult to pass. Petrov did his best, he wore me down, but I was able to hang onto the tires and keep second.”

Artem Petrov (#42 Road To Success/Bell/226ers-Juncos Racing Tatuus PM-18): “It was frustrating, because it is so difficult to pass because of the aero wash. I was able to get close to Parker, but my main goal was to have a clean race so I’m happy with third.”