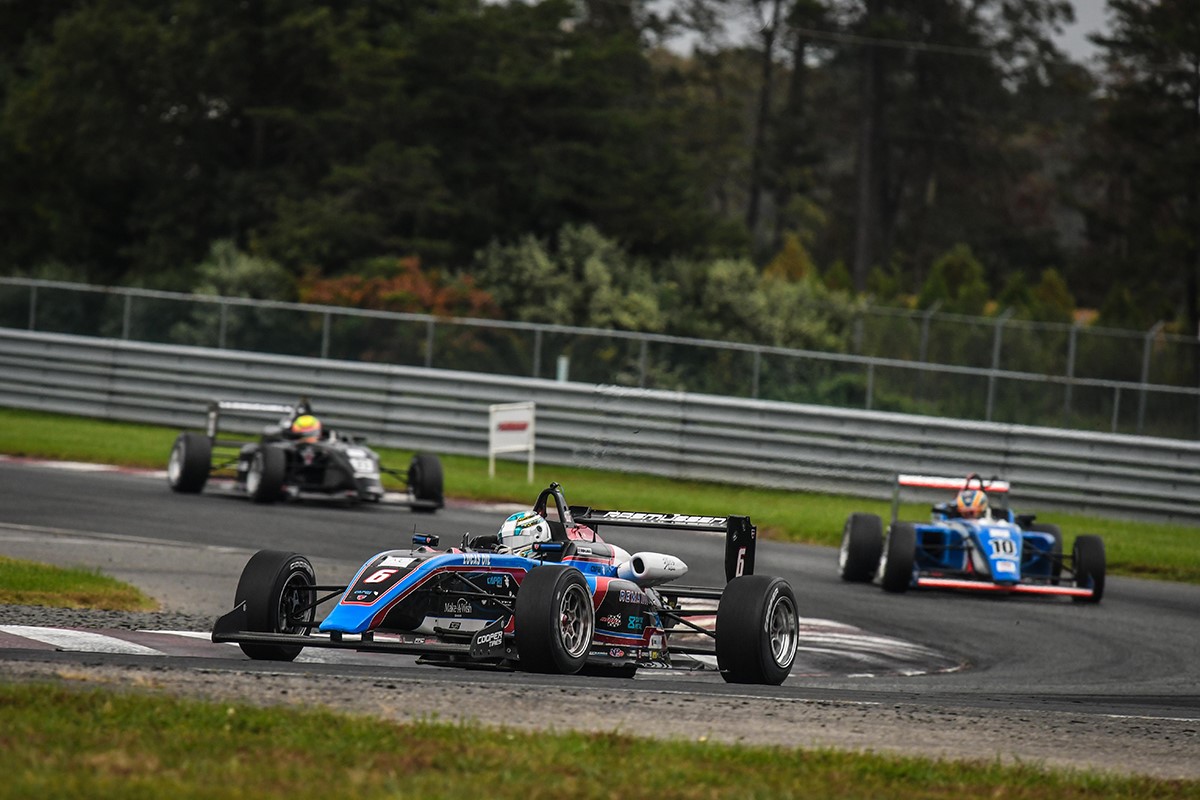 Rasmussen, 20, from Copenhagen, Denmark, has had a roller-coaster ride this year. He began with a stunning sequence of six wins, then saw a massive championship lead dwindle from 87 points to just three before coming back on strong again to win three out the most recent four races. After a second-place finish on Saturday, Rasmussen began this morning by claiming his eighth Cooper Tires Pole Award of the season during qualifying.

He immediately took control of the race, too, by completing the first lap more than 1.2 seconds clear of Shields, who started on the outside of the front row. Thereafter Rasmussen was content to not over-tax his Cooper tires and remain just far enough ahead of the Australian to ensure there could be no serious threat to his lead.

In stark contrast to a thrilling opening race of the weekend yesterday, Race Two was remarkably tame. Barrichello chased Shields throughout the 20-lap contest while at the same time coming under increasing pressure from d’Orlando in the closing stages. The top four crossed the finish line covered by just over two seconds but their positions had remained unchanged.

After qualifying sixth, Yuven Sundaramoorthy (Pabst Racing), from Oconomowoc, Wis., managed to sneak past erstwhile championship contender Reece Gold (Cape Motorsports), from Miami, Fla., on the third lap. He made not the hint of a mistake to effectively end Gold’s title aspirations.

A little farther back, top rookie Christian Brooks (Exclusive Autosport), from Santa Clarita, Calif., earned the Tilton Hard Charger Award after climbing from 13th on the grid to seventh ahead of Jack William Miller (Miller-Vinatieri Motorsports), from Carmel, Ind. They were chased across the line by Green, Josh Pierson (Exclusive Autosport), from Portland, Ore., who scored his first top-10 finish, and teammate Campbell.

Several drivers took the opportunity to take on a fresh set of Cooper Tires during the race in hopes of claiming The Ticket Clinic Fastest Lap Award, which would in turn secure pole position for the final race of the weekend. That honor was claimed by Jay Howard Driver Development teenager Nolan Siegel, from Palo Alto, Calif., who established a new race lap record of 1:17.7495, an average speed of 99.087 mph.

Siegel duly led the opening three laps of the final race of the weekend, which began on a dry track but with clouds looming ever darker, only to be greeted by a sudden rain squall as he led the field into Turn Four the next time around. Siegel, along with a few other drivers, unwittingly skated off the road, forcing race officials to display the red flag and allow time for everyone to switch onto wet-weather Cooper tires.

Siegel’s misfortune handed the advantage to Shields, but it wasn’t long before Rasmussen began to pile on the pressure. Sure enough, on Lap Eight, Rasmussen swept past serenely on the outside line at Turn One, then romped away to a clear victory. His final margin of victory was 9.9579 seconds.

Rasmussen’s pair of wins increased his tally on the year to nine, which, allied to three more wins during his rookie campaign in 2019, took his career total to 12 – second equal with fellow former champions J.R. Hildebrand (2006) and Kyle Kirkwood (2018) on the all-time list, just one behind 1993 champion Chris Simmons. Rasmussen also snared two more PFC Awards for former series champion Jay Howard as the winning team owner.

Green and Campbell also displayed impressive skills on the treacherous track. Green rose from 10th on the grid to second ahead of Campbell, last year’s Lucas Oil Formula Car Series champion, who secured the Tilton Hard Charger Award after rising from 14th to a season-high third. Campbell capped his strong weekend with The Ticket Clinic Fastest Lap Award, set just before the rain started.

The championship will conclude with two more races, this time in support of the NTT INDYCAR SERIES, on the streets of St. Petersburg, Fla., on October 23-25.

Christian Rasmussen (#6 JHDD/CSU One Cure/Lucas Oil-Jay Howard Driver Development Tatuus USF-17): “We don’t have a lot of rain races, so it’s good to have the chance to show people what we can do. You want to showcase your talent out here, that’s what it’s all about. Starting P2 on slick tires was sketchy, but when we shifted to the rain tires I was able to get the lead and build the gap. It was a great day, with two race wins.

“We knew that if we had a very good weekend that we could clinch, but we just took it one race at a time. I’m so happy for myself and for the team. We can celebrate now and go after it at St. Pete. I’m so proud of the job the entire team did this year. It’s only our second year in the series, and we’ve come a long way. They did such an amazing job.”

Cameron Shields (#10 Valkyrie Intel-DEForce Racing Tatuus USF-17): “It was a really good race, but a difficult start! Dudu got a good tow on the inside so I was a bit unsure, but I held the outside, kept it clean and held the position. The aero wash was the most difficult part about the race – every time I’d catch Rasmussen I would go backwards. It was just a forwards and backwards kind of race. I didn’t test here so I was learning the track yesterday, so figuring out what part of the track was crucial was key for us and the team.”

Eduardo Barrichello (#22 Ale-Pabst Racing Tatuus USF-17): “That was frustrating. I had a really good draft going into Turn One and Cameron left me good space, but I had a lockup and we almost touched. We both had similar races, in that it was difficult to stay close to him, especially in the fast corners – I would catch him and suddenly understeer like crazy. We were both catching Christian late in the race, but passing was something else entirely.”

Josh Green (#2 JHG Investment Fund-Cape Motorsports Tatuus USF-17): “The conditions changed very quickly! There was no grip in Turn Four on that last lap on the slick tires, so everyone went wide. But when we went back out on rain tires, I was super confident in the car – the Cape guys really gave me a good car. I came out in fifth and just started picking guys off one by one. This is my first time racing in the rain in the USF2000 and it was a lot of fun – these cars really handle the wet!”

Prescott Campbell (#1 Lucas Oil School of Racing-Exclusive Autosport Tatuus USF-17): “I capitalized in those couple of laps on the slick tires. We had a good setup for the changing conditions and found where the grip was on each lap so I was able to make moves under braking. This is the first race we’ve raced in the rain so I wasn’t sure how it would be on rain tires but I found the grip again. Conditions changed on every lap and you really had to use your brain the entire way in order to finish. I’m really grateful to the team, to finally get this podium, and I’d like to thank my family – my parents and my sister – for always supporting me and believing in me. We’ve had some tough times this season and this really makes it all pay off.”