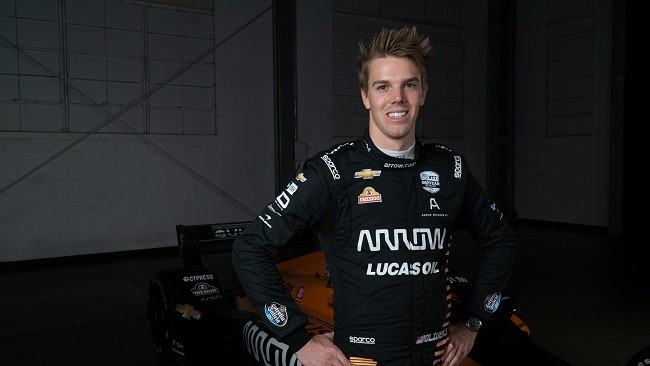 A reader asks, Dear AutoRacing1.com, Any word on why Arrows McLaren SP let Askew go?  Before his concussion I thought he was driving well for a rookie. Bruce Steele

Dear Bruce, When in doubt, follow the money. Most IndyCar drivers have to buy their ride. No check, no ride.  While Askew had some money from his Indy Lights title for this season, there was nothing for 2021, so the team is out looking for another driver that can bring a big check. They were hoping to get retiring NASCAR driver Jimmy Johnson but Chip Ganassi stole him.

There are a number of F1 drivers who might decide to buy the seat, and Mexican Sergio Perez has sponsorship backing and Perez is the driver the team would love to have, but Perez is trying to stay in F1.  He would be a perfect driver to team with fellow Mexican Pato O’Ward, and it could happen if IndyCar were to race in Mexico City again. Why they’re not there is a complete mystery to any common-sense person.

What’s really holding back IndyCar from growing and landing a 3rd engine manufacturer like Ferrari is their TV deal. The TV ratings on NBCSN have been horrible for 11 years and when they lost ABC, they lost ESPN International – so globally IndyCar went dark – off the radar – out of sight, out of mind.

And title sponsor NTT Data does almost zero activation, so that does not help to grow the name recognition of the sport.

Getting back to Askew, we wish him well, but if he has no money/sponsorship he is going to have a hard time. Mark C. reporting for AR1.com

Arrow McLaren SP announced today that Oliver Askew will leave the team at the end of 2020. In the meantime, Askew will be able to pursue new opportunities for the 2021 NTT INDYCAR SERIES season, and will compete for the team at the Grand Prix of St Petersburg, subject to him being declared fit to race by the INDYCAR medical authorities.

“We believe that Oliver has a great deal of talent and potential for the future. He has had an incredibly difficult rookie year, with a lack of overall track time and recent medical issues,” said Arrow McLaren SP co-owner Sam Schmidt. “We want to give Oliver the time to pursue new opportunities for 2021 and the ability to race at St Pete. Come the end of the year, we will wish Oliver the very best in all of his future endeavors, and he will always be a friend of the team.”

“It’s been a steep learning curve this year but I appreciate all the experience I have gotten with Arrow McLaren SP. I’ve certainly had to develop very quickly as a driver and I know I have shown my speed and capability when able to this season. However, I think it makes sense to pursue the next chapter of my career outside the team,” said Oliver Askew. “I am grateful for all the support I’ve received from my crew, the team and all the fans. I wish the entire team well in the future.”

News about the 2021 driver lineup for Arrow McLaren.