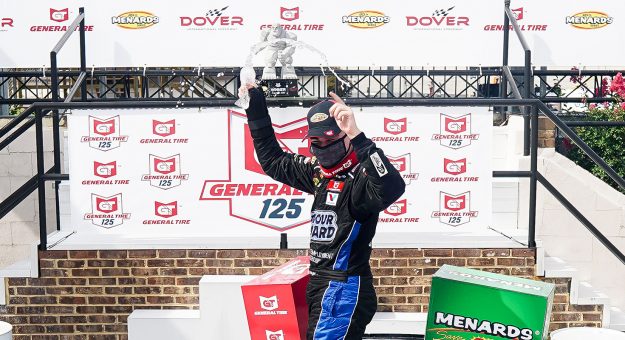 DOVER, Del. — It wasn’t the dominating, championship coronation performance of a year ago. But Friday’s win at Dover International Speedway was just as satisfying for Sam Mayer.

Mayer drove his No. 18 Vince Lombardi Cancer Foundation Chevrolet past race leader Ty Gibbs with 20 laps to go and rolled to the win in the General Tire 125. The 17-year-old from Franklin, Wisconsin, strengthened his hold on the ARCA Menards Series East championship lead with his second win in three races this season.

It is Mayer’s ninth win over the ARCA Menards, East and West series since his 2018 debut. Last year’s Dover win in the East came under the NASCAR banner.

Mayer entered the day with a one-point lead over Gibbs, who won the General Tire Pole Award in qualifying Friday. The 17-year-old North Carolina driver went out and led the first 105 laps before Mayer was able to significantly close the game. Mayer moved Gibbs out of the way and powered by to take the lead.

Gibbs appeared to have a right front tire down as he slammed into the Turn 2 wall five laps later, ending his day prematurely and leaving him with a 12th-place finish.

NASCAR Cup Series driver David Gilliland, in a second car for his DGR-Crosley team, finished second — 2.330 seconds back of Mayer.

The late-race turn of events allowed Mayer to open up a 13-point cushion on Gibbs, and leads Cabre by 27.