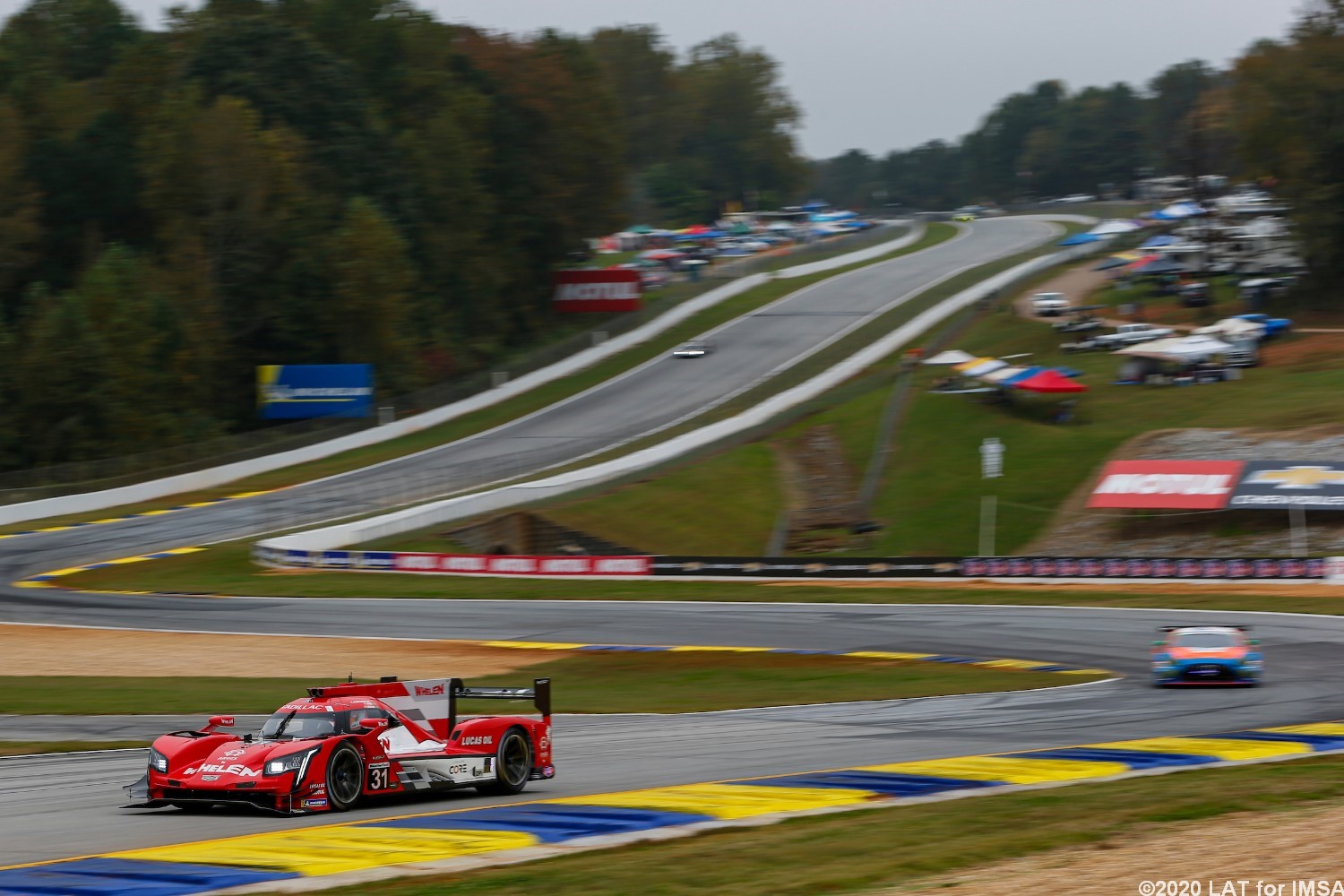 The cool, clear weather conditions are expected to be similar on Saturday, when the 23rd annual 10-hour marathon will be contested.

Felipe Nasr (No. 31 Whelen Engineering Racing Cadillac DPi-V.R) was fastest overall, lapping the 2.54-mile, 12-turn Michelin Raceway circuit in 1 minute, 10.175 seconds. That narrowly edged the No. 10 Konica Minolta Cadillac out of the Wayne Taylor Racing stable, with the car’s fastest lap clocked just 0.04 seconds back by IndyCar star Scott Dixon, who is serving as the team’s third driver this weekend.

The two Team Penske Acura ARX-05 DPi entries were next on the speed chart, with the No. 6 car driven by Dane Cameron narrowly ahead of Ricky Taylor in the No. 7. The top four Daytona Prototype International cars were separated by just 0.011 second.

Filipe Albuquerque, the third driver on the No. 31 along with Nasr and Pipo Derani, posted the fastest overall lap of the day’s three practices, 1:09.230, in the second session.

Mikkel Jensen was quickest in the Le Mans Prototype 2 (LMP2) class Thursday night, running a 1:11.195 lap for Tower Motorsports by Starworks in the No. 8 ORECA LMP2. Jensen turned a slightly quicker lap, 1:11.078, in the opening practice.

The No. 14 AIM Vasser Sullivan Lexus RC F GT3 driven by Jack Hawksworth led the 13-car GT Daytona (GTD) field under the lights Thursday night. But it was the No. 48 Paul Miller Racing Lamborghini Huracán GT3 driven by Bryan Sellers in the first practice that was tops for the day at 1:19.946.

The WeatherTech Championship cars are idle until qualifying at 12:30 p.m. ET Friday, with a live stream available on IMSA.com. Live coverage of the race starts at 12:30 p.m. Saturday on NBCSN.

Corvette Racing’s No. 3 team is on a roll, with Jordan Taylor and Antonio Garcia combining for five wins this year to lead the GT Le Mans (GTLM) class of the IMSA WeatherTech SportsCar Championship.

Although the No. 4 Corvette pairing of Tommy Milner and Oliver Gavin ranks second in the GTLM standings, the 2020 campaign has not been as smooth. Since earning victory in the new mid-engine Corvette C8.R in the Cadillac Grand Prix of Sebring in mid-July, a trio of second-place class finishes has been their best results.

Last Saturday night at the wet Charlotte Motor Speedway ROVAL, Milner crashed late in the event. He attributed the accident to a breakage of a right-rear suspension component that was near the end of its scheduled time on the car.

With an extremely tight turnaround to repair the damaged car prior to this Saturday’s Motul Petit Le Mans at Michelin Raceway Road Atlanta, the Corvette team has been burning the midnight oil.

The No. 4 Corvette was 1.7 seconds off the class-leading pace Thursday in the first practice session at Petit Le Mans, but Milner closed the gap to less than a half-second in Practice 2.

“Unfortunately, the guys are used to that kind of thrash,” Milner remarked prior to Thursday night’s third and final practice session. “The car has felt great so far this weekend, and it seems like there are no ill effects from the accident. The toe setting was a little bit off because of a new steering rack, but the guys fixed that immediately.

“A lot of the things that got fixed and replaced were all parts that were going to come off the car for this race anyway,” Milner continued. “There was a lot of work, but most of the stuff was planned already. The biggest challenge for them was, ultimately, getting some of the bodywork to fit the way it’s supposed to. Those little details probably took more time than they would have liked.”

“Had the part lasted another 15 minutes (to the end of the race), it was scheduled to be changed anyway and we would have caught it then,” Milner said. “We were a little unlucky there. I think the loads from the banking on the car at Charlotte, even in the wet, were quite a bit higher than what we see at Daytona.”

Gavin is a five-time class winner at Petit Le Mans, but his last victory in the classic event came a full 10 years ago. With the help of Milner and third driver Marcel Fassler, Gavin hopes to notch another GTLM win and cut the 24-point deficit to the No. 3 team in the title chase.

Corvette Racing finished 1-2 in the six-hour TireRack.com Grand Prix at Michelin Raceway on Sept. 6, with Taylor and Garcia triumphant in the No. 3 car.

“The (September race) was really a great dress rehearsal for Petit Le Mans,” Gavin said. “We gathered a large amount of data from that race, and you get to see how you stack up against everyone else. The encouraging thing for Tommy and I is that we came away with a very strong second place. If a couple of other things had fallen our way, then we could have very easily come home with a victory.”

Plaid Is Back in Style at Motul Petit Le Mans

The GT Daytona (GTD) class ranks are bolstered this weekend by the return of the Pfaff Motorsports Porsche 911 GT3R. The No. 9 car with the distinctive plaid Motul livery will be shared by Dennis Olsen, Zacharie Robichon and Lars Kern.

The team’s last start came in the season-opening Rolex 24 At Daytona in January. With an international driver lineup and 85 percent of the team’s personnel based in Canada, COVID-19 travel and border crossing restrictions put a crimp into Pfaff’s effort in the 2020 WeatherTech Championship.

“Our team has been keeping busy within Canada since putting our IMSA program on hold in March, but we are thrilled to see the Motul ‘Plaid Porsche’ back in action on one of North America’s best road courses at Road Atlanta,” stated Steve Bortolotti, Pfaff Motorsports’ team manager. “The company has done an amazing job doing productive things and keeping our people busy.

“It was very disappointing not to be racing in July when the WeatherTech Championship made its return,” he added. “We felt we had all the pieces in place to make a run at the championship in our sophomore season.”

While Pfaff reassigned some staff to its Canadian Touring Car Championship, where teenager Zachary Vanier won five of six races en route to the series crown, the organization’s IMSA drivers were essentially idled.

“To say we’re excited to be back would be an understatement,” said Robichon, a 28-year old Canadian. “It will be a difficult task having missed so many races, but the team was able to shake the rust off in a short and positive test at Canadian Tire Motorsports Park last week. I’m sure that will help everyone and myself get back up to speed quickly after our time away from the championship.”

The No. 9 crew still has work to do. Following Thursday’s three practices, it ranked at the bottom of the GTD speed chart. by John Oreovicz