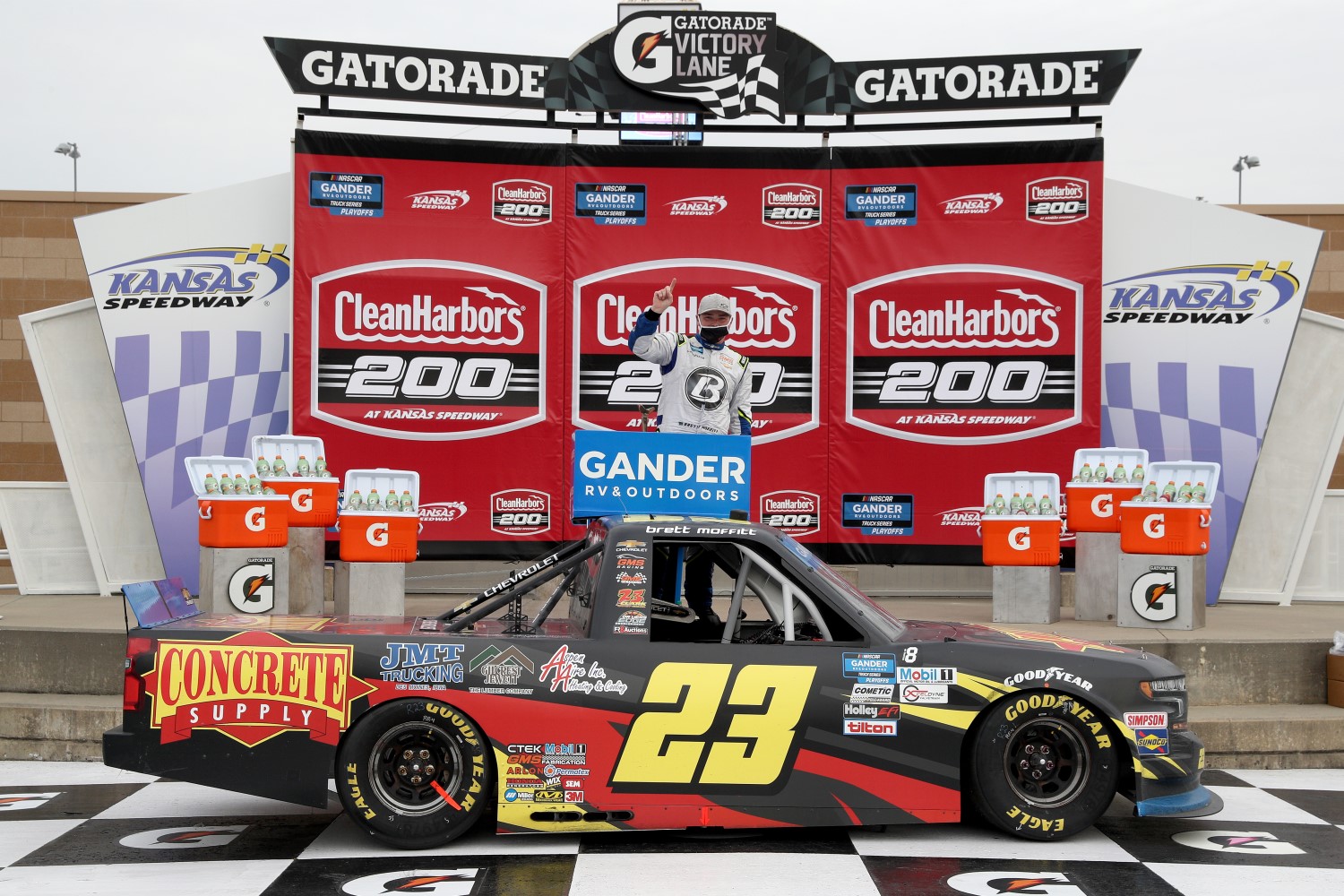 After four runner-up finishes on the season, former NASCAR Gander RV & Outdoors Series champion Brett Moffitt earned his first victory of 2020 in the Clean Harbors 200 at Kansas Speedway Saturday evening. And while that first win came 20 races into the season, it was particularly impactful — officially landing Moffitt in the Championship 4 that will compete for the series title Nov. 6 in Phoenix.

Moffitt, 28, held off his GMS Racing Chevrolet teammate Sheldon Creed by a mere .111-seconds for the overtime victory. The race went into extra laps just after Moffitt took the lead from another teammate and fellow playoff driver Zane Smith on Lap 132 of the scheduled 134-lap race.

The two made contact while racing side-by-side and Smith spun out, recovering to finish 11th with seven laps of overtime.

Hailee Deegan finished 16th — the best-ever showing for a female driver in her Truck Series debut.

“Oh man, I think my goal was just to finish the race,” a smiling Deegan said. “It’s crazy compared to ARCA racing how intense this racing is, how competitive it is. You’re trying to block one guy while pass another and next thing you know, you’ve got two guys blowing by you if you don’t make a successful pass. It’s a lot tougher racing, but I think we definitely had a successful day.”

Creed, who led a race-best 61 laps, won both stages, increasing his series-best mark to nine stage wins on the season.

With the victory, Moffitt, the 2018 Gander Trucks champion, earns his shot at a second title in the Phoenix season finale. Creed’s runner-up effort gave him the points lead by seven points over the regular-season champion Hill. Smith’s impressive recovery from the late-race spin kept him ranked fourth with a seven-point edge over Enfinger. Crafton is ranked sixth, followed by Ben Rhodes and Tyler Ankrum, who both had troubles on Saturday.

The four drivers who will race for a championship include any playoff driver who wins one of these three final round races — as Moffitt did. At least one position will go to the driver with the highest points tally after that Oct. 30 race at Martinsville.

Deegan’s history-making finishing was only part of a huge career day for the 19-year old Californian.

Shortly before the green flag, Ford Motor Company announced Deegan will drive in the series in 2021 competing for Rookie of the Year honors driving the No. 17 Ford for the DGR-Crosley Racing team. Deegan competed in the ARCA Menards Series full time this season, with a sixth-place finish at the Kansas Speedway season finale on Friday. She was the series’ Rookie of the Year, finishing third place in the standings with a best showing of runner-up twice.