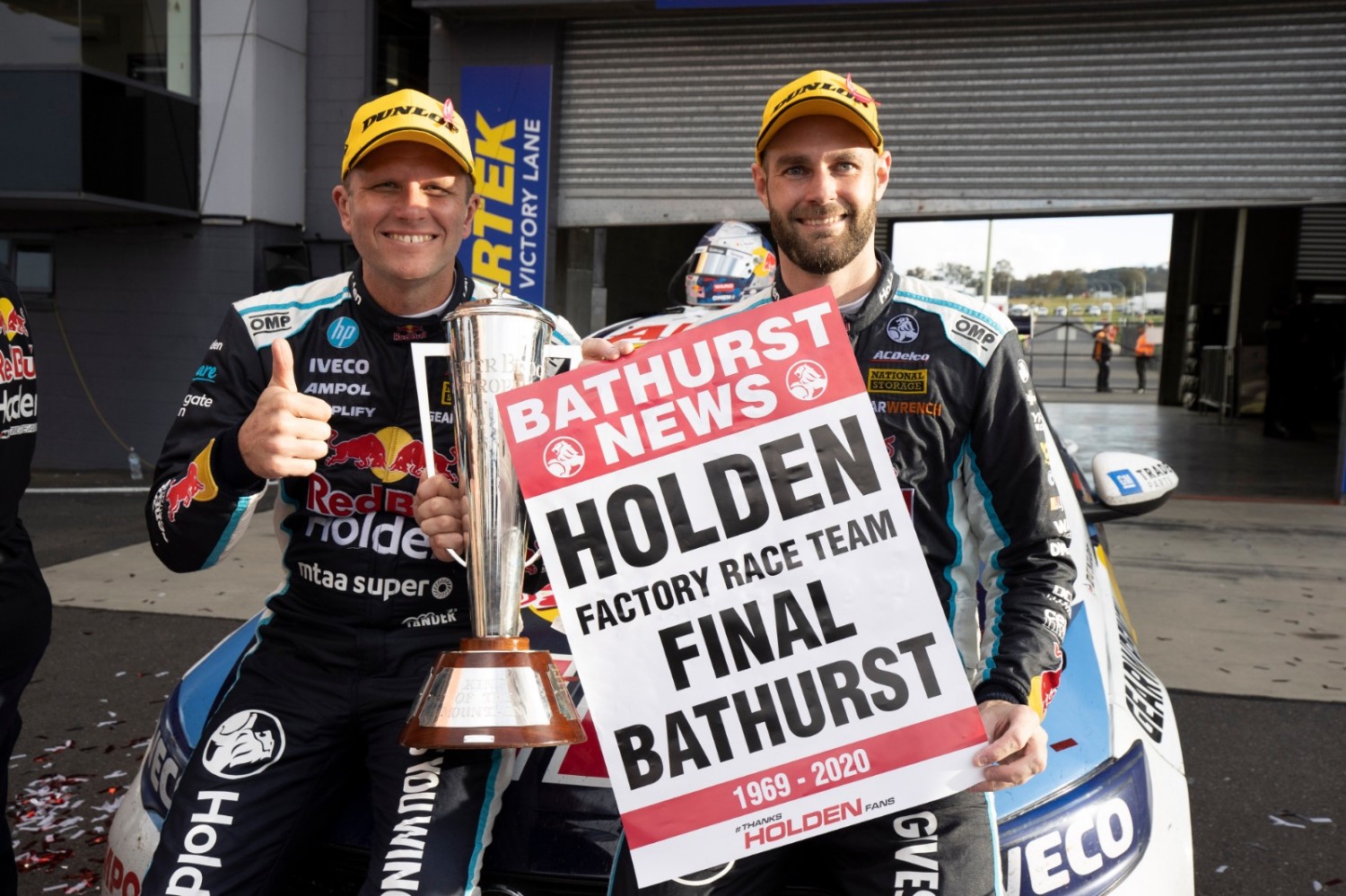 In Holden’s final ever race before the manufacturer ends its support in Australia, the Triple Eight team, the official factory team of the Red Lion in Supercars claimed an emphatic victory to round out the 2020 Virgin Australia Supercars Championship.

The win on Sunday was in front of a small crowd around a Mount Panorama circuit that is normally teeming with hundreds of thousands of spectators.

Restrictions to curb the spread of the new coronavirus limited the number of fans this year to just 4,000 per day, which is ridiculously small around such a large circuit. Spread of the virus is much more likely in an indoor environment.

Van Gisbergen put together a perfect performance on the biggest stage in Australian motorsport, to claim his maiden win at Mount Panorama on his 14th attempt and book his place in history as a Supercheap Auto Bathurst 1000 winner.

Co-driver Garth Tander was also flawless for the #97 Red Bull Holden Commodore, claiming his 4th Bathurst victory alongside one of Supercars greatest all-time drivers, who now has the sport’s holy grail, the Peter Brock Trophy in his career trophy.

The victory was the 34th for Holden at Mount Panorama, 570th Championship victory and rounded out the 40th anniversary since the Commodore first raced and won at Bathurst in 1980.

“It was just awesome,” said van Ginsbergen, who also had to contend with two safety cars in the final 10 laps while he fought off a fast-finishing Waters. “Stoked to finally win this race.

“The team did a faultless job. What a great way to send out Holden,” he added of the car which is being discontinued.

Pole sitter Cam Waters did everything he could to push van Gisbergen, but in the end the 26-year old Mildura native settled for second place in his Monster Energy Mustang alongside Will Davison.

Van Gisbergen fittingly drove his victory lap holding a Holden flag, that was handed to him by a fan after the 31-year old Kiwi stopped during his victory lap to collect it.

Joining van Gisbergen on the victory lap was fellow kiwi and 2019 Bathurst winner Scott McLaughlin. He finished 5th in today’s race in his Shell V-Power Ford and celebrated his third consecutive Supercars Championship on the victory lap.

While his future in the sport is currently uncertain for now, it was a fitting end to the #17 Shell V-power Ford Mustang driver’s 2020 campaign which included 13 race victories and 15 pole positions, putting him 4th on the all-time wins list in Supercars and 2nd on the all-time pole position winner list.

It all started on lap 33 when van Gisbergen’s teammate Jamie Whincup slammed into the concrete wall at The Cutting, ending his and Craig Lowndes afternoon early for one of the pre-race favorites.

“I was pushing hard to get through and trying to get up the road,” said Whincup, whose co-driver was seven-time winner Craig Lowndes.

“In hindsight I should have waited another lap.”

The crash dropped him to fourth in the overall championship standings with Waters moving into second and van Gisbergen to third.

A two-horse race had emerged through the back half of the 2020 Great Race, as van Gisbergen and co-driver Garth Tander battled it out with pole sitting combination Cameron Waters/Will Davison.

Just when it seemed like there would be a rare straightforward run to the flag – van Gisbergen having thwarted some Waters’ advances – the Mountain claimed a trio of rookies in the final 10 laps to bunch the field.

The Safety Car was called on lap 152 with Jack Smith beached at The Chase and Bryce Fullwood moments later crashing at The Esses.

A six-lap dash to the flag was then interrupted by Zane Goddard smashing into The Grate soon after racing resumed.

A short delay made for three final laps in anger to battle it out for the coveted Peter Brock Trophy and it was van Gisbergen who hung on, sealing the deal by twice setting the fastest lap of the race straight after the restart.

A curveball had been thrown McLaughlin’s way with the cruel timing of a Safety Car called on lap 97 for the first case of Smith’s Commodore being stricken in the gravel.

The Shell Ford #17’s co-driver Tim Slade had been on the verge of completing his minimum 54 laps for the day when the race was neutralized, forcing Slade to drive an additional stint.

In the end the race belonged to van Gisbergen and Tander who made the most of what will go down as a famous victory.

2021 will also mark the start of a new era for Supercars, with a new broadcast deal to begin next year with Fox Sports and the Seven Network.

Repco will also take over as the series’ naming rights partner from 2021-2025.