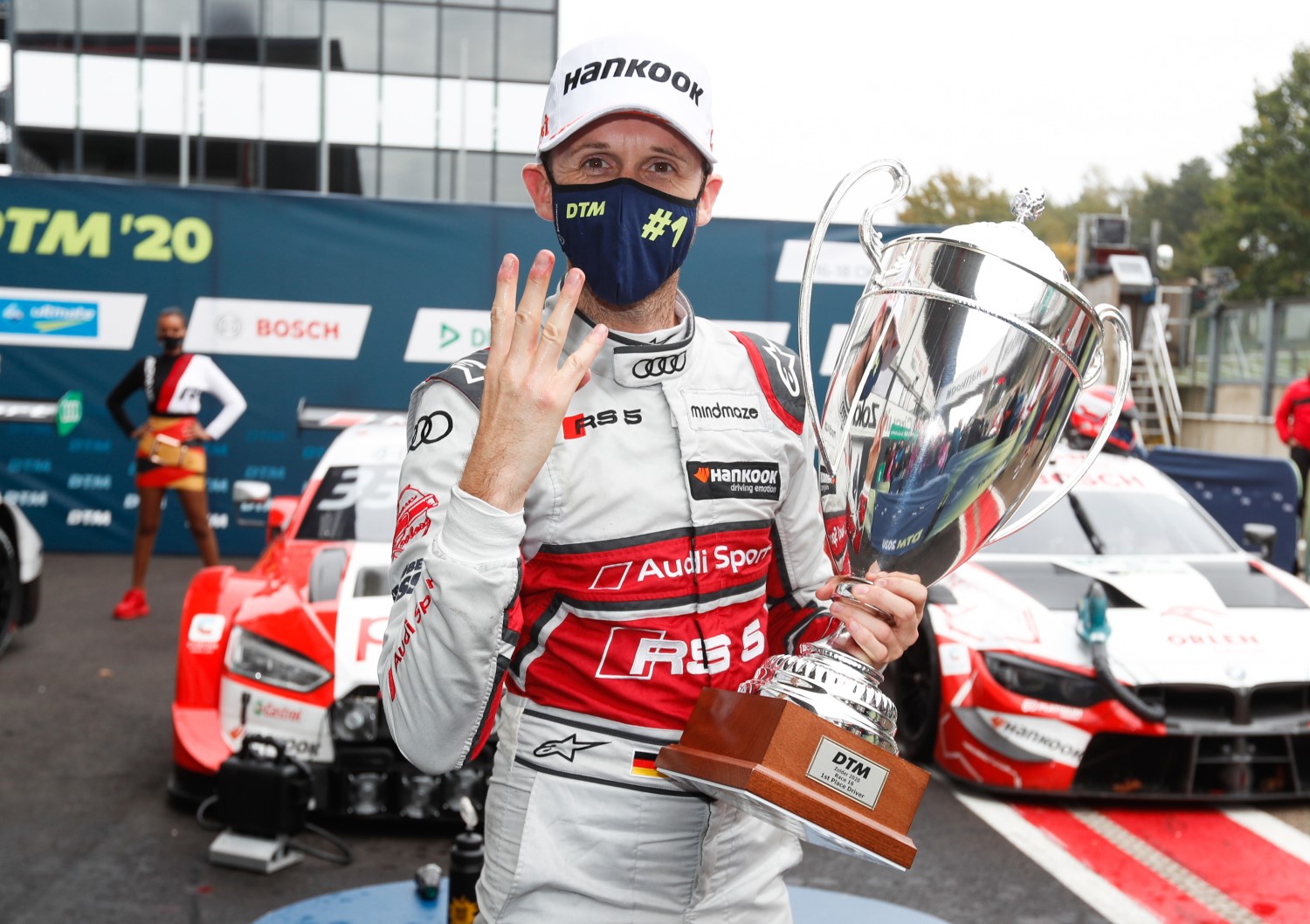 Drama until the very end, René Rast versus Nico Müller: the big showdown of the DTM at Hockenheim from 6-8 November will turn into an open duel between the defending champion from Germany and his challenger from Switzerland. Robin Frijns (NED), the third Audi driver in the circle of the title candidates, only has theoretical chances after innocently having become involved in an accident at Zolder.

The former Grand Prix circuit in Belgium provided drama in the battle for the DTM title. Since the start of the season, Müller had been leading the drivers’ standings and had an advantage of 47 points over third-placed Rast. Rast, however, conquered Zolder, won all four races on the two back-to-back weekends and turned around the tables in an unexpected, but impressive way.

Now, Rast is heading towards the traditional finale at the Motodrom in Baden-Württemberg with a margin of 19 points from Müller. For Müller, meanwhile, second place in the race on Sunday was his best result at Zolder. In the 16th of this season’s 18 races, Pole Robert Kubica sparked a surprise. By virtue of a clever strategy and entertaining overtaking maneuvers, the ex-Formula 1 driver worked his way up to finish third, his maiden podium finish in his first DTM season. In the process, Kubica also kept all the six works BMWs at bay.

A pair of safety car interventions, drama for Frijns

At the start, Müller made it already clear that he is not one to give in early in the battle for the title. The Swiss had a rocket start, opting for the middle to move up between compatriot Fabio Scherer (Audi) and Frijns, his teammate in the Audi Sport Team Abt Sportsline, from fifth to third place. At the front of the field, Ferdinand Habsburg, who had claimed a convincing maiden pole position with the privateer Audi of the WRT team, initially was in control and maintained the lead while Rast remained within striking distance in second place, waiting for his chance.

Soon after that, a heavy crash caused a stir: Jonathan Aberdein (RSA, BMW) locked up under braking and hit the rear of Scherer’s Audi. Scherer was unable to avoid a spin and also hit Frijns, who was in front of him, as he swerved. For a three drivers involved, the race was over. However, the main victim of the accident is Frijns, who, as a result of the DNF, is now 41 points down on points’ leader Rast (304) and 22 points down on Müller (285) and, with 56 points still at stake in the Hockenheim finale, only has theoretical chances.

Pole sitter Habsburg drops back with tire problems in the race

Habsburg also defended his lead from Rast after the first safety car intervention while Müller remained third. After another accident, a collision between the two BMW drivers Lucas Auer (AUT) and his compatriot Philipp Eng, the safety car came out once more. At the restart, the order in the top three again remained unchanged. That was to change after the mandatory pit stops: Rast, who had stopped one lap later than Habsburg and Müller, took the lead and gradually extended it until the finish. For Habsburg, however, things went from bad to worse: the Austrian had increasing tire problems and lost one position after another. Just before the end, the WRT team even opted for a second tire change, after which Habsburg dropped back to tenth place.

René Rast, Audi, winner
“It is unbelievable: I have won all four races at Zolder, almost scored the maximum number of points. That is totally unexpected. My start was good, but then I ran a bit wide in the first corner. The safety car was out twice, that mixed up things a bit each time. Keeping cool wasn’t easy, especially at the restarts. Ferdinand Habsburg and Nico Müller came in early for their tire changes. One lap later, we tried an over-cut that worked out. I didn’t know who was second and I tried to look into the rearview mirror in vain to find out how much I had to save my tires. I hoped that the tires would last and that was the case. It seems like I can deal slightly better with cooler temperatures, so I hope we won’t have 30 degrees for the finale at Hockenheim.”

Nico Müller, Audi, 2nd place
“The ten days here at Zolder were quite tough for me. Today, I have to be very happy with second place, that was the maximum possible. At the start, everything worked. Only after the pit stop, many cars rejoined the track right in front of me, we hadn’t expected that. I was livid in the cockpit. At this stage, I wore out my tires more than I wanted. Today, I did everything I could. Our pace wasn’t good enough to follow René Rast. Now, there will be a great showdown at Hockenheim.”

Robert Kubica, BMW, 3rd place
“I am very happy, no doubt about it. We didn’t expect this at all, but you have to take the opportunities as they come. That was the case today. Our strategy was perfect. Just in the pit stop, not everything worked perfectly, but nobody noted it: the lollipop didn’t go up, so at a certain point, I just drove off. Otherwise, I would still be standing there. Then, I had Nico Müller in front of me and was slightly faster at that stage, but at the end, it was more important to manage the tires and bring third place home. This is a big moment for us, for the entire team. I am a DTM rookie, the team is new as well and the season was difficult so far. I am really overjoyed.”