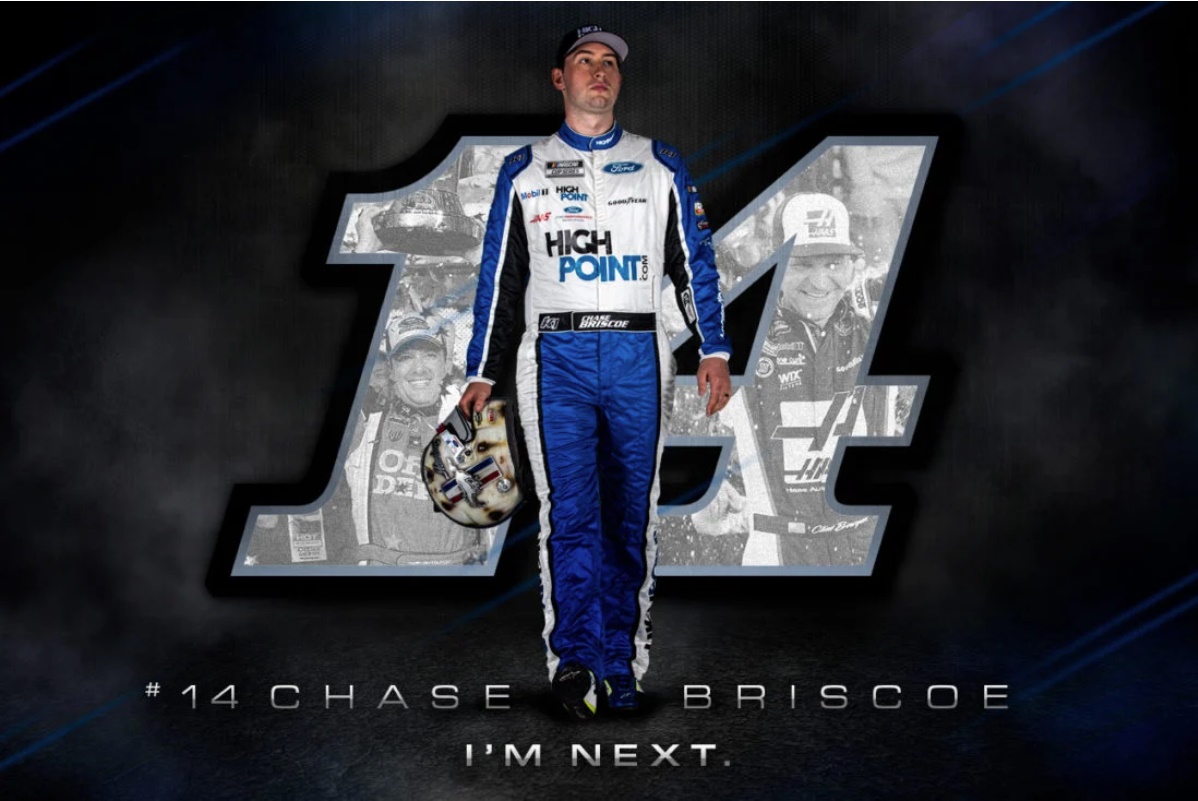 Tony Stewart has promoted Chase Briscoe to the Cup Series for 2021, as it was announced on Tuesday that the 25-year-old is set to replace Clint Bowyer in the No. 14 at Stewart-Haas Racing. Briscoe currently drives the No. 98 for Stewart in the Xfinity Series. where he’s amassed nine wins and is currently competing for a championship.

The position became available once Bowyer announced that he’d be retiring at the end of the season to pursue a career in TV broadcasting. Briscoe said that Stewart called him months prior to Bowyer’s retirement to let him know that eventually the No. 14 would be his.

“I knew that Clint was obviously in a contract year and it was going to be his decision whether to come back or not,” Briscoe said after signing the deal. “I was confident but I didn’t think it was going to happen this coming year.”

HighPoint, a leading customer service and technology solutions company, joined Briscoe in late 2019 as a primary partner of his No. 98 Ford Mustang in the Xfinity Series. It provided a breakthrough opportunity for Briscoe’s career, and the company has stepped up again in 2020, serving as the anchor partner of SHR’s No. 14 team and enabling Briscoe’s promotion to the elite NASCAR Cup Series.

“Chase has to be one of the most humble and grateful guys in the sport and he has worked incredibly hard for this opportunity. We’re extremely proud to be a part of his journey from Xfinity to Cup,” said Mike Mendiburu, President and CEO of HighPoint. “Everyone has seen his talent and he has combined it with incredible humility and an unrelenting work ethic. Simply put, performance without character is not important to us. Chase, however, has both in spades. It’s why he’s ready for the NASCAR Cup Series and why we are so honored to support him.”

Briscoe has a chance to add the 2020 Xfinity Series title to his resume. The 25-year-old racer from Mitchell, Indiana, enjoys a strong position in the NASCAR Playoffs by leading the championship standings with a series-best nine wins with only three races remaining.

“Chase has worked incredibly hard to make his mark in NASCAR and has earned this promotion to the NASCAR Cup Series. Thanks to HighPoint and Ford, we were able to make it happen,” said Tony Stewart, co-owner of SHR with Haas Automation founder Gene Haas. “Without Ford seeing him early on and recognizing his talent and HighPoint backing his efforts in Xfinity and now Cup, we wouldn’t have had the opportunity to bring him into our system. Since we’ve gotten together with Ford and HighPoint, we’ve been able to do great things with Chase and I feel there are more great things ahead of us.”

Briscoe is in the midst of his second straight playoff appearance. He finished fifth in the Xfinity Series standings last year, narrowly missing out on advancing to the Championship 4 and competing for the series title. He did, however, win the rookie-of-the-year award.

The 2020 season marks the first time in Briscoe’s NASCAR career that he has been able to return to the same team, in the same series with the same personnel in back-to-back years.

“In the final three races last season, we saw a confidence in Chase that we hadn’t seen before,” Stewart said. “There was a transformation, and I think those three races last year were a preview of what we were going to see this year. He’s delivered time and time again this season and he’s definitely ready for the NASCAR Cup Series.”

Briscoe has made the most of the opportunity afforded to him at SHR. In addition to his nine wins, Briscoe has led 957 laps, which is 760 more laps than he led last year, and his 16 top-fives in 30 starts this season eclipses his entire top-five tally from his 2018 and 2019 seasons combined, where he made a total of 50 starts.

“Wins are my benchmark, and Chase has done a lot of winning this year,” Haas said. “His stats alone merit his place in Cup, but Chase has also proven to be a strong ambassador for our partners who appreciate his grit and determination.”

Briscoe is a third-generation racer whose career began on dirt tracks in and around his home state of Indiana.

“I raced with Chase’s dad in USAC sprint cars and in non-wing cars, so to see Chase come up through the ranks like I did brings back memories,” Stewart said. “When it comes to the 14 car, I obviously have a passion for having dirt drivers behind the wheel. Having had Clint Bowyer in the car and now Chase, it’s special, but also practical. With the lower horsepower package they have in the Cup Series, you have to run these cars a lot freer, and I think that suits a driver with a dirt background. Chase is a guy who would much rather have a loose racecar versus a very tight racecar that won’t turn. I always felt better in a Cup car than I did in an Xfinity Series car, and I think he’ll be in the same position.”

Since he was 13, Briscoe has followed in his grandfather’s and father’s footsteps, racing sprint cars on the rough and tumble bullrings of the Midwest. It is a lineage that makes Briscoe a natural fit for SHR, as co-owner Stewart is an Indiana native who also began his career on dirt and despite massive success in multiple racing series that includes three NASCAR Cup Series championships, remains true to his dirt-track roots by continually racing sprint cars.

“Growing up in Indiana and racing sprint cars, the guy I always looked up to was Tony Stewart. To be able to drive for him is a dream come true,” Briscoe said. “Tony and Gene have built something really special in Stewart-Haas Racing. Being a part of it in the Xfinity Series and now, the NASCAR Cup Series, has always been my goal. HighPoint and Ford created this opportunity, and my parents, my wife, and Briggs and Beth Cunningham, helped position me for this opportunity. Their support means everything, and it’s all the fuel I need to compete at the Cup level.”

Briscoe’s first time behind the wheel of a racecar came in 2001. Driving a quarter midget, he won his first heat race and then won the feature event later that evening. Briscoe moved on to mini sprints and when he was 13, stepped into a 410 sprint car where, in his first race, he finished 10th in a 40-car field. In a rookie season that saw 37 starts, Briscoe racked up eight top-five and 17 top-10 finishes, including a win in the last race of the season, where he broke NASCAR Hall of Famer and four-time NASCAR Cup Series champion Jeff Gordon’s record as being the youngest person to win a 410 sprint car race.

Briscoe continued to race 410 sprint cars in the Midwest region and people began to take notice. Soon, the switch from sprint cars to stock cars was on. Cunningham Motorsports hired Briscoe in 2016 to pilot its No. 77 Ford for a full-time drive in ARCA. Briscoe responded by winning six races and the championship by a whopping 535 points.

Briscoe has thrived in his transition to NASCAR, which was boosted by that ARCA title. He advanced to the NASCAR Gander RV & Outdoors Truck Series in 2017, earning four poles and winning the season-ending Ford EcoBoost 200 at Homestead-Miami Speedway. His 10 top-five and 14 top-10s allowed Briscoe to make the playoffs, finish sixth in points and score the series’ rookie-of-the-year and most-popular-driver awards.

Briscoe parlayed a limited Xfinity Series schedule in 2018 where he drove for both SHR and Roush-Fenway Racing into a full-time drive in 2019 for SHR. Following two full seasons in the Xfinity Series, Briscoe will grab the top rung of the racing ladder when he makes his NASCAR Cup Series debut in the 63rd Daytona 500 Feb. 14 at Daytona (Fla.) International Speedway.