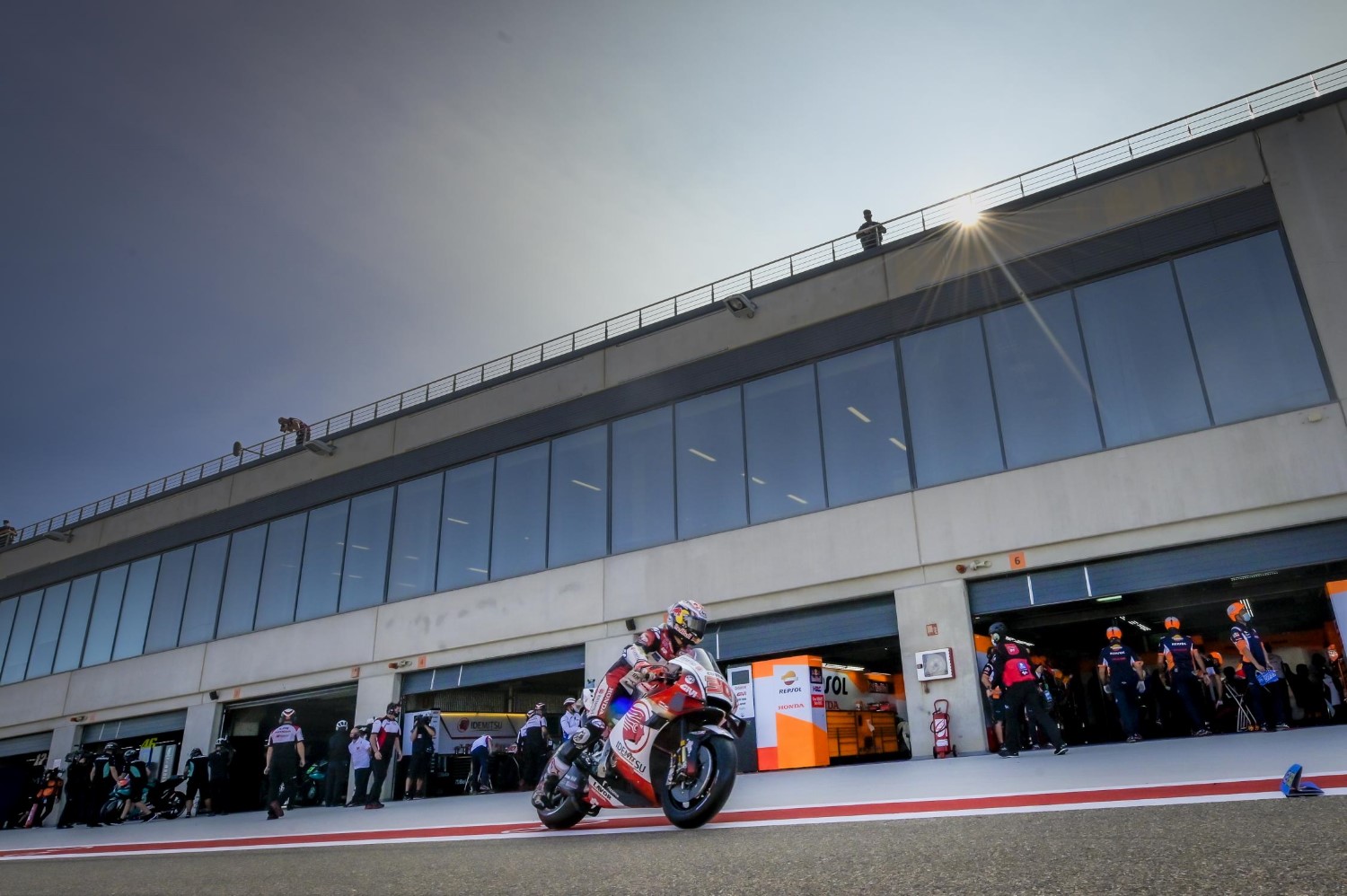 LCR Honda rider Takaaki Nakagami has won his first MotoGP pole position during qualifying for the Teruel MotoGP, the second of the back-to-back Aragon rounds.

Franco Morbidelli and last Sunday’s winner Alex Rins will join him on the front row of the grid.

Maverick Vinales was best of the title top-four in fourth place, with Fabio Quartararo sixth and championship leader Joan Mir only 12th.

Ahead of an almighty Q2 showdown, a monumental Q1 took place for title chaser Dovizioso. Seeking the help of Jack Miller (Pramac Racing) on his second run, the Italian couldn’t find a way into the top two – and in the end, neither could the Australian. Pol Espargaro’s (Red Bull KTM Factory Racing) effort and a very late flying lap from Johann Zarco (Esponsorama Racing) saw Miller get shoved out of the top two, with Dovizioso only managing 7th in the session, which means a P17 slot on the grid. A huge blow for Dovizioso’s title chances.

Q2 then clicked into gear and it was Rins who set the first flying lap, but it was only a banker lap. Nakagami soon found himself at the top of the pile ahead of Miguel Oliveira (Red Bull KTM Tech3) and Zarco, before Viñales was the first man to get into the 1:47s. A 1:47.908 was the Spaniard’s lap but that was then beaten by Rins, a 1:47.593 was the Aragon GP race winner’s lap as Oliveira went P2, with Iker Lecuona (Red Bull KTM Tech3) shooting to P2.

It was all change though. Nakagami was back at the summit with a 1:47.072 as Zarco flew into P2, that was until Morbidelli went within a tenth of Nakagami to grab second place. Rins then improved again but it was only good enough for P5, with his teammate Mir struggling in the opening exchanges of Q2 – the Championship leader was P12, closest contender Quartararo was P4. As the riders piled into the pitlane, Nakagami led the way by 0.046 from Morbidelli as Zarco completed the provisional front row.

A huge five minutes were coming up for the riders. Mir was 4.5 seconds off after failing to set a competitive lap time on his opening run, Aragon GP podium finisher Alex Marquez (Repsol Honda Team) was P11 and Viñales was 7th. The rear soft tires were slotted in, and so much was at stake.

Heading onto his flying lap, Quartararo was well out of shape coming over the brow of the hill. With two minutes to go, everyone was setting gray sector times for the time being. No one was going quicker as Mir had a one-lap shot at picking up places from P12. Pol Espargaro found time in Sector 2 and was on a personal best time, Viñales had also found time with Nakagami once again up – 0.239 faster in Sector 3! Coming across the line, Nakagami set a phenomenal 1:46.882 to move the goalposts significantly.

Quartararo was threatening the time though. Ahead on the road was his title rival but Mir, despite improving his time, couldn’t jump up the time screens. P12 was as good as it would get for Mir but would Quartararo capitalize? Another wobble coming onto the front straight saw Quartararo go P5 and just behind the Frenchman, Rins launched to P3. On his last lap, Viñales went quicker but it wasn’t enough for the front row, P4 for the Spaniard and that was all she wrote in a belting Q2 session in Teruel.

After a mighty fine weekend to date, Nakagami becomes the sixth polesitter of 2020 and puts himself right in the hunt to become the ninth different winner of the season. Japan’s wait for a premier class pole position is over, now can Nakagami repeat Tamada’s feat in Valencia and win from pole? Morbidelli was the HRC rider’s closest challenger in qualifying and is the only other rider to set a sub-1:47, that’s the Italian’s fourth front row start of the season. Rins shadowed Quartararo in Q2 and subsequently, the most recent race winner secures his first front row start since Assen 2019.

Viñales will spearhead Row 2 in P4 ahead of Q1 graduate Zarco – who suffered a late crash – and Yamaha rival Quartararo. It’s not often you see Viñales and Quartararo off the front row, neither fully capitalizing on Mir’s disastrous qualifying. Incidentally, this is only the second time in the last 18 rounds that El Diablo has qualified lower than third. Crutchlow heads the third row in P7 and misses out on Row 2 by less than a tenth, the British rider is joined by two KTMs on the third row in the form of Oliveira and Pol Espargaro. Alex Marquez claimed P10, one better than his Aragon GP Q2 performance – and we all know what happened last Sunday. The number 73 picks up his best MotoGP qualifying result to lead Lecuona and Mir from the fourth row.

Mir ended the session 0.760 away from Nakagami and has plenty of work to do if he’s to challenge for his first win of the season. Not the afternoon the Spaniard would have wanted but none of the main title contenders are on the front row. With Dovizioso P17, riders like Nakagami, Morbidelli and Rins have a wonderful opportunity to get themselves into the Championship frame on Sunday afternoon.