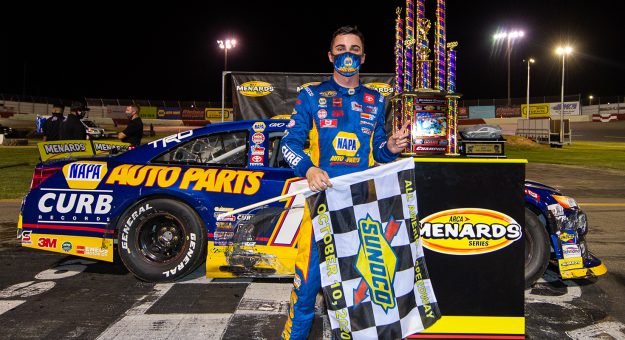 Gio Scelzi figured he had not been aggressive enough in his eight ARCA Menards Series West starts prior to Friday night’s NAPA Auto Parts 125 presented by CashInTheCan.com.

The 18-year-old from Fresno, California, certainly made up for his perceived shortcomings on the last lap at All American Speedway in Roseville, California.

Coming to the white flag, Scelzi saw what he described as a “bobble” from then-race leader Taylor Gray, and the driver of the No. 16 NAPA Auto Parts / Curb Records Toyota took advantage. Scelzi drove underneath and wrestled the lead away from Gray crossing the stripe, a move that sent the No. 17 Ford Performance Ford spinning and sent Scelzi to Victory Lane.

“I had such a good car the whole time,” said Scelzi, a rookie who picked up his first ARCA Menards win in his ninth West start. “I can’t thank my guys enough. I’ve never had a car where I could run guys down and pass them like that. It was unreal.

“I knew [Gray] was struggling. I didn’t pass him on the outside; I didn’t know if I was going to be able to get him. And then he bobbled there, and I just, you know, kind of slammed through the door.”

Gray, who started Friday night’s race up front after earning the General Tire Pole Award in qualifying, finished seventh after leading 116 of 125 laps on the 0.333-mile oval. The 15-year-old DGR-Crosley driver was making his third ARCA Menards Series West start of the season and had never competed at All American.