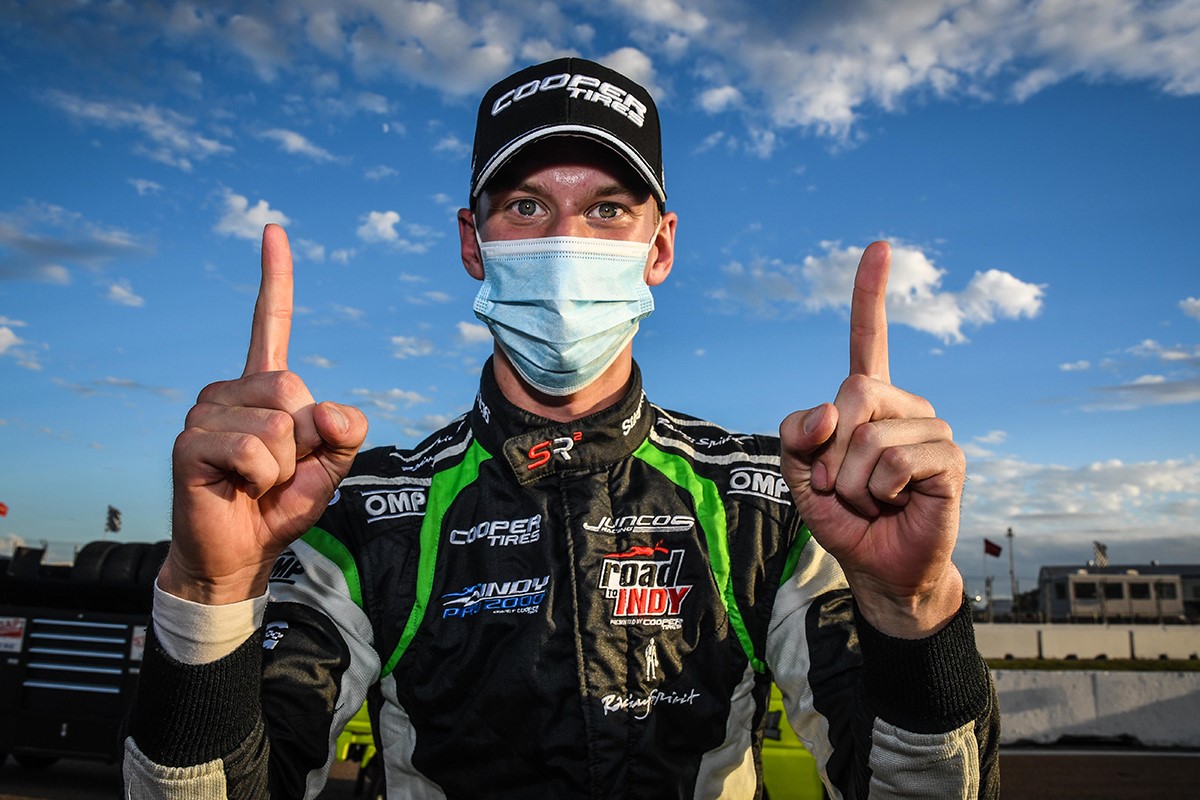 Sting Ray Robb tied up the Indy Pro 2000 Championship Presented by Cooper Tires earlier this month at New Jersey Motorsports Park and added another string to his bow with an emphatic performance in today’s Indy Pro 2000 Grand Prix of St. Petersburg Presented by Cooper Tires. Robb, from Payette, Idaho, led every inch of the way on the demanding street circuit and capped it all by establishing a new lap record on the 25th and final lap of the race.

Singapore’s Danial Frost profited from the misfortune of Parker Thompson (DEForce Racing) by finishing second for Turn 3 Motorsport. Robb’s Juncos Racing teammate, Artem Petrov, from “the other” Saint Petersburg, in Russia, completed the podium in third.

Robb laid the groundwork for his excellent day by claiming his fourth Cooper Tires Pole Award of the year in qualifying yesterday afternoon. He immediately translated that into the lead of the race, stamping his mark on the proceedings right from the start as he completed the first lap a full 1.2 seconds clear of Thompson, who had started third but managed to find a way past Frost at the first corner.

As Robb steadily increased his lead, the main focus was on the battle for second. Thompson remained under intense pressure from Frost, only for his efforts to go unrewarded when a mechanical problem forced him to pull forlornly into the pits after 10 laps.

Once released into second place, Frost halved the deficit to Robb from almost four seconds with five laps remaining, briefly holding a new lap record before Robb responded to maintain his advantage. The eventual margin of victory was a relatively comfortable 1.9774 seconds.

Petrov’s hold on third place appeared to come under threat from New Zealander Hunter McElrea (Pabst Racing) during the middle phase of the race, only for the Russian to increase the tempo and edge clear before the finish.

Mexico’s Manuel Sulaiman took sixth for DEForce Racing after holding off a race-long challenge from Sweden’s Rasmus Lindh, who made an impressive return to the series with Turn 3 Motorsport after finishing second in the 2019 title-chase behind Kyle Kirkwood. Colin Kaminsky (Pabst Racing), from Homer Glen, Ill., also was part of this battle before indulging in a quick spin with five laps remaining. Kaminsky rejoined to finish ninth behind Mexican Moises de la Vara, who claimed his second Tilton Hard Charger Award of the season after rising from 10th on the grid.

Victory for Robb ensured Ricardo Juncos of his ninth PFC Award of the year as the winning team owner. He will go into tomorrow’s final race of the season with high hopes for another one, too, following another impressive effort by Robb during the second qualifying session this morning, which also netted him a new qualifying lap record.

Sting Ray Robb (#2 Firehouse-Goodheart Animal Health Centers-Juncos Racing Tatuus PM-18): “That was a hard race, even though I was leading the whole way. The team set a goal for me to hold a certain lap time and I did, until I saw Danial starting to catch me. I started pushing harder and set the quick race lap time, bettering my own race record from last year. Two lap records in one day here, that’s pretty special! Huge thanks to the team, I don’t know what more I can say that I haven’t said all year. They are so amazing. And I’m so happy to have so many of my friends and family here. They get to see me on the top of the podium, and I get to share it with them. And the glory goes to God, as always.”

Danial Frost (#68 DEN-JET Turn 3 Motorsport Tatuus PM18): “It’s been strange, being here in an Indy Lights car last March and now back here in the Indy Pro 2000 car, but I’m so glad to be racing here again. St. Pete is one of my favorite races on the calendar. It’s such a challenging track. It’s so physical and you really have to stay focused, so it’s mentally difficult as you get toward the end of the race, but I like that kind of attack. It’s nice to get the podium, but I want to get the next spot! I have one more chance tomorrow to get that race win.” 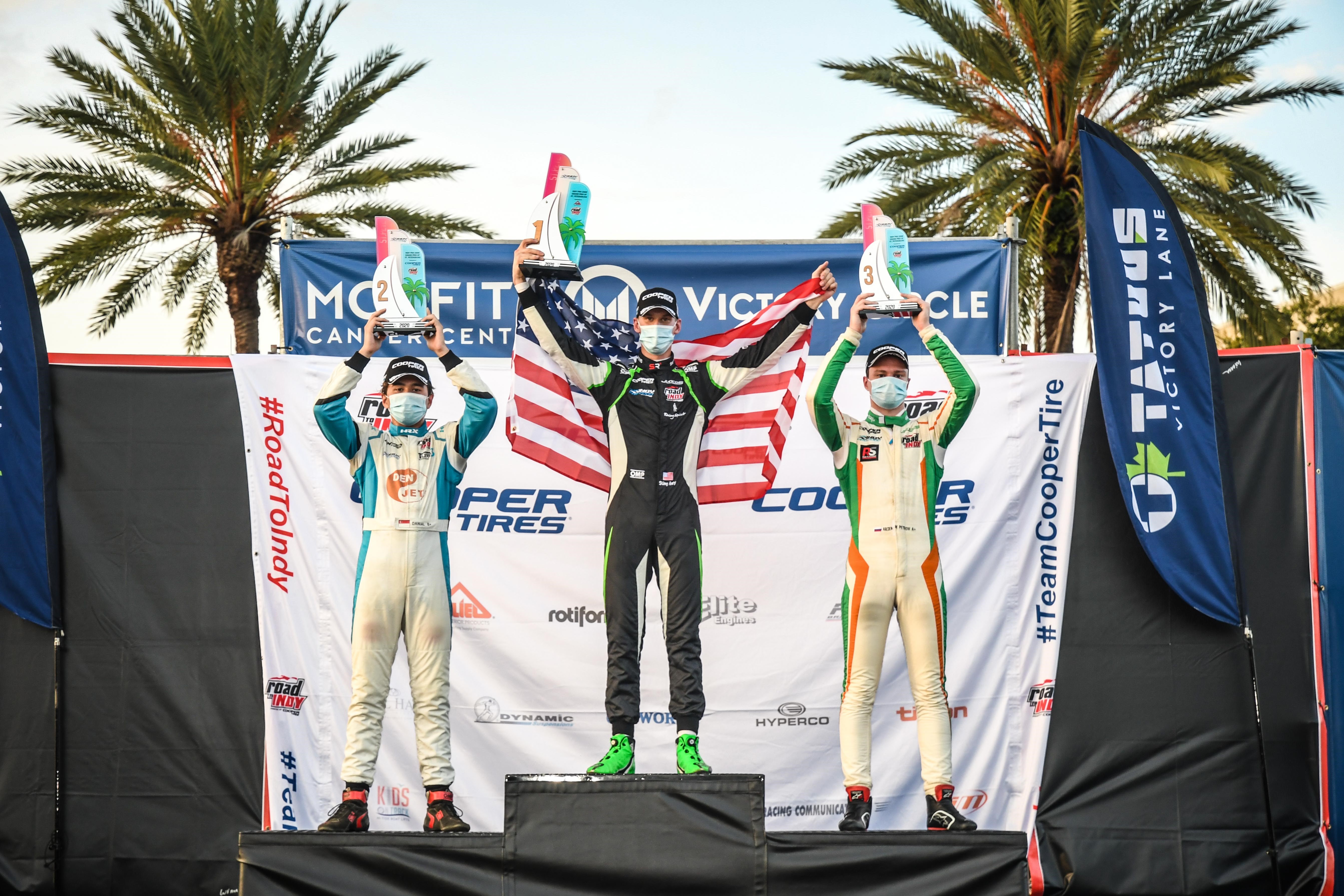 Artem Petrov (#42 Road To Success/Bell/226ers-Juncos Racing Tatuus PM-18): “That was a pretty hard and tough race. It was only my third street course; we don’t really do them in Europe. But I really do enjoy this track. I had a good start, getting up to fourth, then into third when Thompson had his issue. I couldn’t get close to Danial and Sting Ray, though, so hopefully we’ll have another shot tomorrow.”