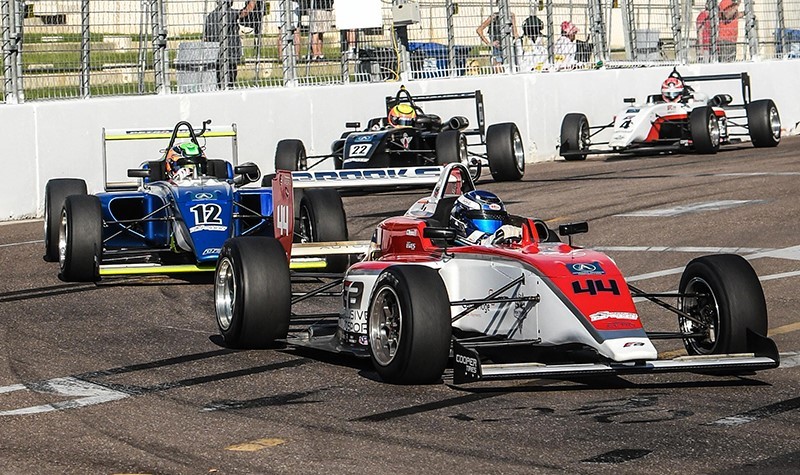 Christian Brooks has made tremendous progress throughout his rookie Cooper Tires USF2000 Championship campaign with the Exclusive Autosport team. Today in the USF2000 Grand Prix of St. Petersburg Presented by Cooper Tires, Brooks led confidently throughout the 20-lap season finale to secure a hard-earned maiden victory.

Yesterday’s winner, fellow rookie Kiko Porto (DEForce Racing), from Recife, Brazil, capped an excellent weekend by finishing second ahead of countryman and close friend Eduardo Barrichello (Pabst Racing), for whom a ninth podium finish of the season was enough to clinch second place in the championship.

Brooks took full use of that hard-won advantage by leading the field into Turn One at the start, with fellow front row starter Porto in hot pursuit.

Barrichello made up one position to follow in third ahead of already-crowned champion Christian Rasmussen (Jay Howard Driver Development), from Copenhagen, Denmark, and Michael d’Orlando (Cape Motorsports), from Hartsdale, N.Y., who made a bold move from eighth on the grid. Next up were Australian Cameron Shields (DEForce Racing) and Reece Gold (Cape Motorsports), from Miami, Fla., who needed to finish ahead of Barrichello to keep alive his hopes of finishing second in the final championship points table.

Aside from d’Orlando forging past Rasmussen for fourth place on Lap Two, the leading positions remained unchanged until the race was neutralized by the Pace Car after the unfortunate Shields ground to a halt – for the second time in as many days – after eight laps.

Brooks maintained his advantage at the restart, and even though Porto never gave him any respite, Brooks held on confidently to take a narrow victory. Porto had to be content with second, although he also took home The Ticket Clinic Fastest Lap Award after posting a new USF2000 race lap record with a best of 1:12.2279, an average speed of 89.716 mph.

Fourth place was taken by d’Orlando, who earn the Tilton Hard Charger Award as he remained narrowly ahead of Rasmussen. Englishman Matt Round-Garrido rounded out the top six for Pabst Racing.

Brooks also secured the season’s Hyperco Rookie of the Year honors, which will be acknowledged in an abbreviated awards ceremony to be held trackside at the Mahaffey Theater later this evening.

Christian Brooks (#44 Hot Wheels/Chaco Flato/Bell Helmets-Exclusive Autosport Tatuus USF-17): “I couldn’t hear anything on the radio over my tears after the checkered flag! I’ve never felt this happy in my life; I’m so glad we could get it done in the finale where it all mattered. To finally get it done takes all the pressure off my shoulders. But on a track like St. Pete, you’re on the edge at all times, and with Kiko so close behind I had to keep calm. I knew I had just enough pace to stay in front without being challenged. I can’t thank the Exclusive Autosport guys enough, especially given how we started the year – it shows all the work we’ve put in. I wouldn’t be here without Michael Duncalfe. It’s been an unreal year.”

Kiko Porto (#12 Banco Daycoval/Petromega-DEForce Racing Tatuus USF-17): “It’s difficult here, with the aero wash, to get close because you are on the limits. Sometimes I could catch him, but I was not close enough. But it’s a good way to end the season with a win and a second-place finish after a very difficult year. Thank you to my family, my sponsors and to the whole DEForce team. We’ve worked so hard this year and I’m so happy with the finale and the championship. I’m ready to start on 2021.” 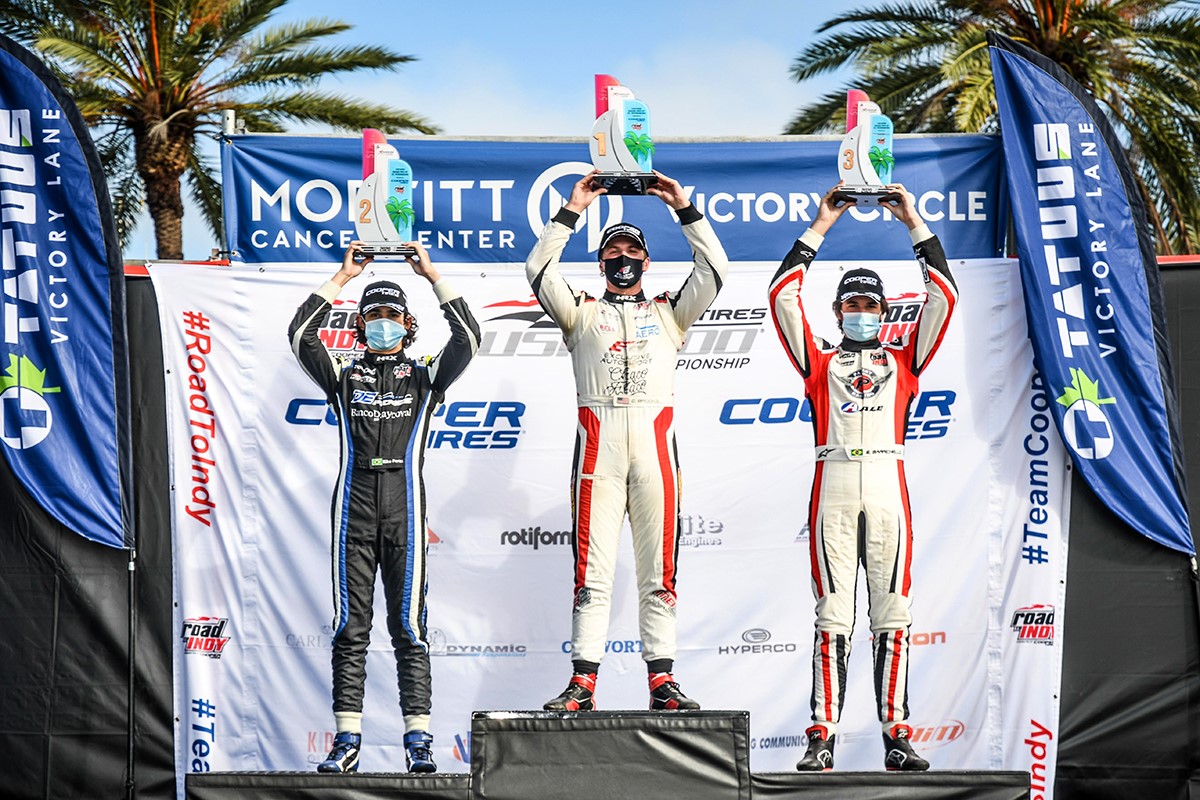 Eduardo Barrichello (#22 Ale-Pabst Racing Tatuus USF-17): “The aero wash is not big here, but it’s enough that it affects the car and on the street courses, you just can’t make a mistake. When you get close, you understeer and the wall starts coming closer and closer. For the championship, I only had to finish ahead of Reece so once I was in third, I just settled down. I thought they would battle more, I thought Kiko had more pace, but once you’re behind it’s hard to do anything. We’re happy to be Vice Champions, even though that’s not what we’re here for, but after the up-and-down year we’ve had, we’ll take it.”