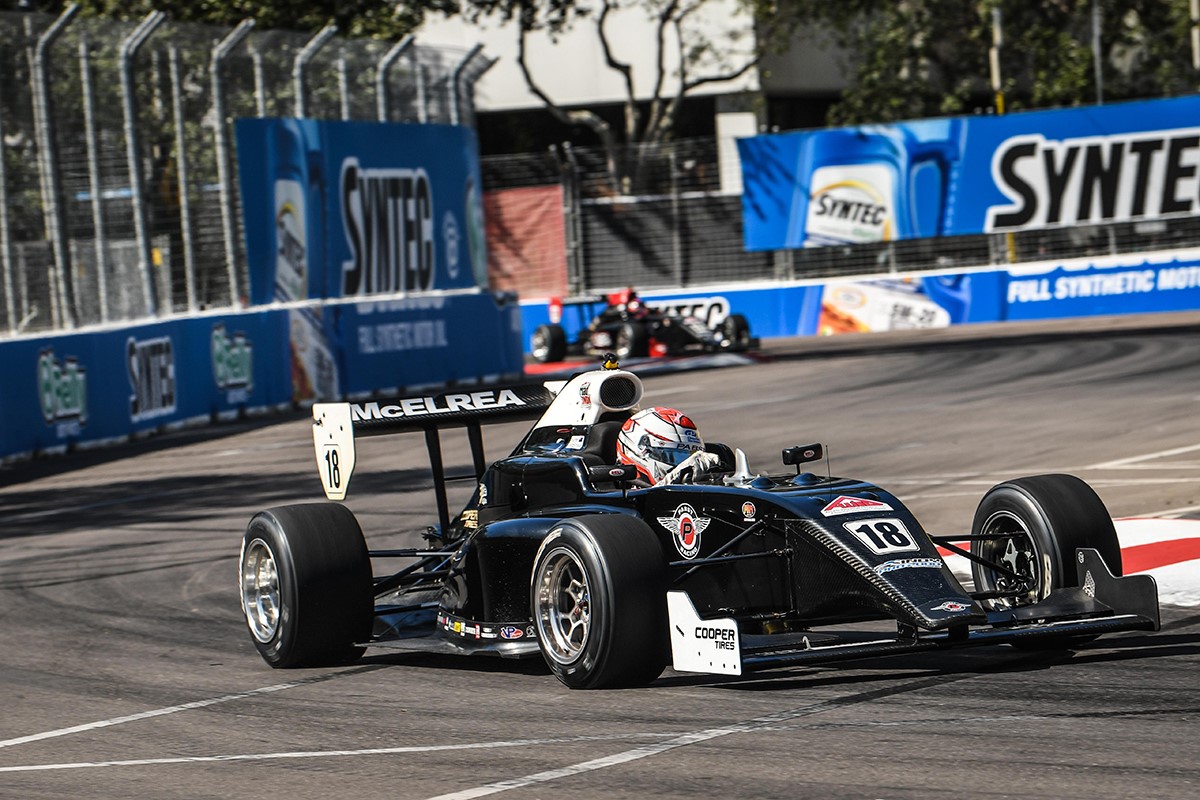 Hunter McElrea left his best until last during his rookie season in the Indy Pro 2000 Championship Presented by Cooper Tires. After taking five podium finishes, the New Zealander took full advantage of a rare error by series champion Sting Ray Robb, then pounced upon Pabst Racing teammate Colin Kaminsky to take the lead in opportunistic style during today’s Indy Pro 2000 Grand Prix of St. Petersburg Presented by Allied Building Products. McElrea held off an intense challenge from Kaminsky, who equaled his career-best finish, to win by just 0.6253 of a second.

Robb had started today’s 17th and final round of the season just as he finished yesterday – at the front after securing his fifth Cooper Tires Pole Award of the year in qualifying yesterday with a new lap record of 1:07.6015, an average speed of 95.856 mph.

But unlike yesterday, he was unable to break clear of his pursuers due to an immediate full-course caution occasioned when Nate Aranda (Juncos Racing), from Albuquerque, N.M., inadvertently started a chain-reaction incident in Turn One which ended the day for the unfortunate Canadian Parker Thompson and Mexican DEForce Racing teammate Moises de la Vara.

Robb continued to lead at the restart, only to surprisingly leave his braking a fraction too late for Turn One, sliding wide and opening the door for Kaminsky, who had started second, and teammate McElrea to sweep through.

Kaminsky, from Homer Glen, Ill., drifted a little wide at Turn Two with his Cooper tires not yet up to full operating temperature, just glancing one of the omnipresent walls and losing a little momentum as the leaders sped onto the following straightaway. McElrea saw his opportunity and dived to the inside under braking for Turn Four. For a brief moment it looked as though the two teammates had made contact, but they emerged unscathed, albeit with McElrea now in front.

McElrea, who finished second in last year’s Cooper Tires USF2000 Championship, soon began to inch clear of Kaminsky, but not for long as Kaminsky upped his pace and began to reel in his teammate once more. They were rarely separated by more than a few car lengths throughout the final 10 laps, but McElrea had done enough to take the victory.

Kaminsky followed home in second to ensure an emotional one-two punch for team owner Augie Pabst, who joyously claimed his first Indy Pro 2000 PFC Award to add to the hat-trick of USF2000 Team Championship titles he had won in 2017, ’18 and ’19.

Frost also remained close behind in third for almost the entire 25-lap distance, while Sweden’s Rasmus Lindh capped an impressive return to the Indy Pro 2000 Championship with a strong fourth-place finish. Robb recovered to take fifth, well clear of Italian-Canadian Devlin DeFrancesco (Andretti Steinbrenner Autosport), who spent most of the race bottled up behind Russian Artem Petrov (Juncos Racing). So staunch was Petrov’s defense, indeed, that he was penalized by the Race Stewards and instructed to allow DeFrancesco to move ahead. Shortly afterward, Petrov’s eventful race ended in the pit lane following a couple of scrapes with the wall.

The day might not have ended in the way Robb had hoped and anticipated, but the 19-year-old undoubtedly will feel a lot better this evening when he accepts the lion’s share of the scholarships and prizes valued at $609,245 during the traditional, but now abbreviated, awards ceremony this evening at the Mahaffey Theater.

Hunter McElrea (#18 Giltrap Group/Miles Advisory Partners/Doric NZ/Bell-Pabst Racing Tatuus PM-18): “I can’t even explain how tough this year has been, so to end it like this is so good. It’s been the toughest year of my career. It’s been all kinds of little things, constantly grinding, you think it’s your weekend and something out of your control happens to knock you down. I kept resetting, believed in myself and the team, and just did what I needed to do – and today, we did it. I felt so comfortable in the lead – I led so many laps last year and this year, I’ve been third and second, so close to a win. I maintained the gap to Colin and put the hammer down to take the checkered. There was so much screaming on the radio! We’ve ended up fifth in the championship, but this series was pretty much Indy Pro 2000 and Indy Lights combined. The competition was so tough for a rookie team, so to take a win and fifth in the championship in what I believe is the toughest field in the history of this series, I’m proud of what we did.”

Colin Kaminsky (#19 Slick Locks-Pabst Racing Tatuus PM-18): “Sting Ray got loose off (Turn) 14 on the restart and I got just a little bit better run that forced him to out brake himself into Turn One and I was able to use the rubber on the outside to get by. But in the process, I overshot Turn Two and touched the outside wall, so I was a bit of a wounded duck and Hunter was able to get by. I wanted to win but given the relationship Hunter and I have, and the whole team has, it couldn’t make me happier not to win today. It hurt for a second, after crossing the line, but to see Augie in tears was really cool. You couldn’t ask for a better way to finish out the year. To get our first pole in the series, our first podium, and now our first win, our heads are a bit higher than they were last year.” 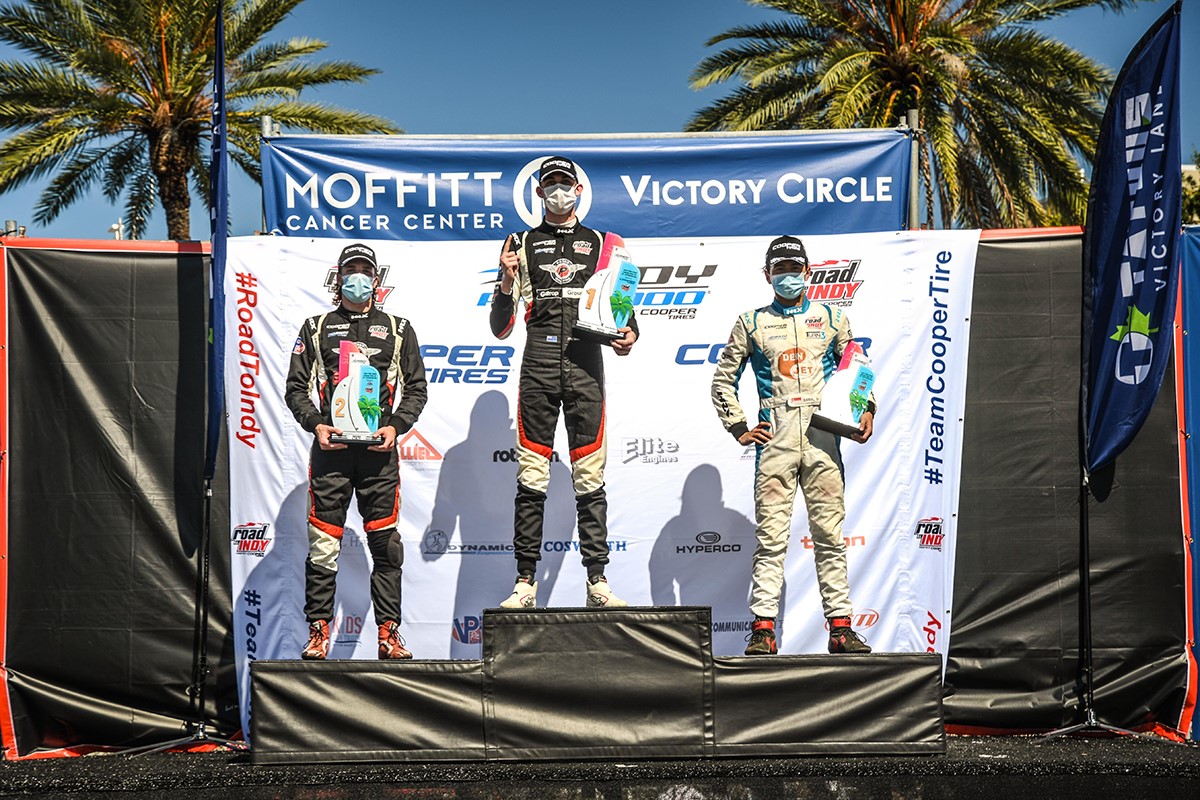 Danial Frost (#68 DEN-JET Turn 3 Motorsport Tatuus PM18): “My goal today was to be in front of Artem and Devlin and we have done that in both races, and it’s paid off in the championship. After the tough season we’ve had, I’m super happy to be third in the championship with a strong run in the final race weekend. I’m really proud of the team that we were able to cap the season off like this. I had the raw pace but I got stuck in traffic at the race start, so I really had to go for it on the restart, and it paid off. But as soon as testing starts, I’ll be back in an Indy Lights car.”