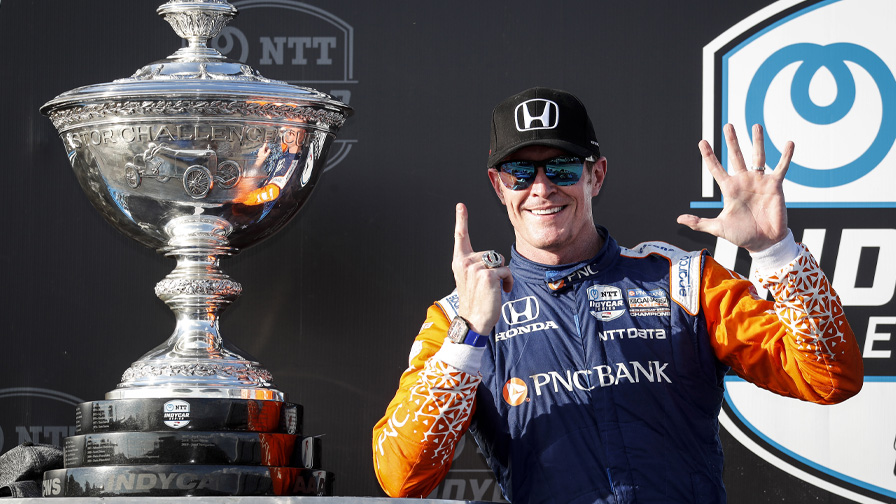 Honda today claimed its ninth INDYCAR Manufacturers’ Championship – and third consecutive title – as Scott Dixon scored the 15th podium finish for the company this season and succeeded in earning his sixth Drivers’ title, highest among all active drivers and trailing only the legendary A.J. Foyt in career championships won.

Today’s 100-lap season finale took place in hot and very humid conditions, resulting in a brief, light rain shower with approximately 20 laps remaining. Pole qualifier Will Power led the opening five laps, but was soon passed by Andretti Autosport’s Alexander Rossi, who went on to lead a race-high 61 laps before ending his day with wall contact on Lap 74.

Other Honda-powered race leaders included Colton Herta, Graham Rahal, James Hinchcliffe and Alex Palou. But shortly after Rossi’s crash, Herta also slid off course, leading to an 11th-place finish. Just moments later, Hinchcliffe was the next to fall victim to the tricky conditions, spinning in the final turn and then colliding with fellow Honda driver Jack Harvey as he attempted to rejoin the circuit. Both would have to pit for repairs, dropping them out of the lead pack. Palou’s fuel gamble came up this a few laps shy of a podium finish, as his late stop for a splash dropped him to 13th at the checkers.

Meanwhile, after starting 11th – and needing only a top-10 finish to clinch the title – Dixon methodically worked his way to the front, moving into third on Lap 80. Combined with four wins during the 14-race season, the podium result was more than enough for Dixon to claim the title.

THE MODERATOR: Welcome, everyone, to the final post race NTT INDYCAR Series video conference of 2020.

We are joined today so far by Ted Klaus, who is the president of Honda Performance Development. Congratulations, Ted. Thanks for joining us.

THE MODERATOR: A few fun facts for you about Honda. It is their third manufacturers championship. Their last eight championships have come with four from Scott Dixon and four from Dario Franchitti.

TED KLAUS: Third in a row.

THE MODERATOR: Ted, tell us how wonderful it is to win your third-in-a-row manufacturers championship.

TED KLAUS: It’s the first time we’ve ever achieved that in our 27-year history. Obviously we’re excluding the time when we were the sole manufacturer.

The way it makes you feel, you’re just very, very grateful and appreciative of many people. Certainly the whole team at Honda, our extended family, all of the race teams and drivers that really earn it on the track. Then you appreciate INDYCAR and the fans for really not giving up on 2020. In spite of all the challenges we’ve all faced, we’ve kept ourselves going.

I know in the big scheme of life racing maybe is quite frivolous. Hopefully in some small way we’ve contributed to the normalcy, the mental stability of the world for those people that are INDYCAR fans.

Those are just some thoughts about how I feel.

THE MODERATOR: Thank you. I agree, it’s been a little bit of normalcy here.

We’ll take questions from the media.

Q. Not only is it a situation where you won your third in a row, but all three of those have come under your team being at the helm. You’re almost like a dynasty in some ways. This is your last INDYCAR race in your position. What are your thoughts on being able to accomplish this much under your regime?

TED KLAUS: As you know, in life as a leader, all you can do is focus everyone on the targets at hand, seek to align them, then unleash their own personal passion. I’ve been very fortunate. We have great leaders within our team and our extended team. Really the people that came before me, Erik Berkman, Art St. Cyr, they established relationships with Rahal and Ganassi and Andretti and Shank, Dale Coyne.

As you know, I’m riding a little bit on someone else’s coattails. At the same time we earned it. We worked our butts off and earned it. Really a shout-out to everybody at team HPD, team Honda, our fans, our dealers, everyone that supports us.

Q. The difference this year is the fact that last year when you won the manufacturers title, a Chevy driver won the championship. This year it’s a Honda driver. How important is that for you to get both in the same year?

TED KLAUS: It’s unusual. It’s rare that you would dominate the 500 the way we did, support a single driver to win the drivers championship, then bring home the manufacturers trophy.

I’m not sure how many times in our 27-year history we’ve done that. But it’s very, very special. It’s not to be taken for granted.

Then another fun fact is that in the 500 this year, the picture of the cars coming across the line, you have four Hondas from three different teams. We’re always very proud. We really seek to power every team equally, give them all an equal chance to win. I’m not sure who is going to challenge Scott next year, but I’m looking forward to at least a couple other Honda drivers.

Q. Explain to me a little bit where this ranks for yourself personally in terms of your achievements, given the year that we’ve had with COVID, all that kind of thing.

TED KLAUS: Yeah, Honda is a very special company, formed by a gentleman post-World War II who I think had the soul of a maverick wonky American or Italian or whoever. Mr. Honda, I mean, he built Suzuka F1 track at a time when only 3% of the roads in Japan were paved.

So for me personally, even though I never met Mr. Honda, I’ve been spiritually motivated and been fully engaged to work at Honda for over 30 years. At that time I worked on technologies like super handling, all-wheel drive. I was able to lead the second generation NSX. For the last couple years I’ve led a group of people at HPD that are just so invested and so motivated on behalf of our drivers.

To me, to have had such a wonderful experience at Honda all these years, then kind of that topping on whatever it is you think is delicious, that little extra topping, to have this kind of a season in this kind of a year, I just feel very blessed.

Those are the thoughts.

Q. Where does Scott Dixon rank in your eyes?

TED KLAUS: Human beings are the thing that make the world go round. Scott is a very special human being. We called them the driver for the reason, because they drive the whole team. So Scott drives everything about not just Chip Ganassi Racing, but HPD. He drives us.

We need those kind of strong drivers to get the achievements that we seek. So, boy, I think Scott, I don’t think he’s done. I think he’s still hungry. I think it humbles all of us. So good for Scott.

Q. What challenges did the new Aeroscreen bring? Obviously you overcame them much more strongly. You still had to deal with the Aeroscreen in a way like any other manufacturer would. How did that work out for you guys? What were the big challenges?

TED KLAUS: That’s a great question. It was a big kind of change in the off-season. Really I would say the teams that embraced the driving simulator more holistically and were able to trust those results without a lot of track time were the teams that rolled off the trailers well.

You can see as the season evolved, the teams that were kind of catching up to those Aeroscreen balance issues, it changed the aerodynamics for the surrounding cars, not so much for your car. It changed the way the car transferred load, especially during cornering. The cars don’t just accelerate, brake, and corner, they do a lot of braking and cornering and accelerating and cornering.

It really did upset things. And some teams really struggled with it. Combined with less testing, less of kind of an iterative loop to confirm your assumptions, boy, you have to hand it to Chip Ganassi Racing. They rolled off the truck fast and early. Scott got it done.

You have to hand it to Penske and Josef at the end of the season coming back. Andretti as well. In the middle, Rahal marching along, really I think quite consistent and maybe we’re looking for a breakout year next year from Rahal. I certainly hope so.

Q. What are the bigger challenges going forward in 2021? Do you see more two-race weekends? How does that affect you?

TED KLAUS: I really hope for the fans that INDYCAR continues to look at the length of the races in conjunction with the TV package. You saw with the first Harvest GP race, a fantastic race broke out because we were able to just kind of get on with it, really turn ’em loose without having fuel- saving mode. That’s one thought for competition.

I think for us, it’s so many small little things. We’ll be entering our 10th year with this engine. It’s a lot of attention to detail. Also you got to hit the reset button. You’ve got to forget everything you did this year, get hungry again. You can’t let your mind say that it’s the 10th year. You have to assume there’s incremental increases in everything we do.

Finally the drivers need to drive us. We need to open up our ears and listen to Scott Dixon and Graham Rahal and Alexander Rossi and Colton Herta, Alex Palou, Jack Harvey, all these drivers. Let them drive us and our priorities for next year. Those are some thoughts as we go forward.

And David Salters is going to be my successor. He is no stranger to racing. He’s going to listen our teams and he’s going to drive HPD to bring the power to them.

Q. You went through the entire season with your three engines that you were allotted for each car. How important was that? How tough was that with such a shortened schedule?

TED KLAUS: Yeah, one of the kind of untold stories for both us and, quite frankly, for Chevrolet is we shut down our whole operations in a very short period of time in response to what was happening in the world. Of course, we weren’t unique that way.

Then we all realized that we need to get back to work. We need to build the engines for the season, for the Indy 500. There was a lot of uncertainty. I guess the best thing about the racing community is they’re able to take uncertainty and they just kind of chew through it. They come out with some solutions that could work.

Everyone got on with it. Maybe that’s kind of a skill we can bring to the world as we chew through some uncertainty in life, then we turn a bunch of unknowns into less unknowns.

Really proud of INDYCAR. INDYCAR led us. Chevy and Honda, we both responded to the challenge. Really good for all three partners as well as Firestone.

THE MODERATOR: Ted, thank you so much for joining us. Congratulations on your third straight manufacturers title, on a wonderful career. We will all miss you here in the paddock.