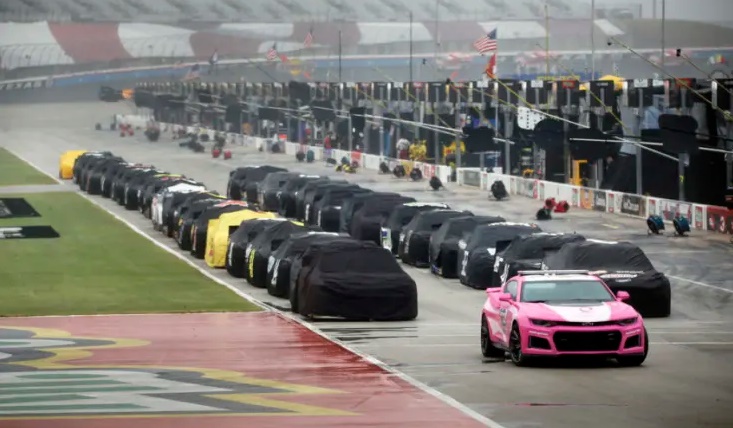 NASCAR officials have postponed the remainder of the Cup Series Playoff race from Texas Motor Speedway to a Tuesday restart because of persistent rain.

A NASCAR official statement regarding the weather at the 1.5-mile Fort Worth track stated: “With continued moisture and low temperatures hampering drying efforts, as well as a similar forecast for the remainder of this evening at Texas Motor Speedway, the resumption of the NASCAR Cup Series Autotrader EchoPark Automotive 500 has been pushed to Tuesday at 11 a.m. CT / Noon ET on NBCSN, PRN and SiriusXM NASCAR Radio.”

Fifty-two of a scheduled 334 laps were complete after Sunday’s start to the Autotrader EchoPark 500 before a nagging rain intensified at the 1.5-mile Fort Worth track. That forced officials to postpone the remainder of the event to a Monday resumption at 10 a.m. ET, but wet weather has placed those plans on hold.

Clint Bowyer is scored as the leader of the race in the Stewart-Haas Racing No. 14 Ford. Stage 1 is scheduled to end at Lap 105 with Stage 2 to end at Lap 210.

The 501-miler is the second of three races in the Round of 8 playoff bracket that will whittle the field to the four drivers who will compete for the Cup Series championship on Nov. 8 at Phoenix Raceway.