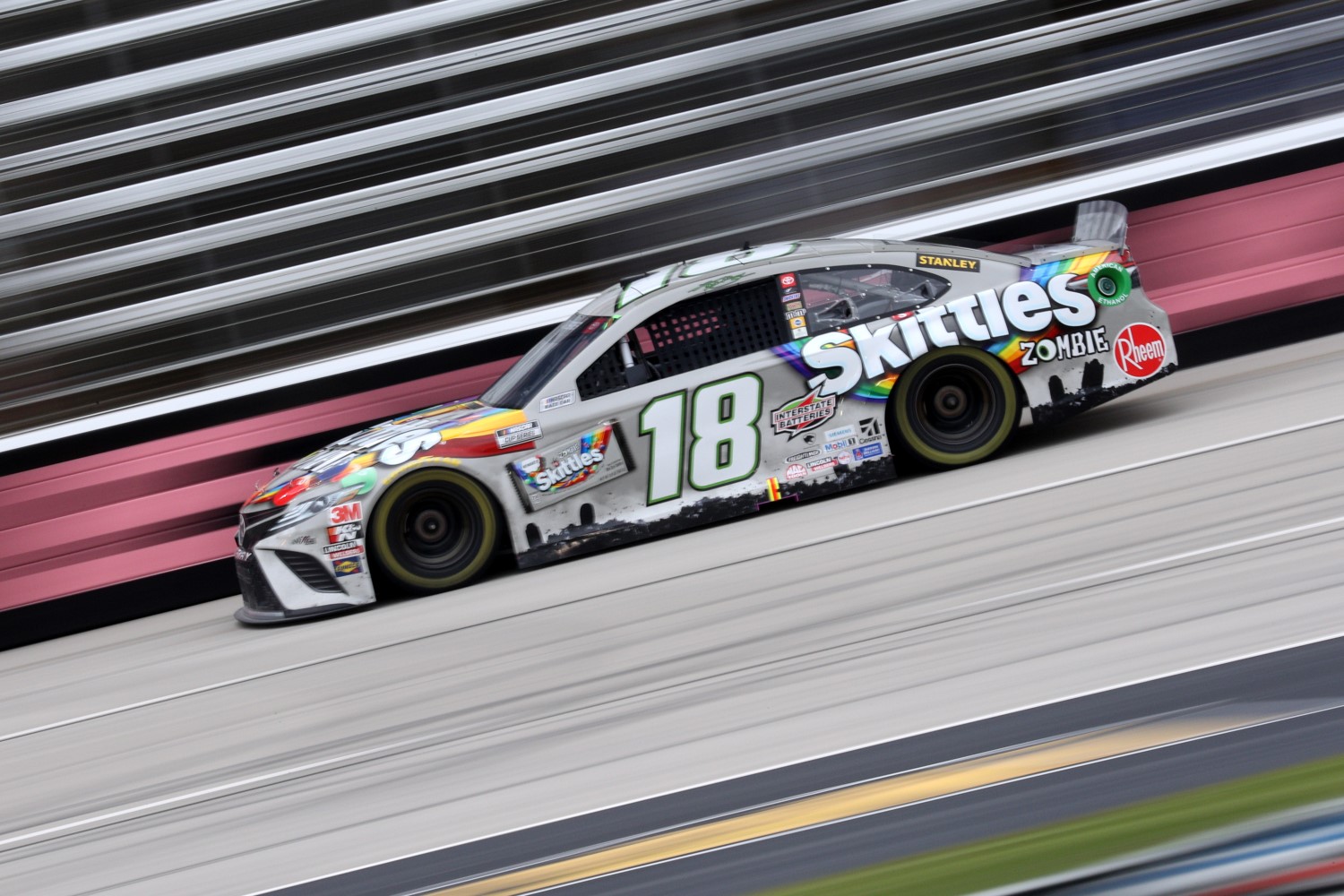 For Toyota, it the ninth NCS win of the season. With the victory, Busch extends his streak of at least one victory to 16 consecutive seasons.  Martin Truex Jr. (second) and rookie Christopher Bell with a career-best third-place finish completed the podium for Toyota.

Busch’s No. 18 Joe Gibbs Racing Toyota led a race-high 90 of the 334 laps in the Autotrader EchoPark Automotive 500. His fourth victory at the 1.5-mile Texas track was the 57th of his Cup Series career.

The victory denied the remaining Cup Series Playoffs contenders an automatic berth in the Championship 4 field that will compete for the Cup Series championship in the Nov. 8 finale at Phoenix Raceway. Three spots are still up for grabs in Sunday’s Round of 8 finale at Martinsville Speedway.

The race was halted Sunday after 52 laps by a persistent rain. That precipitation lingered in the Fort Worth area, washing out Monday and Tuesday rain dates before the event resumed Wednesday at 5:10 p.m. ET.

Before the rain delay, Kevin Harvick’s No. 4 Stewart-Haas Racing Ford sustained right-side damage after a Sunday afternoon scrape with the Turn 2 wall. The team battled through multiple vibrations Wednesday, and Harvick, a nine-time winner this year, held on to finish 16th, the first driver one lap down.

Clint Bowyer won the first stage and led 89 laps, but he was forced to pit with 24 laps remaining. He slipped to a 17th-place finish in what’s set to be his final Texas start.

The Round of 8 finale is the Xfinity 500, scheduled Sunday (2 p.m. ET, NBC/NBC Sports App, MRN, SiriusXM NASCAR Radio) at the .526-mile Martinsville track. The 500-lapper will be the next-to-last race of the year.

How were you able to balance saving fuel and staying in front of Martin Truex Jr.?

“I don’t know. Just kept getting great leadership and mentoring from Adam (Stevens, crew chief) and Tony (Hirschman, spotter) and those guys kept talking to me and kept reminding me about saving and being able to do what I could. Trying to stay in the draft as much as I could on the straightaways. It ran out coming right in here to do a burnout, so I had enough to get a little bit of a burnout. I don’t know if it will make it back. I can’t say enough about Adam Stevens and everybody at Joe Gibbs Racing. I appreciate all your hard work. Everybody at Toyota and TRD. This Skittles Zombie machine looked bad to the bone and it’s really, really awesome. I had to do a zombie remake here (helmet). This is what everybody looked like on their phones around here for the last three days. Everybody just zombied around. I wasn’t planning on that, but it kind of worked with this weekend, but more so with the times. This is going for auction. People can buy their tickets to win the raffle — $18 a piece at BundleofJoyFund.org or go to KyleBusch.com.”

How does it feel to get the win to keep your 16-year streak going?

“We finally got it. I was so nervous – I was nervous the whole last run. I’ve been in this position so many times. The last three laps though, that’s like winning the championship – that’s how nervous I was. I can’t believe it, but just so proud to be here. My team guys, awesome pit stops, they were phenomenal. I appreciate M&M’s, Interstate Batteries, Rowdy Energy Drink. We’re ready to fight next year, we’ll be back.”

This is your 57th win of your career, does this one mean a lot?

“Yes and no. They all mean a lot. There’s certain circumstances and certain specialties to all of them. This one means a lot just to keep the 16 going. We’re out of the Playoffs and have nothing to shoot for. Everyone thought we were duds. We don’t ever give up.”

Can you explain your emotion right now?

“I don’t know. It means a lot just to keep that winning streak going. That’s the biggest thing I was hoping for and obviously wanting to accomplish this year before the year was out. I can’t say enough about Adam Stevens (crew chief) and Tony Hirschman (spotter), my pit crew guys and everybody at Joe Gibbs Racing for all their hard work and everything that they do year in and year out. This Skittles Zombie machine looked bad to the bone, it’s really cool to run with Skittles and do fun schemes. Halloween-themed – everybody out there, happy Halloween coming up this week. We have a special helmet that’s going to go up for auction, it’s now a winning helmet. We’re raising money for the Bundle of Joy Fund. You can go to KyleBusch.com and purchase your tickets for our raffle in order to win my helmet.”

How close were you on fuel at the end of the race?

“I came in here to do a celebration and it was out. It’s running on the pump, but it’s running low. I don’t know if there’s anything left in the lines for me to get back to victory lane so if the tower is listening, send a tow truck in case I can’t go.

What does this mean knowing you had nothing to lose and everything to gain with this win?

“Winning the race was precedent. I knew we had a good car early on in the race. We were really loose, but we made some adjustments before the rain and then obviously sitting around for three days. Being able to get back at it, I knew we were going to have a good piece. It was just a matter of getting through traffic. Some of those guys on the short runs were just putting me in really bad aero spots and I was able to make something happen once we all got single-filed out I could roll and show them what we really had.”

Did you know the fuel situation with Kyle Busch in the closing laps?

“Yeah, they told me. We knew he (Kyle Busch) was close. The only thing we could do at that point, which we did all day anyway was try to run flat out. Hell of an effort by the Bass Pro guys and everybody that helps us. It just seems like one of those years where we’re second, third, fourth – we’re right there a lot. Just need a little bit more to be better.

What is the confidence level heading to Martinsville in a must-win situation to continue in the Playoffs?

“it’s high. I think coming here, we had a lot of confidence and obviously we had a good car. This time of the year, Playoffs – to finish second is great, but it’s not enough. I don’t know. Excited about Martinsville. I know we can win there and obviously we’ve shown that in the past. It’s a new race and a new week. We have to figure out how to be better than we’ve been there and feel like everybody will get better. Looking forward to it, excited for the opportunity to get to do this. Hopefully we’ll put ourselves in another championship race. Great job by our team. I can’t say enough. We just lack a tiny bit of speed off the 18 (Kyle Busch).”

You grew up watching races at this track, and now you come home with a top-three finish. How was your night?

“It was definitely hard fought. I felt like my Procore Camry was extremely fast. If I ever could have got by the 19 (Martin Truex Jr.), I feel like I would have been able to get up the 18 (Kyle Busch), but to pass him is another thing. I was able to drive up through the field pretty good, but once you got up to the top couple cars, passing got a little bit tougher. I’m really proud of everyone on this Procore Camry, 95 team. They’ve been bringing really good racecars to the track. We just haven’t been able to finish well and today we finally got one.”