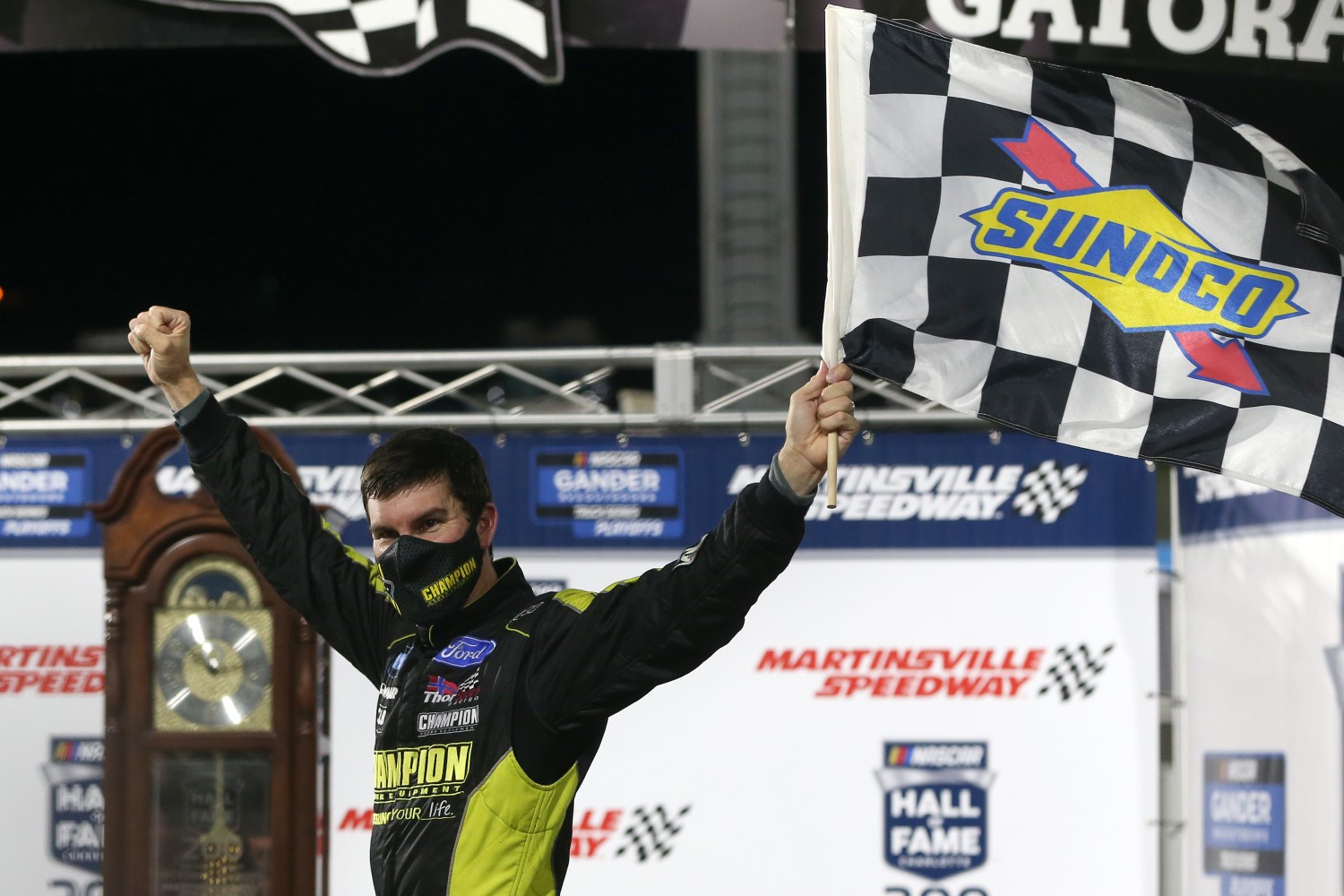 There was no mistaking the raised intensity level in Friday night’s NASCAR Hall of Fame 200 – the final race to set the NASCAR Gander RV & Outdoors Truck Series’ Championship 4. And ultimately, veteran Grant Enfinger rallied when he needed to, holding off his ThorSport Racing teammate Ben Rhodes for the victory necessary to punch his ticket into next week’s championship finale.

Enfinger, 35, of Fairhope, Alabama, earned this win managing two restarts in a frantic final 10 laps of racing on the 0.526-mile Martinsville Speedway notorious for its rough-and-tumble high-action brand of competition. He held off Rhodes by a mere 0.803 seconds to earn his career-best fourth win of the year and join Brett Moffitt, Sheldon Creed and rookie Zane Smith as the four drivers who earned a shot to challenge for the 2020 season title next week in Phoenix.

“It was tough, we knew we were going to have to take our gloves off and fight for this one,” Enfinger said after celebrating. “It’s been an up-and-down season for us, but we tended to peak when we needed to. And now I feel really good about our chances at Phoenix.”

Both runner-up Rhodes and Crafton failed to advance to the Championship 4 round. While Rhodes’ hopes were lost in a blink of an eye behind Enfinger, Crafton finished fifth and came within three painstaking points of Smith for that fourth and last championship-eligible position.

“We had a shot, but first off, congrats to Grant, they worked their butts off all year,” Rhodes said of his teammate. “They have three wins, this is their fourth, they deserve it.

“We were racing as hard as we can. Didn’t have the speed we needed, but we hung around and my team had good strategy all day long. It’s just unfortunate.”

With eight laps remaining, three of the front-running trucks spun in a big chain-reaction crash that involved Rhodes, Raphael Lessard and sidelined Moffitt. Rhodes was able to continue and rejoined the field in second place right behind his teammate Enfinger.

The field was then set for the final two-lap sprint to the finish. Rhodes had to line up directly in front of Christian Eckes with his championship hopes on the line – one week after the two had an incident at Texas Motor Speedway followed by post-race confrontation in the garage. Rhodes and Eckes had contact, but Rhodes was just not able to catch and pass Enfinger, who led 49 laps overall.

Perhaps the most unexpected competitive moment of the race came when regular-season champion Austin Hill brought his hobbled truck onto pit road and called it a night only 117 laps into the 200-lap race.

For a two-race winner, who has led the championship points standings since the second week of the season, it was an unexpected and gut-wrenching turn of events. He came into the race the highest ranked driver without a victory in this playoff round – holding a healthy 27-point advantage on the cutline.

Unfortunately, Hill started sensing a problem in his No. 16 Hattori Racing Enterprises Toyota by the start of the second stage. The team tried to diagnose and correct the problem on multiple pit stops, but the truck had to retire and a disappointed Hill could only hope something major would happen in the final laps that may put him back in position to race for the title. It did not.

“We’re not a 100 percent sure what happened but it was definitely blowing up on us,” Hill said. “It’s just frustrating to potentially end your season on an engine failure like that. … We should definitely be in this final four. … I can’t even put into words what I’m feeling right now.”

Creed won the first stage and led a race-best 65 laps. He finished eighth.