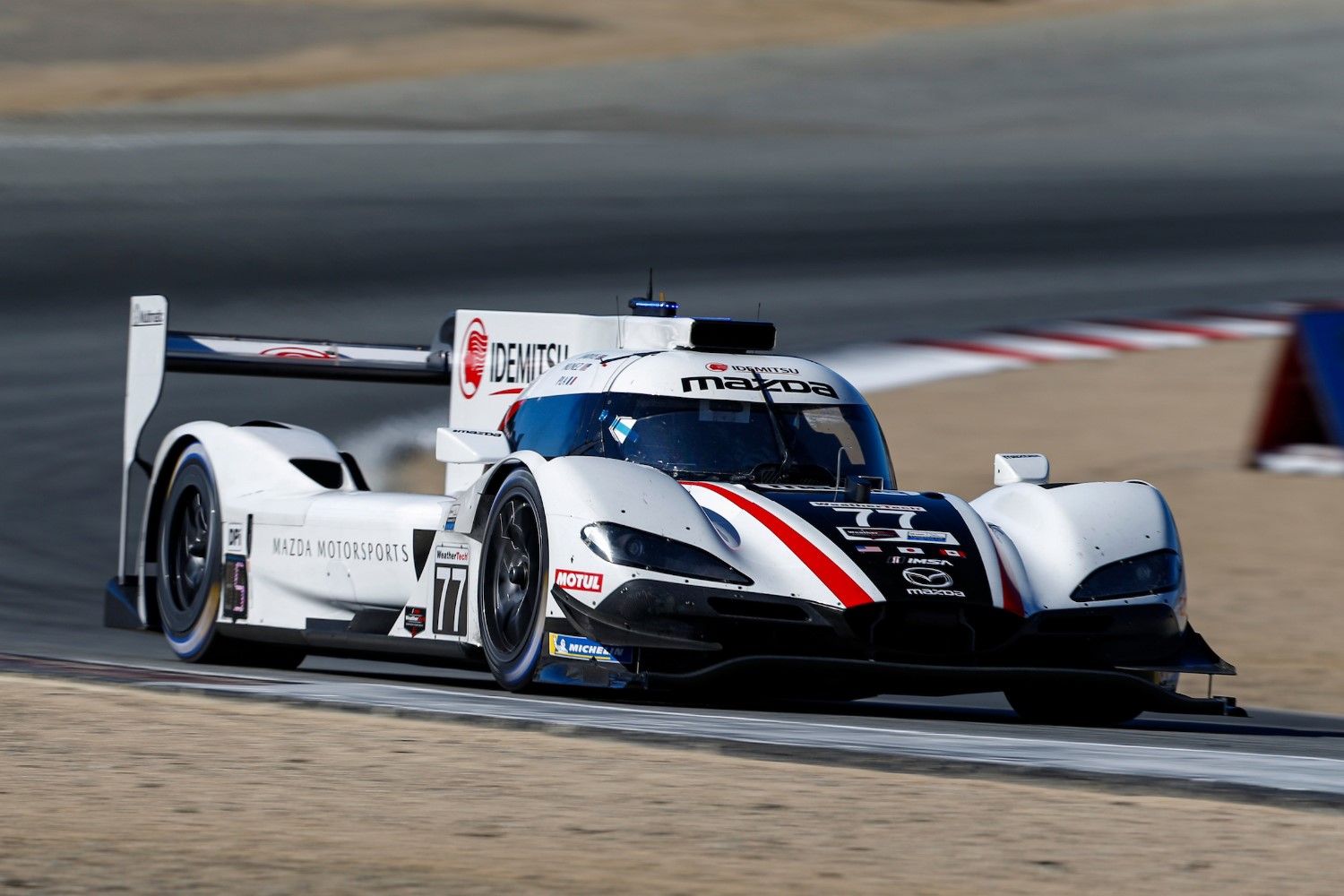 Jarvis turned the best lap Saturday in the No. 77 Mazda Motorsports Mazda DPi late in the second of two IMSA WeatherTech SportsCar Championship practices at WeatherTech Raceway Laguna Seca. Clocked at 1 minute, 15.692 seconds (106.441 mph) under sunny, warm and cloudless conditions, it gave Jarvis reason to smile but not get ahead of himself with so much work yet to do.

“We’ve got a tough job tonight, because you almost have to have a qualifying setup for the cooling conditions and then you have to take into account the change of temperature throughout the day,” Jarvis said. “That’s something we’ll need to sit down and focus on tonight and make sure we make the right changes at the right time.

“It’s very difficult because this morning it was very cool, and it was representative of qualifying, but the track was still very green. So, we didn’t get a perfect read on what conditions will be like tomorrow. Everybody is in the same boat. You are going to be making educated guesses and just have to do the best job you can.”

Meanwhile, two weeks after their teammates collided while battling for the lead and emotions flared at Motul Petit Le Mans, Castroneves and Nasr had a coming together early in Saturday’s second practice. Castroneves was penalized for unsportsmanlike conduct over the incident exiting the right-hand Turn 3 on the 11-turn, 2.238-mile road course. His No. 7 Acura Team Penske Acura ARX-05 also sustained damage that forced it to the paddock for repairs without turning a lap at speed in the session.

Nasr, in the No. 31 Whelen Engineering Racing Cadillac DPi, escaped the incident apparently undamaged but ranked sixth in the afternoon after Pipo Derani put the No. 31 atop the scoring pylon in the morning practice with a lap of 1:15.851 (106.218 mph).

With two races remaining in the season, Castroneves and co-driver Ricky Taylor trail Daytona Prototype international (DPi) points leaders Renger van der Zande and Ryan Briscoe of the No. 10 Konica Minolta Cadillac DPi-V.R by eight points. Derani is four points behind the No. 7 Acura duo, with the intensity heightened following the Derani-Taylor collision two weeks ago that cost both a shot at victory and paved the way for the No. 10 to win and expand its lead.

Results of other classes Saturday saw the No. 3 Corvette Racing Corvette C8.R top both sessions in GT Le Mans (GTLM), while the No. 96 Turner Motorsport BMW M6 GT3 set the pace in both GT Daytona practices.

“I hope the next two sessions we are leading, too … especially the last one (the race),” said Garcia. “I kind of had a question mark about this track. It is the first time we have run here with the C8.R, although Jordan and Tommy (Milner, No. 4 Corvette co-driver) did it on the simulator.

“I didn’t know what to expect here, but the car is running well again. It feels a little bit like Mid-Ohio. It’s very slippery but we are able to make the car work. So far, we are really happy with how things are going. It’s going to be tricky with tire degradation and track heat tomorrow.”

“We have the setup that’s going to make the car what we call ‘pointy’ for qualifying,” Auberlen said. “You rely on this extra grip that the rear is going to give you on the power-down side, for the wheel-spin side coming off the corners. You’re not just lighting the wheels up. And we’re going to set it way up on the nose so that on all these turns, there are so many of them that rely on the fronts to steer the car in so sharp that you have to have a very crisp front end.

“So, for qualifying we’re going to put it right on the ragged edge and Robby only has to hold on for three, four or five laps, and then we’ll reset it to what we set it for the race and the car’s going to be completely there. And we’ll have faith that because we were just in the same conditions that, hopefully, it’s going to be tomorrow.”