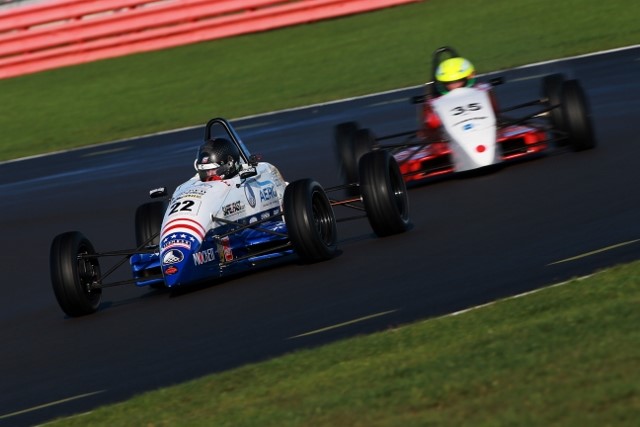 The pair are expected to start on the fourth row for their Semi Final races tomorrow.

A remarkable field of 103 cars – representing no fewer than 18 different marques dating back through the 53-year history of Formula Ford – was split into four groups for today’s initial round of competition on a treacherously wet 1.6404-mile track.

Aron (above), 17, from Winnetka, Ill., was disappointed to qualify only sixth for the third Heat, stymied by slower traffic in the awful conditions, while Lee, 18, from Avon, Ind., laid down the fourth fastest lap for Heat Four, a couple of positions ahead of fellow American teenager Max Esterson in an identical Low Dempsey Racing Ray.

Conditions steadily worsened throughout the morning, with strong winds and heavy rain causing a lengthy delay to the proceedings. There was an additional interruption during the opening Heat race when one of the pre-event favorites, three-time Walter Hayes Trophy winner Joey Foster (Firman) crashed at Brooklands. A restarted and shortened race was won by last year’s champion Jordan Dempsey (KMR Spectrum). Teammate Neil Maclennan, winner of this year’s Avon Tires National Championship, secured a narrow win over yet another teammate, two-time WHT champion Michael Moyers, in Heat Two.

An excellent first lap by Aron saw him jump from sixth to fourth in Heat Three, and while he subsequently lost one position to Jamie Sharp (Medina), he soon gained it back again – at the expense of Low Dempsey Racing teammate and 2019 Formula Ford Festival winner Jonathan Browne. Veteran Oliver White (Medina) emerged a narrow winner over Josh Fisher (Van Diemen), Sharp, Aron, David MacArthur (Medina) and Browne. The top six were blanketed by just over two seconds after eight laps of wheel-to-wheel racing on a treacherous track.

“After what felt like an eternity of waiting during a rain delay, the heat races finally came to life,” said Aaron. “The track was completely soaked but the sun came out which made for some bad visibility – similar in fact to the Brands Hatch Semi-Final one week ago. In the end I finished a solid fourth after battling with very talented drivers in a very hard heat. I can’t thank everyone at Low Dempsey enough for all their help and giving me some great equipment. I am very excited for tomorrow.”

Heat Four was a little less hectic, with another English veteran, Chris Middlehurst (Van Diemen) emerging victorious. Luke Cooper (Swift) and Michael Macpherson (Spectrum) squabbled over second, while Lee drove a measured race in fourth to hold off a determined challenge from Robert Hall’s Swift (below). Esterson followed in sixth, another 2.5 seconds back.

“Survive and advance, that’s all today was about,” said Lee. “And we were able to do just that. And show some strong pace as well. My standing starts in the wet still need a little work. I’ve gone from too much RPMs to not enough. I was able to make up the few spots I lost to secure fourth place. Tomorrow I plan to find a middle ground and get a good start.”