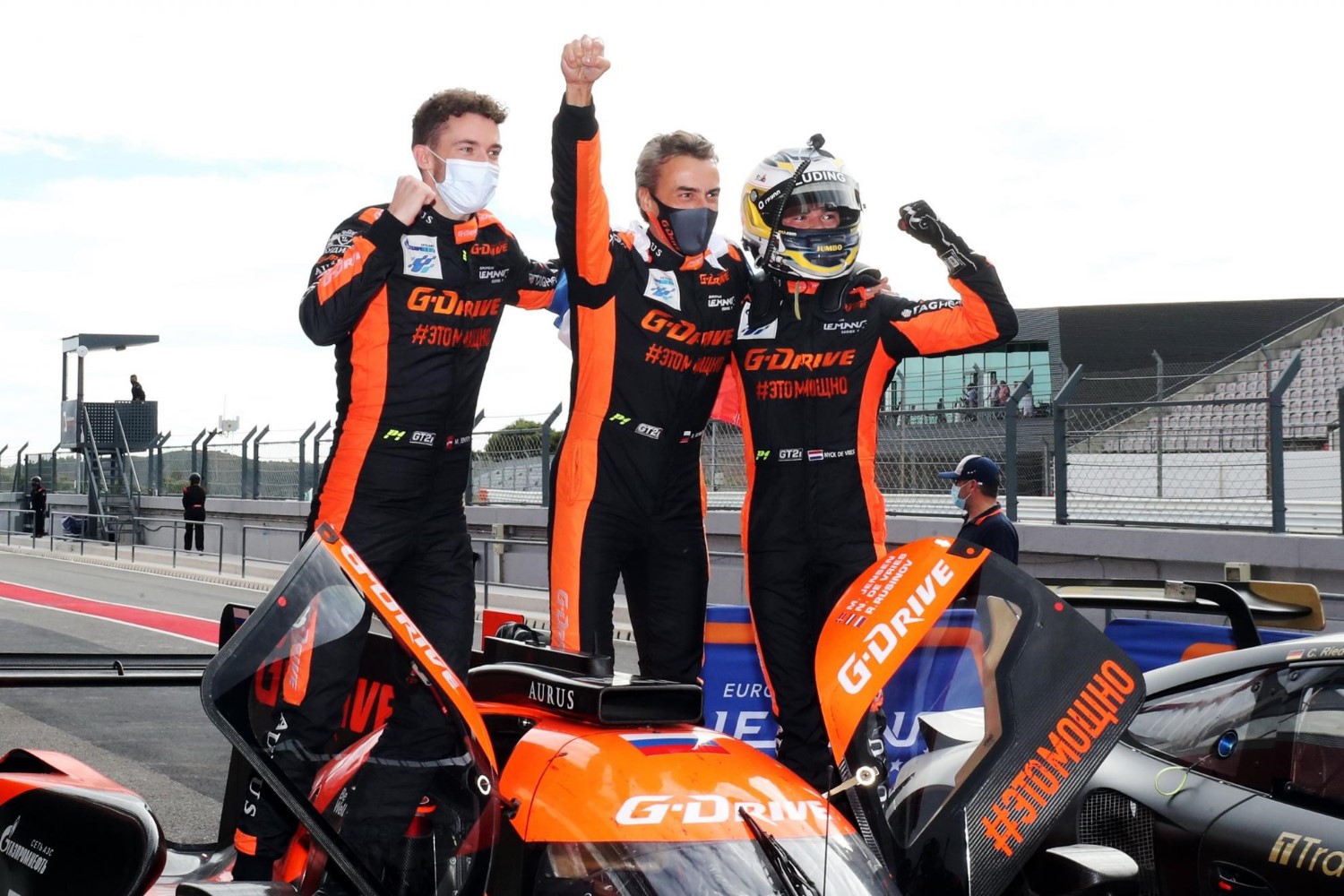 The final four-hour race of the 2020 season saw drama and excitement with the no26 G-Drive Racing Aurus 01-Gibson scoring the Russian team’s first ELMS victory since Barcelona 2019, with the Duqueine Team securing their first ELMS podium ahead of 2020 ELMS Champions United Autosports, with the no22 Oreca taking five podium finishes from five starts.

At the start of the race the no32 United Autosports Oreca of Will Owen was on pole and led the 36 car field into the first corner. However, Roman Rusinov in the no26 G-Drive Racing Aurus got a great start from sixth on the grid, sweeping past Owen on the outside into the lead at Turn 1.

Rusinov led Owen until the Russian driver ran wide at T11 avoiding an LMGTE Ferrari, allowing Owen to drive past and into the lead.

Ten minutes into the race a Full Course yellow period was declared to remove the no66 JMW Ferrari from the gravel on the exit of Turn 5.This brought several cars into the pits to take advantage of the situation.After five minutes the race went green again .

Rusinov was pushing Owen hard, trying to get ahead of the American.After several attempts the no26 Aurus regained the lead with a move down the inside into Turn 1 and pulled out an eight-second gap before the two cars headed to the pits for the first stops The cars that had pitted under the full course yellow were now at the head of the field, with Konstantin Tereschenko in the no30 Duqueine Team Oreca leading from Phil Hansen in the no22 United Autosports Oreca.Mikkel Jensen took over from Roman Rusinov and was in third place in the no26 Aurus, with Alex Brundle now at the wheel of the no32 Oreca.

Another Full Course Yellow was declared after 80 minutes of racing when the no88 AF Corse Ferrari went off into the gravel at the final corner and, once again, several cars took the opportunity to pit.

Mikkel Jensen was now in the lead for G-Drive Racing, with the no22 Oreca in second place with Filipe Albuquerque in driving seat. The Portuguese driver was 20 seconds behind Jensen but had his teammate Alex Brundle right behind challenging for position. For several laps the two battled, being careful not to trip over each other. Eventually Brundle passed Albuquerque only to pit on the next lap for fuel. The no26 Aurus also pitted so Albuquerque went into the lead of his home race until he had to pit ten minutes later.

The Safety Car was deployed with 90-minutes left on the clock after the no60 Iron Lynx Ferrari’s rear tire delaminated at the pit entry, spreading debris across the track.

At the restart the racing resumed with Jensen handing over to Nyck De Vries, who was 13 seconds ahead of Albuquerque who was, in turn, 6 seconds ahead of Jonathan Hirschi in the no30 Duqueine Oreca and the no32 United Autosports Oreca, with Job Van Uitert now at the wheel.

The final stops happened in the final 20 minutes with De Vries regaining the track ahead of Tristan Gommendy in the no30 Oreca, with Phil Hansen now back behind the wheel of the no22 United Autosports Oreca. Hansen held a ten-second lead over Van Uitert in the no32 Oreca, which was good enough for the Dutch driver to claim the Vice Champions position for himself, Will Owen, Alex Brundle and giving United Autosports a 1-2 in the championship standings.

Nyck De Vries took the checked flag in the no26 G-Drive Racing Aurus to claim his first ELMS LMP2 victory and give the Russian team its first win of the 2020 season.

United Autosports secured their third LMP3 title with the no2 Ligier-Nissan of Rob Wheldon, Tom Gamble and Wayne Boyd winning the race to become the 2020 LMP3 champions. Their championship rivals joined them on the podium with the no8 Realteam Ligier in second and the no13 Inter Europol Competition Ligier in third.

LMGTE: As Close as it Gets!

The destination of the LMGTE Team and Driver titles couldn’t have been closer when rivals Proton Competition and Kessel Racing finished 1st and 2nd in Portugal. The two teams were tied on 99 points, and they both had two wins, two seconds and one fourth and two pole positions from the five races. The crew of the no77 Proton Competition Porsche – Christian Ried, Michele Beretta and Alessio Picariello – were declared champions due to the fact they had won the first race of the season at Paul Ricard.

The no60 Iron Lynx Ferrari started the 4 Hours of Portimão from pole position and 2020 Michelin Le Mans Cup Drivers Champion took full advantage to open up a small gap to the no88 AF Corse Ferrari of Francois Perrodo and the no77 Proton Competition Porsche of Christian Ried. The championship leading no74 Kessel Racing Ferrari was down in 8 th place.

The no66 JMW Motorsport Ferrari of Rodrigo Sales went off into the gravel on the exit of Turn 5, causing the first Full Course Yellow period to be declared. The rest of the LMGTE field stayed out on track as the LMPs took advantage to make an early stop.

The race went green and the status quo remained in the class battle for several laps with Duncan Cameron in the no55 Spirit of Race Ferrari closing up in Christian Ried’s Porsche to take third place at the end of the first hour. However, the places switched back a few laps later with Michele Beretta and Aaron Scott now behind the wheels of the Porsche and Ferrari, with Sergio Pianezzola out in front in the no60 Iron Lynx Ferrari.

The no93 Proton Competition Porsche made a stop to replace a rear tire when it started to show signs of delamination. A quick pitstop for new rubber and the car re-joined the race.

Another Full Course Yellow was declared after 80 minutes of racing when the no88 AF Corse Ferrari of Francois Perrodo went off into the gravel at the final corner from second place, promoting Beretta’s Porsche up to second place. The no77 Porsche moved into the lead when the no60 Ferrari was given a penalty for causing a collision with the no66 JMW Motorsport Ferrari at Turn 5, dropping the Italian down to second place. Pianezzola was fired up and retook the lead after 120 minutes of racing.

The luck of the no60 Ferrari got worse when the rear tire delaminated and caused damage to the car as well as spreading debris over the track at the pit entry. The Safety Car was deployed to allow the track to be cleared as the Iron Lynx Ferrari limped into the pitlane.

The no74 Kessel Racing Ferrari was making progress and was up to second place with David Perel at the wheel and was ahead of Alessio Picariello in the no77 Porsche. Picariello moved ahead as the clock counted down and opened up a 60 second gap over the course of the next 30 minutes.

The Proton Competition crew were concerned about tire wear after the incident with the no93 car so called Picariello in for a new tire. His lead was such he was able to rejoin 28 seconds ahead of the Kessel Ferrari, with Duncan Cameron in the no55 Ferrari in third.

The no83 Iron Lynx Ferrari of Michelle Gatting had to pit with less than 15 minutes on the clock when her car suffered a rear puncture.

The no77 Proton Competition Porsche took the checked flag and the championship, 32 seconds ahead of the no74 Kessel Racing Ferrari. The no55 Spirit of Race Ferrari was third but was given a 30 second penalty for not respecting the driving time for gold driver Matt Griffin and the no60 Iron Lynx Ferrari took the final podium spot ahead of the no93 Proton Competition Porsche.