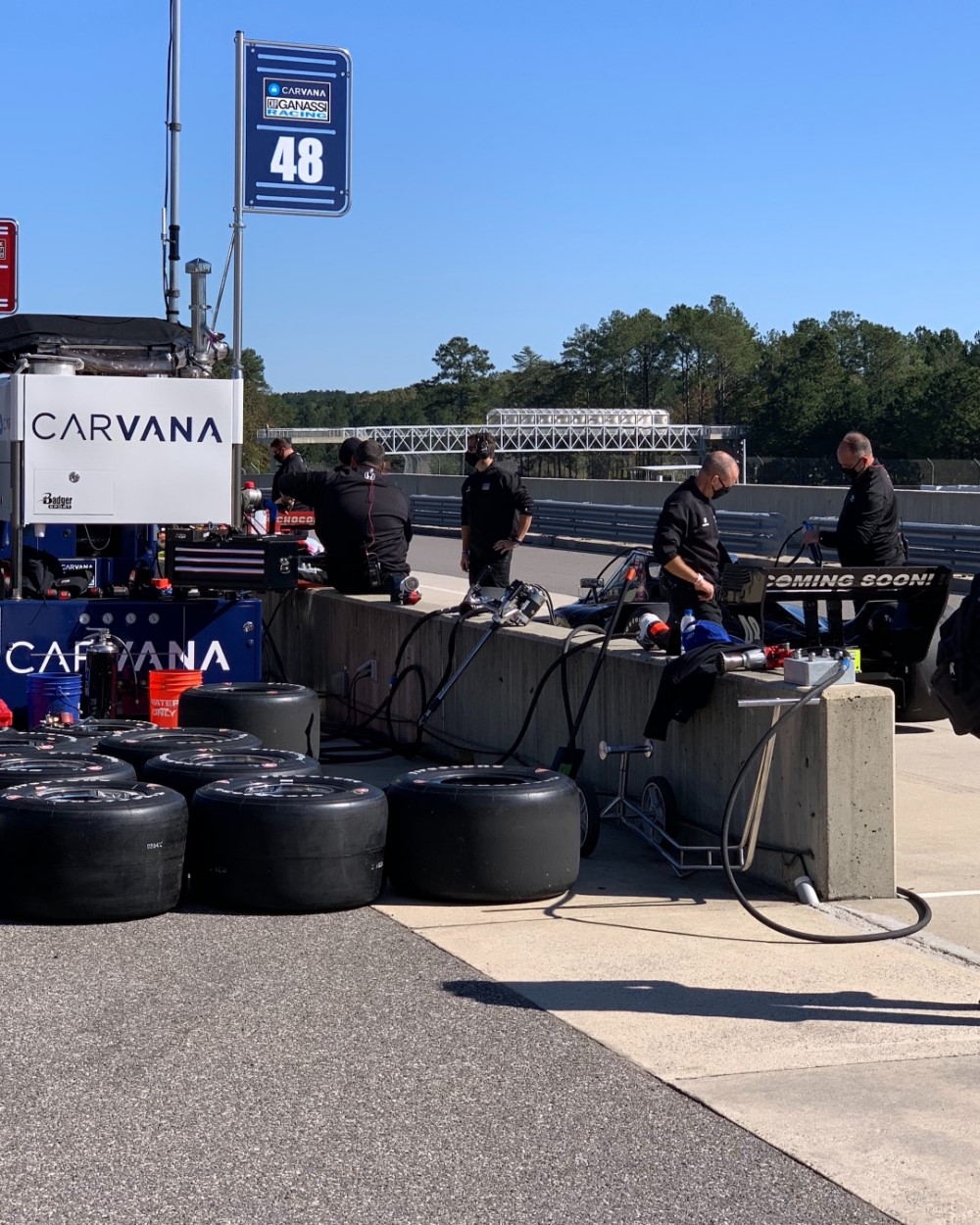 NASCAR legend and 7-time Cup champion Jimmie Johnson was at Barber Motorsports Park in Alabama Monday testing for the IndyCar team he will be driving for next year – Chip Ganassi Racing.

During his lunch break he met with the media to answer a few questions.

Barber Motorsports Park is “a very technical track, a track that rewards bravery and aggression. I’m trying to get comfortable in these cars. … I’m trying to figure out where the edge is and push it with the car.”

THE MODERATOR: Welcome to the NTT INDYCAR Series availability with Jimmie Johnson from Barber Motorsports Park.

Jimmie, you’ve been on track all morning at Barber Motorsports Park with your new 48 Carvana Chip Ganassi Racing team. What has the morning been like so far?

JIMMIE JOHNSON: Just adapting to this new environment. There’s so many things that are foreign to me, working through a lot of those little technicalities with the car, with the cockpit, procedures, then trying to get some laps in there as well.

There’s so many cars here. To get there out on the track, find a clean spot to run, take my time getting up to speed has been a bit challenging with the heavy traffic and how fast these guys are.

Was able to get probably 20 and 30 laps this morning. Shaving seconds off at a time, so I’m still a ways off. Looking forward to the second half of the today, getting down to a much smaller window on track.

THE MODERATOR: We’ll take questions from the media.

Q. In your previous INDYCAR test, you were the only driver on the track. Now you have 20, 30 other cars to contend with. What’s that like in this type of car with that type of traffic?

JIMMIE JOHNSON: First of all, I just want to be courteous on track, not be the rookie that makes mistakes. I feel like I’ve probably been a bit too worried about my mirrors, making sure I let guys by.

Now that I’m closer on pace, it takes them a lot longer to get to me, catch me, they can pass me in a traditional braking area. Everything is sped, it’s so much quicker, from the car speed everything, so much quicker, closing rate, braking distance. All those things just compound, things happen a lot quicker.

Each time I go on track, things seem to slow down a bit more for me. I’m able to work through all that stuff to get faster and get more comfortable.

Q. The Cup cars have a lot more things inside their cockpit that contain you here. Here in an INDYCAR, it’s even smaller. What has the difference been like getting used to the environment?

JIMMIE JOHNSON: It’s a really tight squeeze to get in these cars. There’s a process twisting your shoulders and your hips to get past the headrest, down into your seat itself. You don’t buckle your own seat belts in these cars, someone does it for you, tightens you.

Inside the car there’s many more adjustments and knobs that the team needs you to work on over the course of a lap and course of a run.

Unfamiliar in every aspect for me in the car. The way you start it, turn it off. A lot of different procedures that take place. Far different in a very compact area.

Q. A trip to Alabama for you always meant Talladega, restrictor plate racing. What do you think of the Barber course?

JIMMIE JOHNSON: It’s a beautiful facility. I’m highly impressed. A very technical track, very attractive. Rewards bravery and aggression. I just don’t have that yet. I’m still trying to get comfortable in these cars.

These blind corners, the approaches to turns that are on an uphill, you can charge them a lot harder, extract a lot more speed out of the car.

Really I’m trying to figure out where the edge is, where to push the car. But it’s a beautiful track. It really is a one-of-a-kind racetrack.

Q. You mentioned you shaved seconds off your laps already. Have you compared where you are to other guys? Can you tell us where you are at this point?

JIMMIE JOHNSON: I haven’t had a chance to yet. We just broke for lunch. I came in the transporter to hop on the Zoom call, part of the lunch break here. In a few minutes, once we drop off this call, I can look.

They handed me a sheet that compared me to I believe Dixon. The slow-speed stuff I was really trending well, didn’t have a lot to work on there. It was the high-speed corners, the flat-out corners where you have to trust the vehicle, trust the downforce that the vehicle provides. That’s where I had my biggest gap. I assume that’s still the case. I look forward to more reps really to help close that gap today.

Q. Are you trying to avoid benchmarking by some degree? At the end of day two do you want to be within a second of the top pace? Are you setting goals?

JIMMIE JOHNSON: I wish there was a day two. It’s only a single-day event. That would be awesome, a great goal to set for myself. First half is gone. Only had my 30 laps out there. Just the way things worked out this morning with the temperatures being cool, we couldn’t start when we had hoped.

But, yeah, I would love to be within a second of the guys. I’m not there quite yet. Taking big chunks out of it each time I’m on track. There’s really no runoff. If you go off, you’re in the grass, into a barrier. More important to me is logging every lap I can just because I’m starting at ground zero.

I feel like that’s more important than anything, although I’m eager to look at the sheet, see how far I’m off, how much ground I need to make up. I’ll keep a close eye on that.

Q. After this, Laguna Seca, is that your last one for the year?

JIMMIE JOHNSON: I believe that will be it for the year. There’s a Sebring test in January that we’re looking at. I probably have five or six test sessions before the season starts. I think seven between now and next season will take place.

Those are only one-day events, not two-day events for testing. The weekend schedules are getting more and more condensed. They released some data how these practice sessions are going to be less next year even if we have a traditional style weekend.

It’s a bad time to be a rookie, even a 45-year-old rookie with all the years I have in racing. To learn these cars and tracks, it’s going to be a real steep learning curve for me.

Q. Just wondered where you are at in terms of your adaptations to the car now. Do you feel like you’re sort of up to speed and starting to work on the setup, getting what you need from the car, or still learning the boundaries from the car before you can delve into that setup aspect?

JIMMIE JOHNSON: Yeah, I’m still working on the boundaries. I would say the low-speed stuff, I have a good sense of it, seem to be on pace, where I need to be. Faster turns with the vehicle speed creates more downforce, I’m just not used to that environment. I’m used to trusting that all the years that I spent in the heavy NASCAR vehicles without much downforce.

That’s the challenge right now, to carry a bit more speed in, use a lot less brake, let the vehicle create the grip and the downforce from the corner itself.

JIMMIE JOHNSON: I do. Honestly I’m just trying to find my own approach and rhythm right now, set a realistic pace. It’s easy to overwhelm yourself with information, kind of get lost in the details.

On the Cup side, I’ve been fortunate to spend a lot of time there, understand exactly what I’m looking for. Much more detail-oriented. I’m not there yet. Looking for big pieces and broad strokes than getting into those fine details.

Q. You’re on a road course right now. When you look at the particular street courses, you mentioned Long Beach, obviously St. Pete, Detroit, what challenges you about that? What do you like about going on those street courses? Are you looking forward to them later?

JIMMIE JOHNSON: Yeah, I’ve never been on one in a car to really understand it from the driver’s seat. Going to many street courses, especially to Long Beach Grand Prix as a kid, just the anticipation and excitement from the parking lot all the way into wherever you are watching the race from, watching the cars go by. There’s such a neat environment that’s involved.

I remember parking our car, hearing the engines running, the shifts, the rev limiters, just all the sounds you have at a street circuit race. My heart would start racing, excitement to catch a glimpse of a car going by, crossing over a pedestrian bridge, hearing them scream underneath you, just get your adrenaline pumping.

That’s my only interaction and excitement that I have. Going back to St. Pete a couple weeks ago. Funny how familiar that was, how similar it was when I was a kid going to Long Beach Grand Prix.

I really look forward to being in the seat, understanding the true challenge that takes place around the track.

It’s a little different way of racing from what I’ve been told with really soft tires and the lack of visibility. It’s an interesting combination of aggression, blind aggression, if you will, around the track. It’s going to be really important for me to get as many reps before those street circuits start up, which we open with. That’s going to be kind of tough for me.

Sim time, test time, every lap is going to make such a difference for me now running into St. Pete.

JIMMIE JOHNSON: I’ve watched it. Much different experience. I’m used to Michigan on the Irish Hills, on a huge, fast oval. My lifelong attorney has been based in Michigan forever. Really my trips to Detroit have been Chevy focused or attorney focused. Just a different head space for work.

Actually to pull into Detroit, carry a fire suit and helmet, burn some gas, is going to be a much different experience than I’ve ever had.

THE MODERATOR: Thanks, everybody, for joining us. We have to let Jimmie go. He has a busy afternoon. Best of luck with the rest of day and in Phoenix this weekend.

JIMMIE JOHNSON: Thanks, everybody.