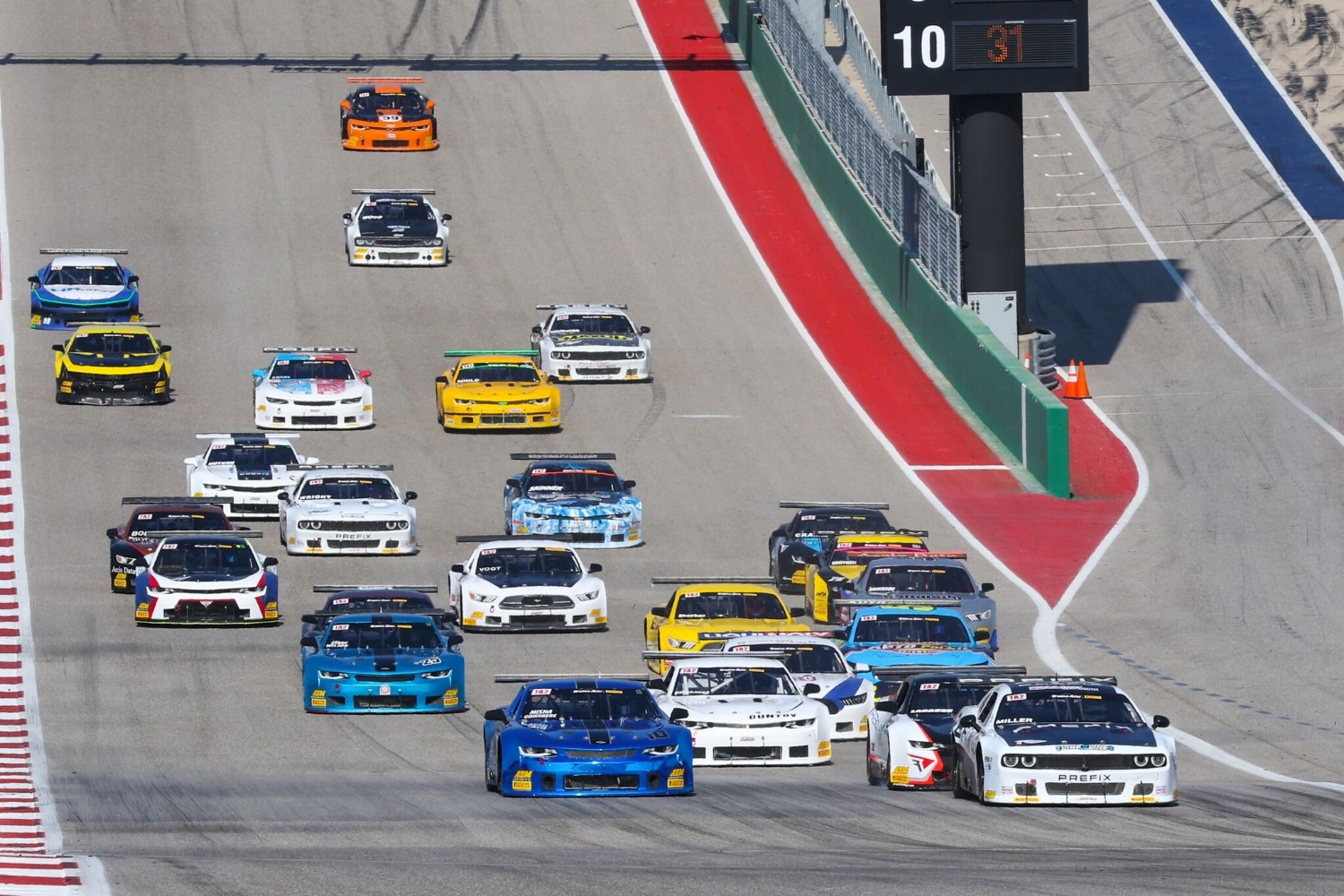 The Trans Am Series presented by Pirelli returns to racing this weekend (November 6-8) for the Austin SpeedTour with Sportscar Vintage Racing Association at Circuit of The Americas, kicking off the final stretch of the 2020 season.

With a season-high number of entries, the Trans Am National Series and West Coast Championship fields unite for a weekend of intense action as drivers from both series vie for several titles. But, with added competition from Texas natives chasing the Southern Cup title and legendary drivers like Boris Said and Paul Tracy looking to top the podium, the fight for precious championship points gets even tougher as Trans Am returns to the modern Texas circuit.

The talent pool deepens as one of the largest TA2® powered by AEM fields storm the 20-turn, 3.41-mile F1-grade circuit this weekend, boasting several seasoned veterans like former NTT IndyCar Series driver Tracy. Piloting the No. 87 3-Dimensional Services Group Ford Mustang, Tracy will fill in for Doug Peterson.  While Tracy made his Trans Am debut two years ago, this will be his first appearance with the series at COTA

“I am looking forward to competing this weekend with Trans Am at Circuit of The Americas,” said Tracy. “The competition is always tough, but by partnering with Doug Peterson’s championship-winning team, we expect good results for my first outing with Trans Am at COTA.”

Reigning team champion Stevens-Miller Racing (SMR) is leading the title chase in TA2® presented by AEM, with Mike Skeen behind the wheel of the No. 77 Liqui Moly / Turn 14 Ford Mustang. Skeen has a 43-point lead over second-place Thomas Merrill, and with Merrill missing this even, Skeen looks to put even more distance between them before the two meet again at Michelin Raceway Road Atlanta.

SMR has also put a priority on securing the Northern and Southern Cup with Ohio-based drivers Alex Wright and John Paul Southern Jr.

Traveling with the team to COTA in the Arlington, Texas-based Berryman Mustang, Wright can relax this time out as he clinched the Northern Cup title during the final round at Virginia International Raceway.

However, young-gun Southern Jr. trails veteran racer Maurice Hall (No. 57 Silver Hare Racing Chevrolet Camaro) by 12 points in his Southern Cup campaign for SMH. Bouncing back after suffering a weekend-ending crash at VIR, Southern Jr. will get another go at clinching his first Trans Am title in his rookie season in the newly rebuilt No. 61 Pittrace.com/SouthernMotorsports Chevrolet Camaro.

Trans Am offers several championships throughout the year including Northern and Southern Cups. The two regional groupings of Trans Am competitions were designed to reward competitors and teams that tackle certain segments of the Trans Am schedule, but do not undertake a full season commitment.

In TA, class title holder and current points leader Ernie Francis Jr. (No. 98 OneSouthFloridaWealthAdvisors Ford Mustang ) is hoping to fend off Tomy Drissi (No. 8 Lucas Oil Chevrolet Camaro), as the duo are separated by 37 points leading into COTA for the national TA class championship. The Texas circuit saw Francis Jr. claim the victory in 2018, but last year after dominating most of the race, Francis Jr. lost power steering and podium position in the final laps of the race.

Francis Jr. also has to worry about Said challenging his seventh consecutive charge to the championship. Francis Jr. and Said went head to head last round at VIR. In a battle that went down to the finish line, Francis Jr. beat the pole-sitting No. 2 WeaverRcng/Techniques/SRIPerfor Dodge Challenger.

Though he is not in championship contention, Said will be fighting for the checkered flag he missed out on at VIR.

I’m looking forward to COTA, it’s an awesome track,” commented Said. “I’ve raced there in a lot of different kinds of cars. It’s a track that rewards being real aggressive, so it’s my kind of place! I am excited to be back racing with Trans Am.”

Four-time winner Lee Saunders will lead the SGT assault in the No. 84 Landsearch LLC Dodge Viper. His push to clinch an early title will be challenged by rookie Adrian Wlostowsk (No. 96 F.A.S.T. Auto Ford Mustang), who is fresh off his maiden series victory.

With his closest competition in points missing Round 6, Tim Horrell (No. 45 Breathless Racing Porsche GT4 Clubsport) will use COTA as an opportunity pad his lead before the penultimate event at Road Atlanta.

Greg Pickett is the lone driver on the roster entered for both the National and the West Coast competition this weekend. Pickett has raced a perfect season so far out west, clinching the championship two rounds early with four victories in the No. 6 Pickett Racing Ford Mustang.

Entering as both a National and West Coast competitor, Pickett can score points and podiums in both series. The 73-year-old multiple Trans Am champion is up for the challenge.

“I missed my good friend Simon (Gregg) at Sonoma,” said Pickett. “I’m glad to see him back in the Camaro so we can go against each other in the same class this round. I also was excited to see my friend Tomy Drissi win this year at Brainerd and Chris Dyson win at Road America. It will be fun racing with them again.”

Hailing from Las Vegas, Michele Abbate (No. 30 GearheadCoffee/GrrRacing.com Chevrolet Camaro) was the first female finish on the podium in the TA2® class. Building off her season momentum, Abbate’s goal for COTA is to top the West Coast podium and finish the weekend with the championship lead. A narrow margin of nine points separates the Grr Racing driver from class points leader Tim Lynn. However, in a last-minute cancellation, Lynn will not compete at COTA, leaving the door open for Abbate to top the standings.

After missing the double-header feature at Sonoma due to schedule conflicts, Natalie Decker returns to the West Coast SGT class, driving for Tony Ave in the No. 04 N29 Technologies LLC Audi R8 GT4.

Joe Bogetich, in the No. 65 Westover/Albireo Energy Chevrolet Camaro will look to extend his lead in the GT West Coast points while battling hometown driver Sean Young in the No. 74 Corsair Racing Aston Martin Vantage GT4.

Trans Am will play host to a thunderous mix of 56 TA, TA2® powered by AEM, XtremeGT, SuperGT and GT class machines. The weekend will kick off with optional testing on Friday. Saturday the drivers will participate in practice followed by split class qualifying sessions that start at 4:10 p.m. Central. Sunday commences with a pair of 100-mile races starting with TA2® at 11:00 a.m. Central followed by the TA/XGT/SGT/GT feature at 1:05 p.m. Central. (Entry List and Full Schedule)