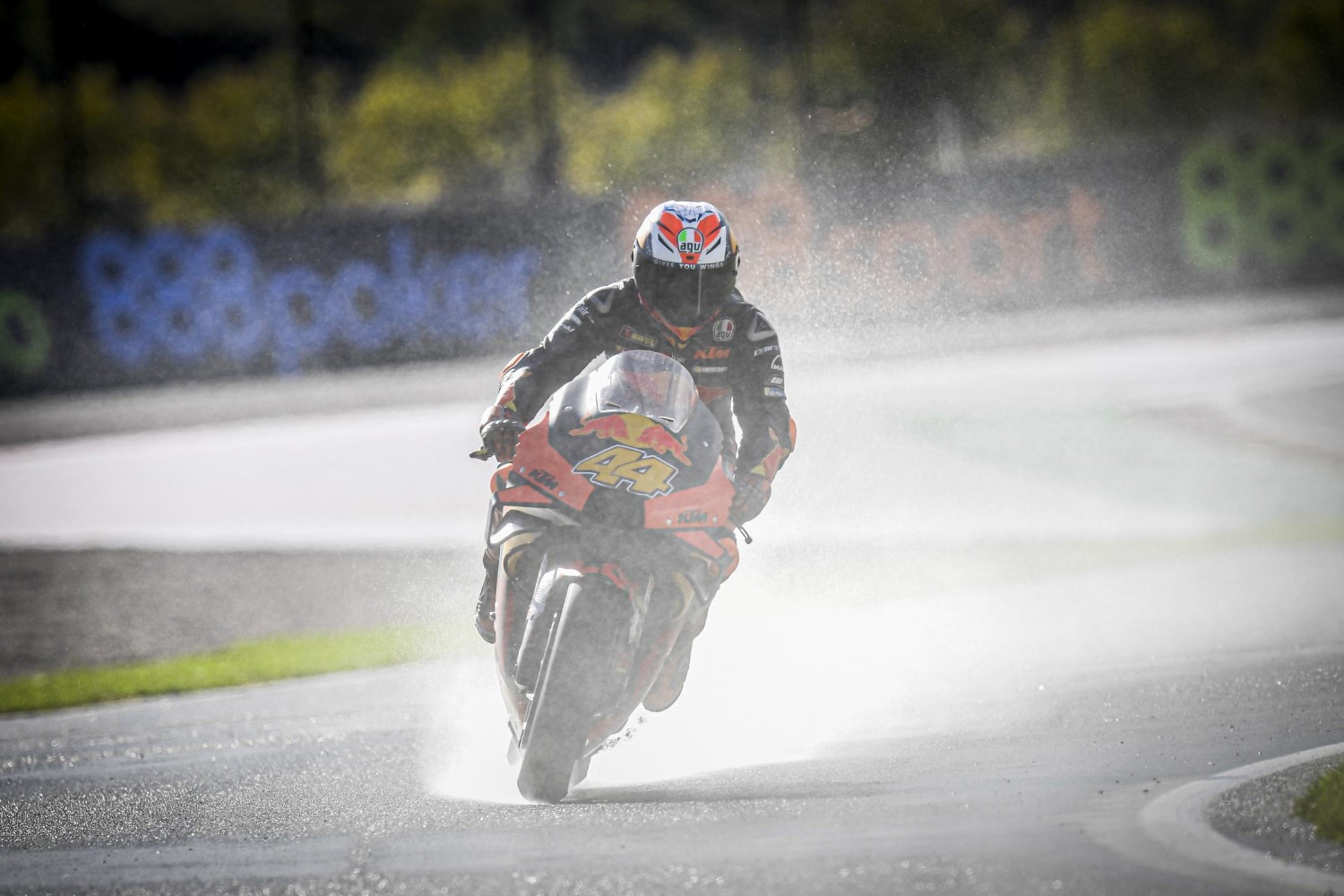 Red Bull KTM Factory Racing’s Pol Espargaro picked up a phenomenal second pole position of 2020 after mastering the wet conditions in Q2 at the Gran Premio de Europa in Valencia.

The Spaniard slammed in a late 1:40.434 to beat second place Alex Rins (Team Suzuki Ecstar) by a slim 0.041 seconds. Despite a late crash, Takaaki Nakagami (LCR Honda Idemitsu) claimed the final front row grid slot in P3, the Japanese rider also less than a tenth shy from P1 in a thrilling MotoGP qualifying.

Emerging through the Q1 shootout before Q2 was FP4 pacesetter Miguel Oliveira (Red Bull KTM Tech3) and FP3 leader Johann Zarco (Esponsorama Racing) in the wet but drying conditions. The sun was shining for the MotoGP™ pole position fight, but the asphalt was still wet. A dry line was appearing in some parts of the circuit, however, it was nowhere near dry enough for riders to risk Michelin slicks as all the Championship contenders – barring Maverick Viñales (Monster Energy Yamaha MotoGP) – were in the hunt for Saturday glory.

Franco Morbidelli (Petronas Yamaha SRT) pulled straight back into pitlane after his out-lap, a tire change for the Italian but it wasn’t to slicks. Rins set a 1:42.420 to set the first time of the session, but that was going to be beaten fairly quickly as some of the Q1 contenders dipped into the 1:41s. Rins did then set a 1:41.714 to extend his lead, teammate Joan Mir (Team Suzuki Ecstar) then went quicker by a tenth to sit on provisional pole.

The Suzuki stranglehold was then beaten by Nakagami as Andrea Dovizioso (Ducati Team) peeled into the pitlane while on a great lap. The lead then changed again, Morbidelli was at the summit but Rins then went faster for the third lap in a row, Fabio Quartararo (Petronas Yamaha SRT) – who has struggled all weekends in the wet conditions – went P8, six tenths off Rins’ time.

Nakagami was then on another flyer. The Japanese rider was 0.3 seconds faster at the second split and over half a second up through Sector 3. Coming round the final corner and firing his RC213V to the line, Nakagami shot to the top by seven tenths – goalposts well and truly moved, who could respond? Jack Miller (Pramac Racing) was trying. Late out his pit box, the Australian was straight down to business and claimed P2, but a mistake at the final corner cost him time.

The title chase leader then improved his time to go P3 as Dovizioso’s time was only good enough for P12. Rins was through the third split 0.041 under Nakagami’s time and the number 42 beat the Honda rider by 0.005 seconds. Nakagami then crashed at the final corner which brought out some yellow flags, Aleix Espargaro (Aprilia Racing Team Gresini) flew across the line to go provisional P4.

It was all kicking off in the final minute though. Rins was once more going faster and was 0.079 seconds under but there was a flying orange machine about to go top of the tree: Pol Espargaro. The Spaniard, who picked up his and KTM’s first MotoGP™ podium at the Circuit Ricardo Tormo in 2018, was pole position – for now. Could Rins ruin KTM’s party? Not quite, 0.041 was the gap between the compatriots as attentions turned to Zarco.

The Frenchman was flying. Zarco was 0.196 up through Sector 3 but a small mistake at the final corner saw the Ducati man lose time, the number 5 went P4 as the front row riders remained the same. Could Rins make one last-ditch attempt to snatch pole away from Pol Espargaro? Not quite, it was another good lap from Rins but the Suzuki rider settled for P2, Oliveira improved on his last lap to go P8.

A breathless wet qualifying session ends with Pol Espargaro and KTM on top. The number 44 earns his second pole position of the season as Rins claims his second consecutive front row – the same can be said for Nakagami. Three manufacturers lead the line from the top three positions and all three are looking strong in Valencia, two of them could become the ninth different winner of 2020 on Sunday.

Zarco was unlucky to miss out on the front row but after negotiating Q1, the double Moto2™ World Champion will be happy with P4. Championship leader Mir will launch from P5 after a solid afternoon’s work on home soil, Aleix Espargaro joins Mir on Row 2 and that’s the Aprilia rider’s best Saturday afternoon outing since his P4 at the Czech GP earlier this year. After showing strong pace all weekend, Miller settled for P7. Eighth place Oliveira was the only other rider to get within a second of Pol Espargaro and next to the Portuguese rider on the grid is leading Yamaha rider Morbidelli in ninth. The Italian has some work to do on Sunday afternoon as he sees Mir and Rins ahead of him, but crucially, there are three title contenders behind him.