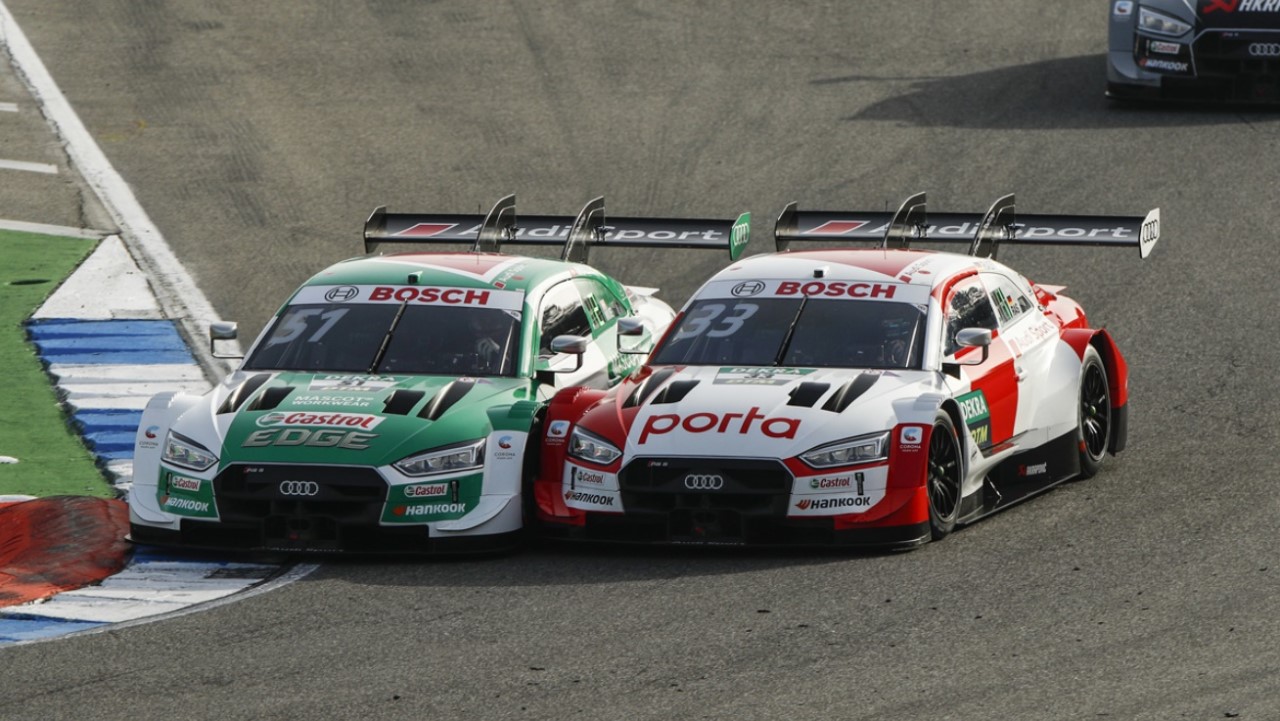 A tough duel for the DTM title: no presents were given between #33 René Rast and #51 Nico Müller in the 17th and penultimate race of the season at Hockenheim. They staged a nerve-wrecking duel for victory, in which Müller just came out on top against Rast, reducing the gap in the drivers’ standings to 13 points.

Excitement, therefore, is at its peak going into the final race of the season on Sunday. The situation: Rast is leading with 325 points from Müller with 312 points, can become champion by his own means in the race and defend his title.

While Jamie Green (GBR) and Loïc Duval (FRA) completed the clean sweep of the top four for Audi by finishing third and fourth respectively, South African Jonathan Aberdein was the best-placed BMW driver in fifth.

Dutchman Robin Frijns (Audi) finished seventh and therefore is no longer in contention for the title.

Rast versus Müller – the duel was the main act throughout the Saturday. In chilly temperatures in the morning, Rast claimed his sixth pole position of the season. Müller was just a little slower and put his green-and-white Audi on the front row of the grid alongside Rast’s red-and-white car.

The race was a hotly-contested affair. Both rivals battled fiercely throughout the distance, sometimes even with contact. Müller came out on top in the dash towards the first corner after the start, was alongside Rast and the two Audis tangled twice, forcing Rast to run wide, enabling Müller to take the lead. Cleverly executed tactical maneuvers led to multiple lead changes, but also came along with further contact. The duel was hard, but remained largely fair.

Temporarily, it looked as if Jamie Green could come up to help his Audi Sport Team Rosberg teammate Rast. At least he closed up to the front-runners.

After the mandatory pit stop with tire change, Rast briefly dropped back to fourth, but the 34-year-old quickly closed up to the rear end of Müller’s car again. Rast wanted to make a decisive move on the final lap but overlooked the pit board indicating the final lap and then, there was the checkered flag, without an opportunity for Rast to mount the challenge he had planned.

The German was not only surprised but also annoyed. Müller, Rast, and Green crossed the finish line within one second from each other.

For Wittmann and Newey, the race was already over in the first corner as a result. Later on, Timo Glock (GER, BMW) slid into the gravel trap, prompting another safety car intervention.

The field bunched up for the mandatory double-file IndyCar style formation at the restart on both occasions, but there were no surprises.

Now, first of all, the focus is on the decision in the battle for the title on Sunday. Rast or Müller, that is the big question on Sunday afternoon.