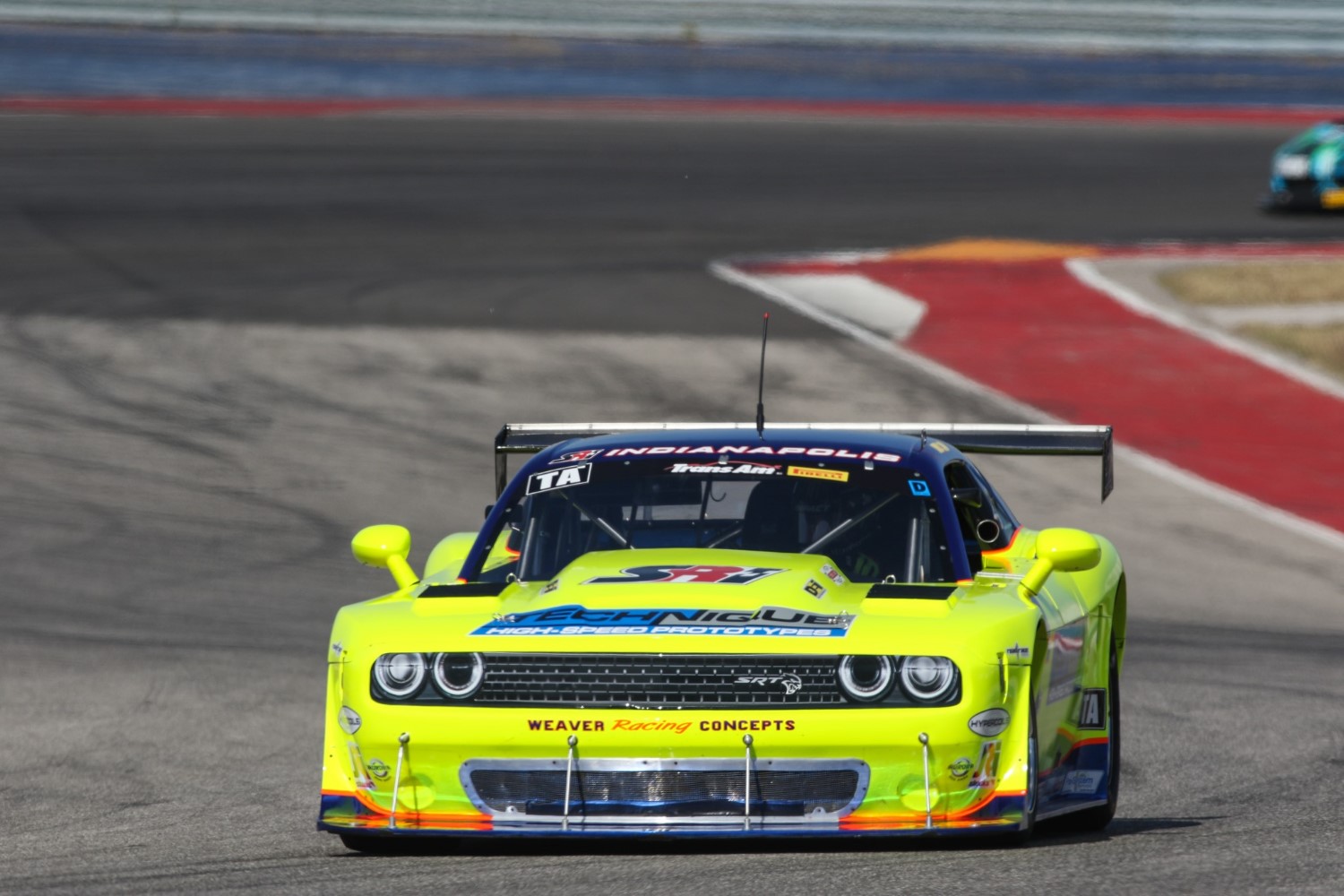 Boris Said (Shown Above) collected his second consecutive Trans Am Series presented by Pirelli pole position on Saturday, leading qualifying for Sunday’s race at Circuit of The Americas.

Said ran a fast lap of 2:08.747-seconds in the No. 2 Dodge Challenger prepared by Pancho Weaver. In his only prior 2020 start, Said captured the pole and finished second in the opening round of the VIR doubleheader. He has 12 career poles in the series.

“Pancho Weaver builds an unbelievable car,” said the 2002 TA champion. “It’s just a blast driving these Trans Am cars. They’re so much fun with all the horsepower, without the ABS and other nonsense that the other cars run. These are old-school cars with a lot of horsepower – regular gated shifting like a NASCAR and 180 mph on the back straight. Circuit of The Americas is a Formula One-grade circuit and it’s an unbelievable place to race. I pitted a lap early today. I had a little bit left, but I decided to save the tires.”

Defending series champion Ernie Francis Jr. was second, 0.195-seconds back with a lap of 2:08.082-seconds in the No. 98 ZF Custom Concepts Ford Mustang, with his session cut five minutes short when he pulled off course due to a cut right-rear tire.

Chris Dyson will start from the inside of the second row, 2:08.161-seconds in the No. 20 Plaid Ford Mustang, joined by Tomi Drissi, 2:11.995-seconds in the No. 8 Lucas Oil Chevrolet Camaro. Drissi was not happy with the car’s handling, feeling like the bodywork was flapping throughout his run.

Amy Ruman was fifth, with a best time of  2:11.995-seconds in the No. 23 McNichols Corvette, followed by Greg Pickett, who earned the Trans Am West Coast Championship pole with a lap of 1:084-seconds in the No. 6 Pickett Racing Ford Mustang. Pickett is the lone driver entered in both the National and West series this weekend. It was the 28th pole of a career that dates back to 1975.

TA2® presented by AEM championship leader Mike Skeen captured his fourth pole position of the season, the fifth of his career, running a lap of 2:12.926-seconds in the No. 77 Liqui Moly/Turn 14 Ford Mustang.

“There is a lot of strategy in qualifying,” said Skeen. “Obviously, we have to use our tires for the whole distance. There is a little bit of tire degradation with these cars if we’re abusing them for the whole time. You try to get it done in as few laps as possible in qualifying. Rafa (Matos) had a problem. He has had a lot of pace all weekend, but he pulled off after his out lap. I know he will have a lot of pace in the race. This puts us in a good spot to get a good start. Hopefully, we can keep in clean and get through Turn 1, and then go out and collect some points. But we’re always out there to win races. We want to collect as many trophies as we can. But at the same time, we’ve got to be careful and keep the car clean to get to the finish and get some points.”

Cameron Lawrence was second (2:13.586-seconds) in the No. 8 3-Dimensional Services Group Ford Mustang. He was followed by Matos, who pitted after his out lap for an adjustment in the pits. Matos returned in the closing minutes and turned the third fastest-lap, 2:14.238-seconds, despite facing throttle issues in the No. 7 Silver Hare Racing Camaro.

Champ Car legend Paul Tracy turned in the fourth-best lap, 2:14.589-seconds in the No. 87 3-Dimensional Mustang. He will be making his third Trans Am start, having raced twice with the series in 2018.

“Qualifying was good,” Tracy said. “We had a lot of problems through the weekend with every session there was something going on with the car. We finally got it sorted out for qualifying. It was my first time feeling the car under full power. I put a decent lap together, it wasn’t the perfect lap, but pretty happy to be fourth overall. I think a top three was on the table but Rafa (Matos) – who’s been fast all weekend – came out and jumped in front of us. But, I can’t be disappointed.”

Texas native CJ Cramm will start on pole for the TA2® West Coast Championship in the No. 04 CedarCreekBrewery/EurekaEnergy Chevrolet Camaro.

“We appreciate the opportunity to race in Trans Am,” said Knox, who has co-driven with Skeen in a Mercedes for Lone Star in IMSA competition. “Everyone has been wonderful to us, and we’re excited to be here. We had a perfect car for qualifying. It’s the best the car’s run all week. It’s a brand-new car – this is the first time it’s been out on the track.”

Coming off his first career victory in SGT, Adrian Wlostowski led qualifying for the first time, capturing the pole with a lap of 2:17.249-seconds in the No. 96 F.A.S.T Auto Racing Ford Mustang.

“COTA is one of the tracks we know pretty well, we’ve been here three times,” said the New York City-based competitor. “We are 26 points back from (Lee) Saunders so all of our attention coming into this weekend was to win qualifying. We treated qualifying like it was the race. We put so much attention in getting those three extra bonus points. Now we will reset and focus on tomorrow’s race.”

Texan Lou Gigliotti ran 2:18.778-seconds on his final lap in the No. 28 G2 Performance Corvette, followed by Aaron Pierce, 2:20.247-seconds in the No. 26 Logical Systems/Sam Piece Chevy Corvette. Class point leader Lee Saunders had a part failure and will start seventh.

In GT, Billy Griffin captured his first pole on his final lap, running 2:22.069-seconds in the No. 14 Griffin Auto Care/Sheehan’s Towing Ford Mustang. Austin’s Sean Young was second and earned the Trans Am West pole, running 2:23.052-seconds in the No. 74 Corsair Racing Aston Martin Vantage GT4. Tim Horrell, a five-time GT pole winner this season, was third in the No. 45 Breathless Racing Porsche GT4 Clubsport.