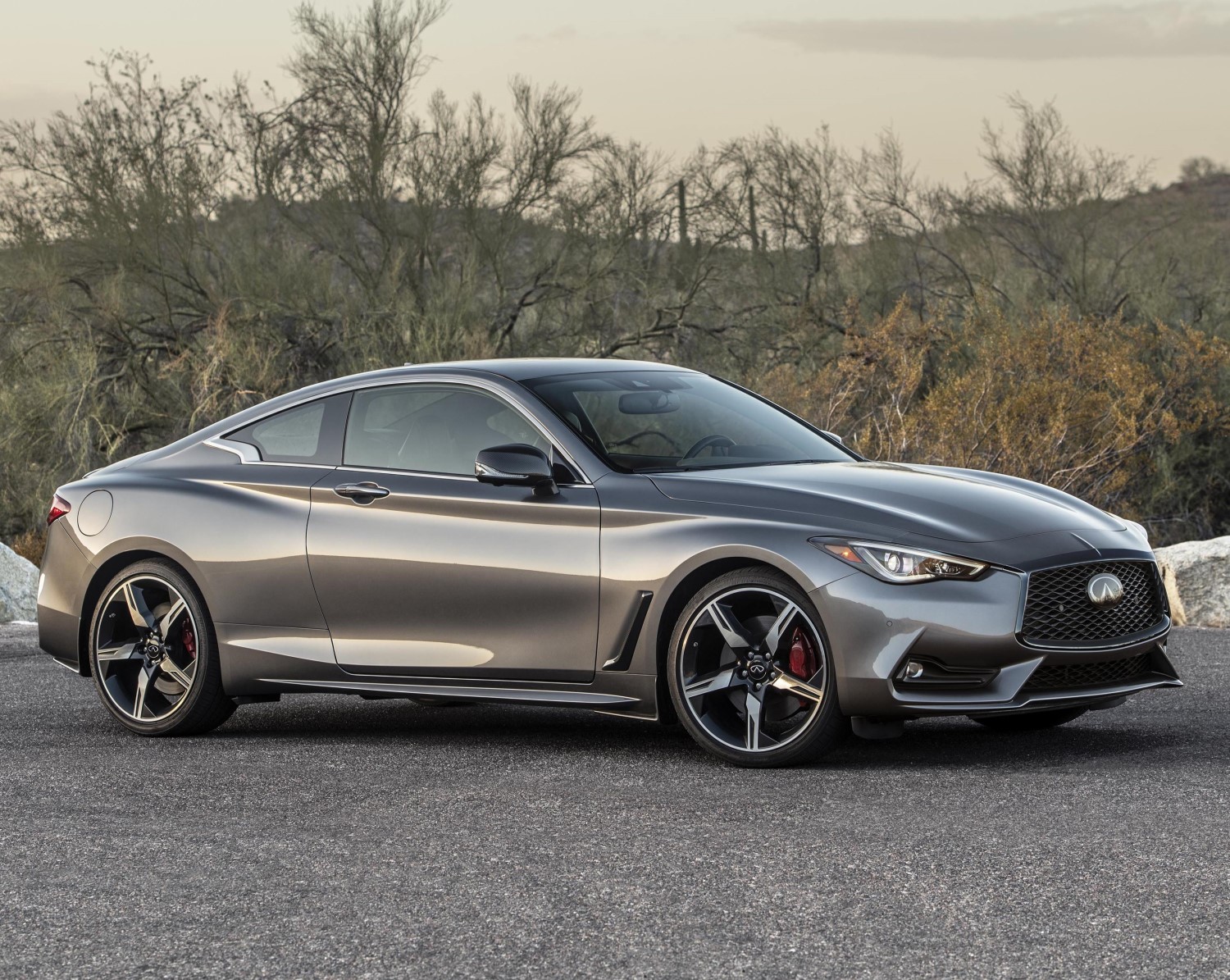 Infiniti is an interesting brand. It is trying to compete with established luxury brands but it doesn’t have much racing pedigree to back things up. They used to have cars such as the G35 that went straight after the sports sedan market but those days are gone. Today, they only have five basic models.

Out of those five, three are SUVs in small, medium and large sizes. The other two vehicles are sedans knows as the Q50 four-door sedan and the Q60 coupe. The Q60 coupe can be had in various flavors but our favorite is the top of the line Red Sport 400 which is the sportiest vehicle that Infiniti sells at the moment.

Infiniti does not sell many Q60 models which happens to be their worst selling vehicle. People buy 8 times as many QX60s as they do the Q60. That is very unfortunate because the Q60 has some great qualities and is a very attractive car. Why would you want to drive an SUV when a car with these sexy lines is in the same showroom?

The exterior styling has daring curves and it has a wide and powerful stance. As Infiniti says “the Q60’s aggressive stance gives an impression of stability and driving potential, while its low center of gravity has a positive overall effect on driving dynamics.”

Infiniti engineers paid special attention to the Q60’s noise, vibration and harshness levels. Along with suspension insulation and rigid cross-members, Active Noise Cancellation is fitted to all Q60 models, helping to prevent negative engine noise frequencies from intruding on the calm of the cabin.

Our car had the Bose audio system with 13 speakers. The class-leading audio setup has been tailored to the acoustics of the Q60’s cabin and sounds amazing. The rest of the interior is about high quality materials and fit and finish. The infotainment system has two screens, one for the map and other features and one for basic vehicle controls such as the audio controls. The system works very well and is pretty easy to use but there are so many features that it will take you a long time to figure out everything.

The centerpiece of the Q60 Red Sport 400 is what is under the hood and it is special. All Q60s are powered by a 3.0 liter V6 with twin turbochargers. The Red Sport 400 has a full 400 hp at 6400 rpm. The engine also features lightweight aluminum construction and low mechanical friction for better performance and fuel economy.

Chief among the engine’s weight-saving elements is the adoption of spray bore coating for the engine block and integrated exhaust manifold for cylinder heads. Not only does this make the engine lighter, but this also aids cooling as heat can dissipate more effectively.

One of the many other significant features is the adoption of an integrated exhaust manifold, built into the cylinder head, which positions the catalytic converter closer to the exhaust point. This results in a shorter flow path for the hot exhaust gases, allowing the catalytic converter to heat up almost instantly, improve response, reduce emissions from a cold start and save weight by making the engine more compact than before.

In addition, the 400-horsepower version features a turbine speed sensor, which allows for the twin-turbo system to perform at up to 220,000 rpm at steady condition and 240,000 rpm at transient condition. With greater capacity for faster revolutions, the twin turbochargers boost the higher-powered version of the engine to deliver higher power and torque.

The turbo speed sensor on the 400-horsepower version helps produce up to 30 percent more power. Boost pressure is 14.7 psi, versus 9.5 psi for the 300-horsepower version. Both versions of the engine also feature a water-cooled intercooler system to further improve performance and efficiency. The system rapidly cools air as it enters the twin-turbo system, reducing turbo lag and allowing for more immediate acceleration.

All 2020 Q60 powertrains are matched to an advanced seven-speed, electronically controlled automatic transmission with manual shift mode and standard steering wheel-mounted paddle shifters on 400 models. The gearbox features improved logic and hardware to handle the power output of the VR-series engines.

In addition, the Q60’s Adaptive Shift Control enhances gear selection by using a lateral acceleration sensor to detect changes in the road, such as hills and turns. Sport mode allows the driver to select a more aggressive shift pattern with automatic up and down shifting at higher rpm.

The Q60 includes Direct Adaptive Steering which they claim can be personalized to give the driver different levels of feel. This is a steer by wire system that has no mechanical connection between the steering wheel and the tires. There are three redundant electronic systems working so that if one fails, you don’t lose your steering. There is also a traditional mechanical system but there is a clutch in the middle that keeps things separate unless there is an electronic failure.

The system can provide many benefits such as reduced weight, less clutter under the hood, and being able to program the system. However, with a mechanical back up, we are not sure if the weight savings are actually utilized. Steering feel is very important in a driver’s car and despite the lack of mechanical connection, the Q60’s steering feels similar to its competition.

An electronic suspension system, Dynamic Digital Suspension, comes standard on the Red Sport 400 grades and has been designed to offer good handling responses and agility, and enhanced ride comfort thanks to software and hardware upgrades, including a dedicated new set of adaptive dampers. Drivers can change the focus of the suspension from a comfort-biased ride to one which offers more dynamic responses, by placing the electronically adjustable shock absorbers in either Sport or Sport+ modes, providing firmer damping control for more agile handling. In daily driving, it was very difficult to tell the difference in the modes.

The Q60 Red Sport 400 is an excellent car. It is great looking, quick and fun to drive. It also has some very advanced technology on board. It’s too bad that more people do not know about the car and would just shop at other premium brands because they are better known. If you don’t want to follow the crowd, test drive a Q60 and you may be impressed.